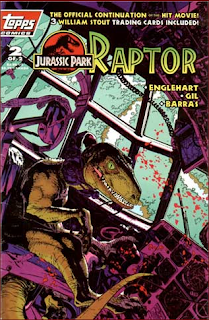 While at Wizard Miami, Michael Golden did this comprehensive interview, now available for listening online. Thanks to Steve for the great questions. This is one of the best interviews I've heard in awhile. :-) If you are a fan of Micronauts, ExoSquad or Jurassic Park, or heck, Michael Golden, give it a gander. It's full o'comic book history.

Here's what the interviewer has to say:


"IT'S THE 25TH PODCASTALYPSE! And it's more exciting than being on an airplane flown by a velociraptor without a pilot's license because Michael Golden's here and he's got some stories to tell. It's a Prometheus Pit full of fun as the King of the Acroyears recounts what it's like being a respected superhero artist while also being known as that guy who worked on all those licensed toy books. It's one of the most experienced storytellers of our time discussing the difference between art and craft and what happens when commercialism usurps artistic integrity. Are the Star Wars prequels as bad as the critics say? Was Star Wars #38 about being obsessed with Star Wars? And what REALLY happened to those Micronaut and GI Joe action figure "production samples" they gave him? Find out all that and more in this "I KEPT THE JET!" edition of the podcastalypse!


Humongous thanks to Michael Golden for allowing me this interview during WizardWorld Miami 2011 and making my 25th episode something really special. Definitely go check out his panels on storytelling during the WizardWorld Convention Tour-the one in Miami was a highlight of the show for me. You can keep up with Michael at his Facebook page and stay on top of his upcoming convention appearances at EvaInkArtistGroup.com. His next convention is Wizard World Toronto March 18-20th then it's back to Florida for MegaCon March 25-27th!"

And HERE'S the link: