Man OR Man O' War-- A beachside reflection on evolution 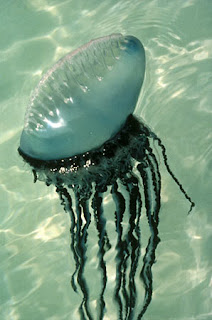 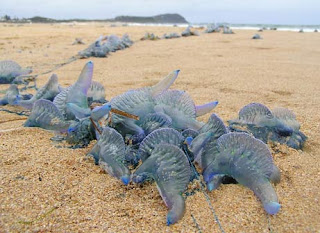 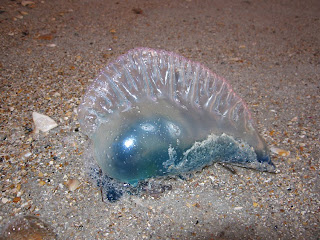 Staying a few days after the Wizard Miami convention for a little fishing in the canals around this part of Florida looking for the elusive Cobra Snakeheads...I didn't find too many fish, BUT the beach near my little apartment in Lauderdale-By-The-Sea, WAS literally COVERED, with what I assumed were jellyfish.

They kind of snuck up on me the second day. i.e. not there one day, and having a big party the next.

Walking along the shore, shoes off and feet in the surf, the first blue invertebrate creature caught my eye, with a beautiful mauve sail, looking like a deflating, multi-colored, kids birthday balloon. On closer inspection...which of course I am wont to do-- it was NOT.

Being a kind-hearted soul and thinking it had a few breaths left in 'em, I gently took the tip of my new sneaker, and tried to nudge the unfortunate critter back into the surf. I certainly wasn't going to touch it. I remember that episode of "Friends." But I did what I could.

"Poor Jellyfish," I thought. "Get thee back into the ocean."

It seemed more resigned to languish on the beach, however. So, after a few attempts I went on my way.

About four hundred feet later, I saw he was NOT alone.

Like the jellyfish version of a whale beaching, the coast around Lauderdale-by-the-sea had amassed an armada of blue carbon dioxide jellyfish sails, baking in the sun. It really looked like a Lilliputian fleet of windjammers in dry dock.

As I was looking closely--as close as I could without touching it that is-- at one particularly large specimen, a surfer walking by, said, "Hey, don't touch that thing. You'll end up in the hospital. That's a Man O' War."

"Isn't it dead," I asked, thinking well, the war is over for these guys.

Didn't have to tell me twice. The long-haired, sea-shell wearing young man seemed to speak from experience. And off he sashayed to catch what I hoped would be a Man O' War free wave...that would ride high and eventually deposit him on the sands as well...taking the same route as our Man O' War, but with a different outcome...

All this, of course, leaving me with much to think about:

Apparently these organisms---these fallen Portuguese Man O' War-- can reach their tentacles from beyond the grave. Wow! Wouldn't that be fantastic!

This was obviously a fact that the normally voracious sea gulls scavenging about seemed to already know. Not even a nibble did they send the Man O' War way. Oh, it also seemed to be a bit of knowledge that the parents letting their toddlers build sandcastles that were dead-venomous-creature adjacent, didn't seem to mind. "Location, location, location, kids!"

"Odd scene," came to mind for some reason.

The second day on the beach, I fully expected the Man O' Wars to be washed out to sea, but there were even more of the bulbous carbon dioxide creatures strewn about! Didn't they know what was good for them?

I noticed once again their oddly compelling beauty, so I decided to do some research of my own. And guess what?!

They are NOT jellyfish at all.

The Portuguese Man-Of-War is something completely different!

"What's the difference?" You may ask. We'll I'll tell you, with a tip of the hat to Wikipedia, and it's fascinating:

"Despite its outward appearance, the man-of-war is not a true jellyfish but a siphonophore, which differ from jellyfish in that they are not actually a single creature, but a colonial organism made up of many minute individuals called zooids. Each of these zooids is highly-specialized and, although structurally similar to other solitary animals, are attached to each other and physiologically integrated to the extent that they are incapable of independent survival."

These ancient creatures, named after the Spanish sailing ships nicknamed Man O' War's, have been bonded together in this way without evolution for millions of years, it seems, and as I read further, there are even tiny fish that have become immune to their venom, and live among the tentacles and sometimes even snack on them.

A symbiotic relationship as it were-- learning to endure the stings, become desensitized, in order to reap some benefit from the compartmentalized mother ship.

"You said Venom!" Well, yes, my surfer dude was right.

They are particularly nasty it seems.

Again, Wikipedia, thank you, because here's the low down:

"The Portuguese Man o' War is responsible for up to 10,000 human stings in Australia each summer, particularly on the east coast, with some others occurring off the coast of South Australia and Western Australia.

"The stinging venom-filled nematocysts[ in the tentacles of the Portuguese Man o' War can paralyze small fish and other prey. Detached tentacles and dead specimens (including those that wash up on shore) can sting just as painfully as the live creature in the water, and may remain potent for hours or even days after the death of the creature or the detachment of the tentacle.

"Stings usually cause severe pain to humans, leaving whip-like, red welts on the skin that normally last 2 or 3 days after the initial sting, though the pain should subside after about an hour. However, the venom can travel to the lymph nodes and may cause, depending on the amount of venom, a more intense pain. A sting may lead to an allergic reaction. There can also be serious effects, including fever, shock, and interference with heart and lung action. Stings may also cause death,although this is rare."

Oh, well, THAT'S a Relief. And no, I was never going to touch one. I figured it was blue and alien looking enough that it probably was not human friendly. Bright Colors=Don't touch, right?

What I love about the article though, is that the first word of advice if you ARE stung by a PMOW is:

"To avoid any further contact with the Portuguese Man o' War."

Uh... thank you, because if I'm horribly stung, I think the first thing I would do is go back and see if we couldn't work out this relationship. Oh wait, I have done that. Hum...LOL

Seriously though, you can read what else to do if stung by a PMOW here: http://en.wikipedia.org/wiki/Portuguese_Man_o'_War

So, armed with knowledge, I still did my jog on the beach the next day, gamely jumping over bulbous Man O'War hurdles, leaving them in my wake, as their little sails bobbed in the strong ocean breeze, decay firmly anchoring them to the white sands.

With the coast already teeming that morning, I sat down to rest among the carnage post run-- just me, a throng of sea gulls nipping at seaweed nearby, lifeless beat-red sun-bathers legs akimbo, and a few intrepid surfers still waiting for that one awesome wave to change them from amphibians by choice to landlubbers again.

The belly of one particular basking and somewhat basting human punctuated the sky nearby, like a over-ripe plumb, striking a silhouette that mimicked almost perfectly that of the unfortunate ancient, primitively made, Man O' War scattered all around him.

This bright red vacationer, in the lime green speedo and the unwilling-dry-docked bright blue invertebrate seemed somewhat akin at that moment--the mix of colors creating one wild watercolor scene.

Sitting amidst this kaleidoscope, I wondered, complex and yet simple as it was, surviving generation after generation, why had not this creature ever evolved to be a cohesive unit, instead remaining a fractionalized group, each compartment so separate from the next, yet essential for survival? Or, most important, why had it not evolved to have created self-aware locomotion, movement, for it's wind-swept life, so that it could lead itself out of troubled waters, avoiding beaching, ruin, and an ultimate demise en masse?

What a simple thing we take for granted. That free will thing. Being able to change course when needed and avoid the rocky coast. Even though, sadly,more often than not... the choice is to forge ahead. Dam the torpedoes.

And, I contemplated the choices in evolution...

But then...again...who am I to say... perhaps the humans baking in the sun are quite happy just the way they are.