Convention Bookings for 2014!-- And here's our partial line-up! 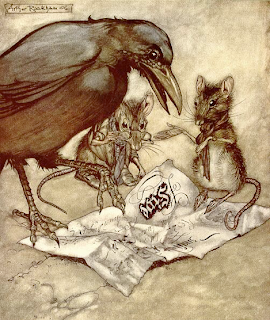 (Lots to Plan for 2014! Illustration by one of my favorites: Arthur Rackham)

Conventions and events 2014 will be upon us before we know it. And I'm already doing the schedule for bookings with Eva Ink Artist Group and our associates, as 2013 comes to a close.

Requirements-- for most of our talent-- are airfare (arriving the day before the show and leaving the day afterwards), hotel and table(s). If there are other requirements, I'll list them next to the artist, or let you know when you inquire via e-mail.

Michael Golden, Mike Zeck, Arthur Suydam, Dennis Calero, Matt Triano, Rodney Ramos, Ric Meyers, Konstantin Komardin… check out the encapsulated bios below! We touch on film, comics, martial arts, animation, gaming, television, and so much more with this talented line-up! And more names to be added in the next few weeks.

We also have suggestions for panels, promo items and more to coordinate with you once booked.

Important: If you already know your dates, please get with me as soon as you can, about the talent you are requesting information on.... And: If we've already spoken about booking a certain talent with you, please reconfirm via e-mail . 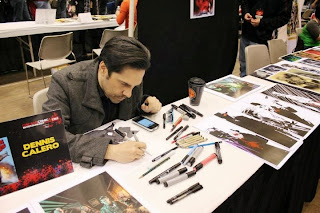 With a style that encompasses super-heroes, film noir, horror and just about any genre you can name, artist Dennis Calero recently finished the highly acclaimed series "Alex Ross's Masks," and is currently the regular sequential artist on "Army of Darkness," with writer Steve Niles.  Recent work also includes "The Shadow," "X-Men Noir" "Legion of Super-Heroes," "Magic: The Gathering," "The Night Stalker," "Star Trek: The Next Generation,"  "Cowboys vs. Aliens,"  "Dungeons and Dragons," and "X-Factor" which was honored with a Harvey Award for Best New Series during his tenure. As well as being a versatile penciler, Dennis is also a sought after colorist, while also working in the world of film and television on his own properties, including "The Devil Inside."  Programing notes: Any number of panels can be arranged with Dennis that encompass overviews of his career, or focus on his amazing skill set. 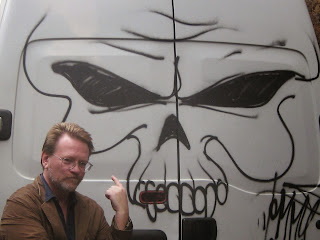 One of THE storytellers in the industry,  influencing generations of comics fans and professionals, Michael Golden boasts creations that are some of the most licensed and enduring in the industry. Co-Creator of Rogue, Bucky O'Hare, Micronauts and "The 'Nam," among much more, Golden is known as one of THE artists on such characters as Batman, Doctor Strange, G.I. Joe and the Punisher. Golden's recent covers can be seen on everything from "Spawn" to the "Walking Dead," to World Wrestling  work (which was featured in a special signing for fans at this year's NYCC). In short, no history of comics is complete without touching on the influence that this legendary artist has had on this industry. Recent books on the colorful life and vibrant art of Golden include "Michael Golden: Alchemy" "Modern Masters: Michael Golden" and "Excess: The Art of Michael Golden," with a new sketchbook planned for 2014 appearances. In addition, having served as both Senior Art Director at Marvel Comics and Senior Editor at DC Comics, Golden's lectures and classes in storytelling are sought after world wide, with recent venues including places as diverse as Spain, France, Russia, Norway and China. Programing Notes: Various panels on the art of comic books can be scheduled with Michael, to highlight this special event at your show.  (Note: Michael has specific table and listing requirements. And will be limiting his convention schedule.) 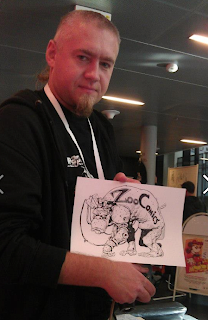 Komardin is an award-winning sequential artist, graphic artist and animator. His work includes the BD magazines “Veles,” “Hacker,” “Max Cooler,” “Moulin Rouge,” “Timof” which published his story “Siberian Dreams,” and the renowned comics “Agent Z,” “Sit-o-city,” “Gate of Alice,” and “Mechanics of Senses.” Konstantin was awarded the Grand Prize for “The Site of Polis” at the Moscow Comics Festival.  His animation works include the concept designs on “Elka,” “Man with the Wind in his Head,” which was featured at the Suzdal Film Festival, “Tram,” “Spindel” which was honored at the Moscow Short Film Festival, and “The Man in Penze Nez,” which screened at both the Suzdal Film Festival and the Moscow International Film Festival.  Programing Notes: Konstantin can do panels on animation as well as sequential art for your show, and talk about the cross-cultural world of comics. 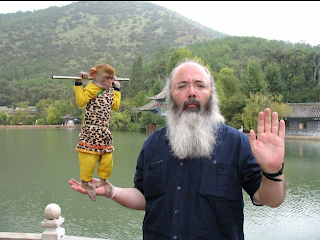 Novelist Richard S. Meyers is responsible for the Marvel prose novel featuring the Hulk among others, but around 100 other books as well! Creator of the Destroyer series, Ric is also the writer of "Santa Confidential," illustrated beautifully by artist Chris Browne of "Hagar the Horrible" fame, "The Kung Fu Movie Book," featuring everything you want to know about the martial arts world, and is the director of "The Kung Fu Movie Movie."  His commentary is sought after on director cuts of movies and television compilations worldwide. As well as acting (most recently as a villain in a Scotland filmed production), Ric has been called on as an expert consultant for such projects as "Twilight Zone," and "Kung Fu Panda." He yearly runs the Marital Arts movie segments at the San Diego Comic Con.  Programing Notes: Ric is available for a plethora of programming, Kung Fu, comics, film and otherwise! Screening of his movie works are also possible. Artist Rodney Ramos has worked on just about every major character for Marvel Comics and DC Comics with a flourish that makes him a master at his craft. He began his storied journey in comics as a Romita Raider at Marvel Comics, learning his craft under the legendary John Romita, Sr. Regular work on titles like "Psi-Force," "What The!?" "Thundercats" "Punisher War Journal," "Amazing Spider-Man," and "Iron Man" followed, as well as work on Green Lantern, Batman, Wonder Woman, and much more. His works include masterful craftsmanship for clients ranging from Valiant, Malibu, Acclaim, Marvel UK, and Neal Adams Continuity Studios, in addition to Marvel and DC. He reached cult status with his work on DC's "Transmetropolitan," a huge fan favorite, and most recently over Simon Bisley's pencils at Legendary. 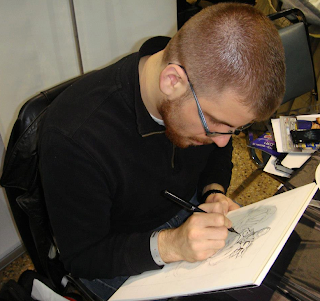 Matt Triano is known for his illustrative work on both super-hero and fantasy/horror projects. "Grimm's Myths and Legends," "Robyn Hood," "Call of Wonderland," "Sleepy Hollow," "The Story of Mankind" for the Discovery Channel, "Shark Week" illustrations for Discovery Channel, "The Shadow," "The Lone Ranger Annual," and more highlight his amazing work and insistence on research and story setting. His attention to detail and design has most recently been seen in the series "Sherlock Holmes: The Liverpool Demon," which was released to great reviews. In addition to his story work, Matt also is a storyboard artist, working on motion comics projects and developing custom comics for high profile clients. Other works include material for Robin Hood Charities in New York,  work on Marvel Trading Cards and Batman work for the "DC Halloween Special."  Programing Notes: Matt is available for programming at all the shows he attends. 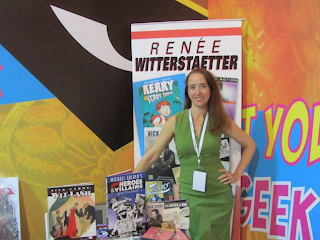 Writer, editor, colorist and publisher Renee Witterstaetter has edited such books as "Hercules," "Xena," "X-Files," "Conan," "She-Hulk,"  "The Marvel Holiday Special," "Impossible Man Summer Special," and too many books to mention here. As a film professional, she has worked on such movies as "Red Dragon" and "Rush Hour 2," while also behind the scenes, racking up credits on dozens of music videos and commercials for artists as diverse as Madonna, Seal and Usher.  Her books as a writer include: "Jackie Chan: Dying for Action," "Nick Cardy: The Artist at War," "Excess: The Art of Michael Golden," "Nick Cardy: Wit-Lash," "Art of the Barbarian," and her children's book "Kerry and the Scary Things." In addition, combining her film work with comics, she is a producer on DVD's on various comic book creators and talents in other fields as well.   Programing Notes: Renee is available for portfolio reviews and commentary on working in the publishing industry. 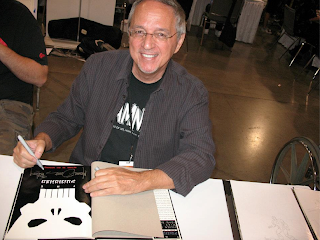 When discussing comics heavy hitter, Mike Zeck, you'd have to argue which is his most influential work, or which is most deeply embossed on our pop culture. His series "Kraven's Last Hunt," took Spider-man to a whole new level and has been voted by readers as the "Greatest Spider-Man story ever told." His subsequent work on the Punisher  with "Cricle of Blood," cemented him as one of the THE artists for the character, while the series "Secret Wars," set comic book readership on their ears, and heralded Zeck's creation of the black and white Spider-Man costume, still around as the attire of the super-villain, Venom. His work on Captain American also stands out as some of the most influential in the industry, and iconic images of this and other characters such as Superman and Batman, are etched in comic history.  In fact, Zeck images are featured on Marvel merchandising ad nauseam year after year, evidence of his enduring popularity. Zeck's new series with writer Steven Grant (creator of the hit movie "Two Guns"), "Damned," has just been released in a new volume by IDW Publishing. (Note that Mike will be doing very limited appearances, and certain conditions apply. Please contact me for details. )


Okay, let's get the ball rolling!

I may be adding a few more very exciting artist names before the end of the year, as well as a few names from the world of film and television. 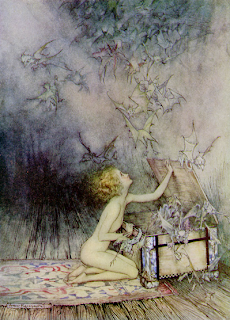 Now git thee to a comic convention --Bat fan or otherwise!  (Another illo by the amazing Arthur Rackham to wrap up the festivities.)  :-)
Posted by Eva Ink Artist Group / Pros and Cons Celebrity Booking / HappySpacePOPCon.com at 3:18 PM No comments: