Happy Birthday to Stan Lee, the One and Only! -- And: Stan (and Me) Through the Decades!

I don't know how he does it, but then, Stan has accomplished so much!  But this one has always amazed me. How does he stay so... well... so STAN!

During the course of my association in this industry, from the days at the Dallas Fantasy Faire as the Co-Chair when I was young and green, to being an assistant editor at DC (still young and green),  to editor at Marvel (just green), and now to being publisher and artists agent (whatever is not green), it just worked out that at least once a decade or so--sometimes more--I've had the fun of having my photo taken with Stan Lee (with varying degrees of success mind you).


What always tickled we was that with each passing event,  how Stan never really changed that much. But hair, weight, and other statistics were always in flux when it came to me! (I particularly like the first photo where I'm sporting that cool Mullet.)

I almost want to stamp "Presented by Stan Lee" on the back of each one. It's an unequivicable seal of approval you know?!

It's a reminder to  me what a constant Stan has been in my life/career now for some time. Even before I edited a single story,  why, I knew the name--In fact from the first time I stole one of my brother's "Spider-man" comics when I was six or so!

I guess that's why to this day, whenever I do see Stan, it still makes me giddy with delight.

My photographic record aside, in truth, believer, Stan deserves all the accolades coming his way today on his 93rd Birthday. Since his days at Marvel to the present, Stan has been a champion of so much I love about comics, helping propel our industry to new levels.

If anyone has a legacy it's him. And in return, we love him.

So, here's to you Stan, and Happy Birthday!  You're the Man!


Here's Hoping All the Batteries Are Included! 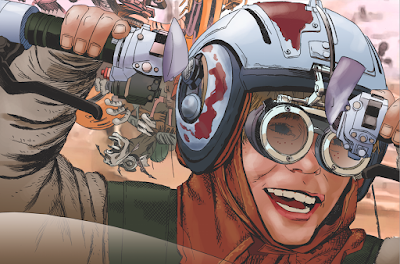 And wishing you a 2016 to break all records!
Posted by Eva Ink Artist Group / Pros and Cons Celebrity Booking / HappySpacePOPCon.com at 7:17 PM No comments:

For Immediate Release:
December 2, 2015
New Orleans— Long tauted as THE artist to come to when you need a picture that says a 1,000 words, illustrator Michael Golden’s dynamic Captain American and crew limited edition comic book will be made available to Wizard Comic Con New Orleans VIP’s this January!  Just in time for the movie release, we might add!

Here are the details:

THE LANDSCAPE OF THE MARVEL U IS CHANGING AND IT'S TIME TO DECIDE: WHOSE SIDE ARE YOU ON?

A conflict has been brewing in the Marvel Universe for over a year, threatening to pit friend against friend, brother against brother--and all it will take is a single misstep to cost thousands their lives and ignite the fuse! As the war claims its first victims, no one is safe as teams, friendships, and families begin to fall apart. Civil War, a Marvel Comics event in seven parts, stars Spider-Man, the New Avengers, the Fantastic Four, the X-Men and the entirety of the Marvel pantheon! Civil War - the cross-over that rewrites the rules - begins here in this double-sized first issue!

Michael will be present at the show and available to autograph copies of this collectible comic!


For more information on how to get  your exclusive Michael Golden cover, go to: http://www.wizardworld.com/civilwar1.html