Erma Nell Witterstaetter (born Hicks), age 85,  passed from this world unexpectedly on February 13, 2018 in a local hospital. Beloved Mother, Sister, Grandma and Friend, she was preceded in death by her husband of 40 years,  Calvin Raymond Witterstaetter, Sr. They lived their married life in Wake Village, Texas, and raised their family there, and Erma continued to make it her home after Raymond’s death in 1993.

Erma  was born January 5, 1933 to Eva Inez Vann Hicks and George Lester Hicks, in Texarkana, Tx. during the great depression. Her beginnings were humble, as her parents tried to build a life for her and her two sisters.  Times were hard. Erma often talked about the two room house that her father built for them, the dresses her mother made for her from flour sacks, how her father’s foreman job with WPA was a godsend and source of pride, and how amazing it was to her as a young person, when they were able to move into a house with indoor plumbing.

This hard life was buffered by a close family and a strong willed mother who instilled in her a work ethic that would stay with her for literally her entire life.

She would often comment on the changes that she saw in the span of her life.

She had seen wars come and go— albeit during some she was a child listening to the radio and fireside chats; She saw TV become commonplace and marveled when they started being in color, and now… the digital age; She listened to the first words of the first man on the moon in real time; Saw the Berlin Wall go up... and saw it go down; She saw Elvis first hand at the downtown Texarkana auditorium, She heard, a young preacher talk about  'his dream" and became part of it first hand with her job as a personnel manager at Sears; She saw it unfold in a fragile nation when our young President lost his dream so suddenly in Dallas; She heard about the "British Invasion” as it happened; And saw loved ones go off to Vietnam;— She saw the advent of the message machine, fax machine, cell phones, internet, emails, Facebook, twitter, texting…so much…  all coming in fast succession.

And through it all, she was there. The reed in the wind.

Erma was no doubt a Pioneer.

She and Raymond met at East Texas Motor Freight, and after taking time off to have her first child, her friend Barbara Hall led her to a job opening at Sears Roebuck.

The rest is history…

Erma worked at Sears in Texarkana for 54 years, where many people in town knew her. In fact she rose to a management position becoming the very first female Personnel Manager, AND  at one time being the #2 in command only to store manager David Zimmerman, and THAT at a time when most women did not make it to those levels.  Through that position that she enjoyed so greatly, she was able to give many people their first jobs. Believing in them. Giving them a chance. She loved that.

There is hardly a time that she was out in Texarkana when someone didn’t say "Hello Mrs. Witterstaetter," and “Thank you.”

Even after her retirement and her husbands death, she went back to work at Sears in sales, in various departments, ultimately staying  in appliances for many years. As she would always say she went back to work  “To keep her mind sharp.”  In her usual “I’m not going anywhere manner,” she  survived many changes in store managers and protocols, in the newly evolving corporate environment that sought to pasture older employees.  But she’d have none of that, and she endured until she was 84 and a back problem would not allow her to continue.

We like to joke that Sears in Central Mall, just could NOT survive without her.  And it didn’t.

Erma served as a true role-model is so many ways, most evidenced by the way she handled her first diagnosis with breast cancer mid-life, her second diagnoses 10 years later, and her most recent battle with Uterine and breast cancer.  She was a regular face at the Race-for-the Cure, and even with her most recent battle, she was optimistic and determined to stay around for as long as possible, and her treatments were showing progress. And in the end... it was not the cancer that took her...

Through it all, Erma stayed a wonderful woman of faith.

She was a member of  Wake Village First Baptist Church for 65 years, and at the time of her death was the person who had been there the longest at her church home.  She was actively involved  with her Sunday School class and Evergreens. And true to her Christian spirit, she was there whenever someone needed help, a meal delivered, a prayer said.

She loved traveling and made it to such diverse places as Egypt, Norway, Ireland, Iceland, Greenland, Italy, Cuba and more.  Some of her favorite trips were with Raymond to Copper Canyon in Mexico.  And since his death, she continue to travel extensively with her daughter. She loved playing Dominos, and playing with her Tuesday night card group, and  really enjoyed almost any game for that matter.

But what she most loved was spending time with her family.  Her happiest times were when all of her every growing family was at her house for dinner. The smile on her face… said it all.

In fact, if you asked my Mom what her greatest achievement was, this is what she'd say: My Family.

She worried about, fretted over, and adored them all. Taking every opportunity to pick them up from school or driving across town to take them to church. And she never forgot a Christmas or a birthday or an anniversary. She always sent those she loved out to eat for their anniversaries.  At her death, some of the notes in her purse were about what restaurants  to buy the gift certificates at for this years milestones… she so wanted to be here for them…

And like all true love, she asked nothing in return but maybe... a phone call or a visit.  And sometimes if that didn’t happen, she forgave even that. "They'd do it if they could."

It's hard to imagine her journey of 85 years—

How do we describe this wonderful, spirited and determined woman?  The constant for us.  In a world still changing, always... changing. She was always the same.

The touchstone in a storm.

How do we describe Erma, our Mom-- a pioneer in her work aspiring to raise herself up from her depression era beginnings pursing business school after High School, and fashioning herself into the christian and self-less person that she was?

There are two words that describe her most accurately: Unconditional Love.

And she would not have had it any other way.

In a 2008 interview that her sister Lana was doing for genealogy books she said:  “My family is so important to me, and I love them all very much.”

We love you too, Mom. On February 13, we lost our rock, our best friend and our biggest fan.
And we missed you the very second you were gone.

Visitation for Erma will be from 5:00-6:30, February 16, at Chapelwood Funeral Home.  Her funeral is planned for 2:00 in the afternoon on February 17th at Chapelwood. She will be buried next to Raymond. 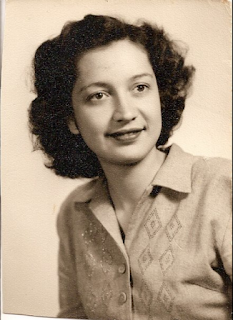