My Favorite Drug--For your consideration 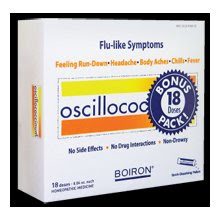 With several relatives and friends telling me they are getting pesky March flu symptoms, I wanted to give a hopefully helpful tip about what always seems to do it for me.

Traveling as I do, I always keep Oscillococcinum in my kit. I was first turned on to this homeopathic remedy working on film shoots in Los Angeles. A director on a particular commercial was coming down with the flu and wouldn't even go to work until one of the Production Assistants found a drug store that had Oscillococcinum.

I had never heard of it before, much less being able to spell it or pronounce it, but we eventually located the stuff, got him medicated and back to work.

And I have to say, since then, it's been my stand by miracle flu remedy. Oscillococcinum works best right when you feel the flu symptoms coming on, but if you take it right away, you won't even get sick.

Better yet, it's available over the counter.

So that's my tip for the day, and no, I'm not being paid by them (yet). Just want us all to have a healthy March, headed into a beautiful spring.