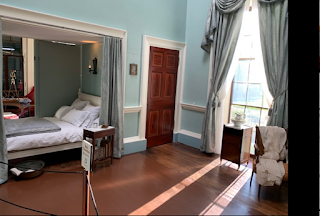 Visiting Monticello the day before election day was a tad surreal. It hasn't really opened up much, and tours are self guided. You can walk the grounds virtually alone, except for whispers from the past... I've been there before, so I know the rooms and the artifacts by heart, so the lack of guide was no trouble to me. In truth, it was nice without the crowd in some ways. Taking my time in the Great Hall.: Remembering the stories of those who had come through the doors; The tales of the busts lining his walls-- those he admired-- Washington, Franklin, Jones, Lafayette, and yes even Hamilton; The adventurous tales to go with his artifacts from Lewis and Clark! He was so fascinated by the Dinosaur bones most of all. It's such an amazing time capsule, this place. To me it speaks of dreams. And today was the most singular of days, being able to linger alone in the rooms most intimate to Jefferson. His sanctuary. The room beyond is where he did many scientific writings and experiments, the one in which his pet Mockingbird sat on his shoulder and sang as he played the violin, his library of many books not far to the left. The room in the foreground, his private parlor and dressing room with the big window that let in the sun each dawn, his actual boots and other clothing belonging to him still there, at the ready, waiting to start off on his daily ride. And in between, his alcove bed. The one in which he died. I couldn't help but think of July 4, `1826. The scene that was here: Mr. Jefferson, generally robust, had been declining in health for 2 weeks. He knew he did not have long. He kept asking the date. Asking the time "Is it July 4th yet?" When at last he was told it was "It is July 4th." , he said "Ah... good." He refused any further medication from the doctor administering to his pain, and passed shortly thereafter... He wanted to live long enough to see the 50th Anniversary of our nation. The one he helped form from spit and polish. And through shear force of will, he did just that. I think sometimes of the oddness of dying... how all those little things that make up any of us, any individual, just... leaves... like a whisper escaping from the bone bag that contained them. Just like that. The voice, the smile, the talent for language perhaps, the talent for words, the little things they'd say, the way they'd cross their leg when they knew someone was looking at them...just gone. Anyone there knows the moment it happens, when the spark moves somewhere else. But nobody knows if that same alchemy of ingredients will ever be in one person, one place again. All that is left are those we loved and who loved us, and the good or the bad that we left behind. In short: I don't want to know who you vote for. I don't care. If you type it on my page, I'll delete it. But I hope you will vote . Because it's a glorious thing. People fought for it. People died for it. People dreamed a dream and made it so. Wednesday, the curtains will open. It will be a new day. And we each will continue to make the differences we can, until we too fade into whisper. But until then, we'll take our own unique magic mix of assets and see what we can create from what we are given. And if not from what we are given,then from what we can dream. And no matter what. No matter the outcome, you know what...we'll be okay.
Posted by Eva Ink Artist Group / Pros and Cons Celebrity Booking / HappySpacePOPCon.com at 1:03 PM 1 comment: