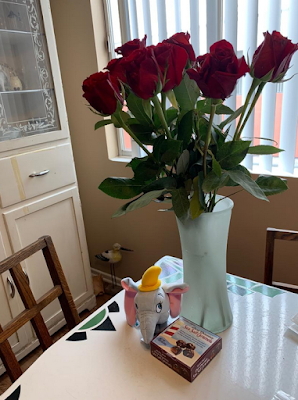 Yesterday was my birthday.

It is the second one without the familiar call and the familiar voice, relating to me the circumstances of my birth.

After many years of practice though, I know it by heart, and can relate it to you thus:


Mom was at my Aunt Aba’s house. On a Sunday. After church. During lunch, her water broke, so they finished eating (priorities) and then took her to the hospital. But much as I am still, I didn’t arrive until the evening…and as a result, I never have been a morning person.

I don’t think I was a particularly painful birth. I’m sure I caused her pain later… And if so , it causes me much regret. But IF so, she hardly commented on it.

Mom was love that way.

So here I am… no phone call… and left to my own devices, here is what I did:

I stayed in my pajamas all day.

I proceeded to place all the paintings that had been sitting in the corner for the last year in proper and pleasing places, and then found I had no idea where the hammer was.

I went online and looked at houses totally out of my price range and which I don’t intend on buying, but it was fun to look.

I googled an old friend out of curiosity to see if he is still alive. He is.

I worked a little, but not much.

I ran on the treadmill for 2 miles, did sit ups, leg curls, and weights. At one point I tried to do chin ups like Linda Hamilton preparing for Apocolypco. It did not go well.

I smelled the roses. (Thank you to who sent them.)

I bought a Mary Poppins tea pot that was on clearance. And then remembered I don’t have any British friends in LA any more and certainly no PG TIPS. And I hardly ever drink tea.

For lunch I had a mishmosh of eggs, salsa (Pace of course), jalapeños, and cherry tomatoes. And not the norm, I had a very fattening toasted egg bagel with cream cheese.

I drank coffee. A lot. It’s an antioxidant so I don’t’ feel bad about it. Don’t judge me.

I polished the furniture in my LA apartment and swept the hardwood floors. At one point I recreated a scene from “Risky Business,” but we won’t go into that.

I sang a song. Out loud. Not just in my head. I’m sure people could probably hear.

(I admit I may have sang two.)

I tried to assemble some electronic candles covered in silver glitter. Now I am as well.

I drank a glass of red wine. Also an antioxidant. Don't judge me.

I missed my Mom.

I enjoyed this singular day of doing “nothing.” A rare occurrence, and a chance to reflect on gratefulness:

For every hour and every second so far…

Thanks to everyone that stopped by to say “hello.” It meant alot.

And in the end, I sat on the balcony and watched a sunset that looked like a Phoenix rising from the ashes.

I feel that way every year.