It's NO "Ruse": Artist Minck Oosterveer Reunites with Writer Mark Waid for Issue of the Top-Selling Series

Steampunk Meets Witty Repartee and a Hint of Magic! 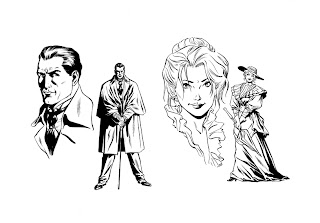 New York, NY-- It's just been announced that award-winning artist Minck Oosterveer, will once again collaborate with writer Mark Waid on a new story-- this one on the Waid created series, "Ruse" published by Marvel Comics.

Originally debuting at CrossGen, "Ruse" quickly became that companies top series, and the property was purchased by Disney when CrossGen was no more. With Marvel now under the Disney umbrella, "Ruse" is having a long awaited revival.

Creator Mark Waid describes the series as "A steampunk Sherlock Holmes with romance, witty repartee, and a hint of magic."

What better artist for this issue of "Ruse" than Minck Oosterveer, known for bringing all of those elements to his own properties and commercial artwork.

In fact, Oosterveer is known world wide for a plethora of comic strips, movie work, and sequential art. Most notably here in the United States for such books as "Zombie Tales" and "The Unknown" also with Waid!

The "Nicky Saxx" co-creator is strongly influenced by Milton Caniff, Alex Raymond, and Will Eisner. After working for a studio on productions like 'Tom & Jerry', 'Sesame Street', 'Paddington', 'Ovide' and 'Spider-Man', Minck Oosterveer moved more in the direction of another stylistic forte, working with Willem Ritstier on the series "Claudia Brücken" for the Franco-Belgian publishing-house 'les editons Lombard' and Tintin-Magazine.

He will bring all of this experience to "Ruse."

"What makes the series so special," according to Oosterveer, "is most of all the interaction between the arrogant detective Simon Archer and his partner Emma Bishop, who he keeps on referring to as 'his assistant'.

"The adventurous stories with a bit of mystery and the supernatural," make it a great project to work on-- it's very interesting."

As far as the approach the readers can expect, Minck is a big fan of the original series from "CrossGen," and wants to be true to that flavor. Something readers from that first run will certainly love.

"With 'Ruse' I will use my more classical style I used when I did the Flash Gordon-like newspaper adventure comic "Zodiak". And although I'll be pencilling and inking, which I'm used to do, hopefully readers will like my approach."

Currently, Oosterveer is scheduled for several European and US shows in 2011, with more to follow.

Issue #3 of "Ruse" with story by Mark Waid and pencils and inks by Minck Oosterveer is in the works now. Look for Marvel's ordering information on the series and on this particular issue featuring the reunion of these two wonderful creators!

For information on the Oosterveer, his commissions, his schedule and appearances contact Renee at evaink@aol.com