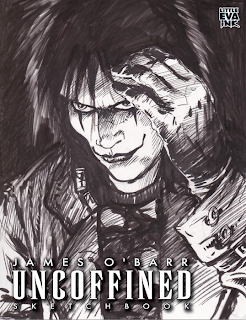 New York, NY-- We are pleased to announce that Eva Ink Publishing is soliciting our first in a series of James O'Barr sketchbooks to coincide with his convention appearances with Eva Ink.

This first in a series book will feature never before published James O'Barr sketches in a striking black and white format. 36 pages. The title "Uncoffined" conjures the fact that these sketches are being shared from James's personal collection, in published format, for the first time.

The book will be available in the next Diamond Catalogue in the Eva Ink (aka Little Eva Ink) section, and will be offered in both a Signed and a Sketch version.

James OBarr was born in a trailer in Detroit just in time to seeMarilyn Monroe and John Kennedy die,but claims no responsibility foreither. He spent his first seven years in an orphanage and foster careand as such had poor communication skills.
When he was adopted he brought along his crayonsand has been using them ever since.
While stationed in Berlin, in the late 70's he created The Crow as an attempt to dealwith the death of his fiance at the hands of a drunk driver. It tooknearly ten years to finish and no publisher was interested in it("toogloomy,too confusing..")until,on a whim, Caliber published the firstissue in 1989.
It is currently the best selling independent graphicnovel of all time at over 3/4 of a million copies sold,though he isnot rich by any means.
In 1993 his book was adapted into the cult film of the same namestarring Brandon Lee. He would like you to know that nearly all of themoney made from the film was donated to children's charities and hehad nothing to do with the subsequent 3 sequels or TV show(though hedoes like Mark DaCascos)and scoffs at the current plans to remake thefirst film. Pshawwww,he says.
He has worked for every major publisher,with the exception of DCwho is apparently afraid of what he would do with Batman.In Italy,1995, he won the Academy Award of comics,the Yellow Kidaward for best storyteller.

He  paints draws and writes every day.


Be sure to place your orders now for "James O'Barr: Uncoffined" with your local comic shop, and/or contact Eva Ink at: evaink@aol.com to inquire about convention bookings or book purchasing.
Posted by Eva Ink Artist Group / Pros and Cons Celebrity Booking / HappySpacePOPCon.com at 3:36 PM 2 comments: