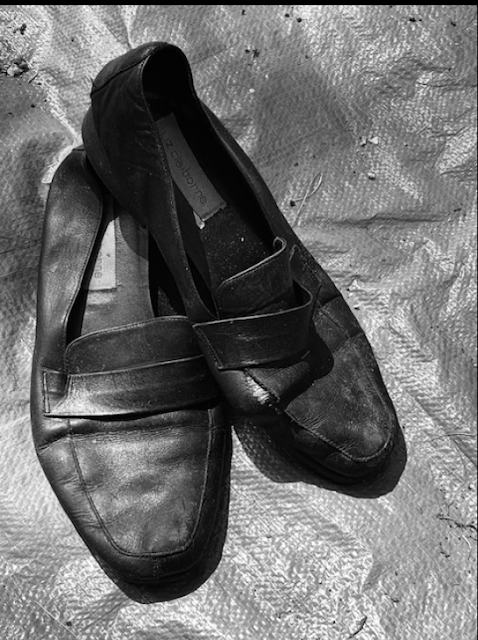 My Mother had many shoes

Over the past few months of looking through her closets… sorting… what to keep… what to throw away… it’s hard when each item reminds you of a time. “Oh, she wore that in that photo with Dad” “Here’s the dress she made for the Bicentennial.” “Oh gosh, this one was so 80’s”  ... So many pockets had tissues tucked inside, or a movie stub, or in one case... a nickel and two pennies…

Every thing is a time capsule. Every room a time machine. But one that let’s me only observe and not participate, like a movie overlay flickering…. transparently…over what remains… Actors walking in and out in spirit only, since they have exited the stage, in some cases...a long time ago.

Maw Maw is sitting on the couch, her throaty laugh. I hear it. Still.  She asks me  in my mind again, why I bought a red angel for the top of the Christmas tree? I  happily say “Well, Maw Maw,” maybe she’s a fallen angel." She liked that one. Or I’ve fallen asleep on the sofa again watching the late late movie and Daddy is waking me up and sending me to bed  as he heads off to deliver mail. Sometimes I'd sit with him first and he'd make this mash up of peanut butter, honey, butter and jelly and we would spread it on toast, in our kitchen that was always dimly lit, although I never realized it at the time...Or Mom is on the couch watching “Happy Days,” in the few hours she was home from work at her job at Sears, before going to sleep to wake up and do it all over again. She'd laugh and say "That's so silly"... but only when something silly happened.

I get lost in the moments. In the memories. And I pull myself back to the present.

For two weekends now I’ve had an “estate sale.”

I don’t even know what that means.

As far as I can tell, it’s the dismantling of a life accumulated. A life transferred on to things. Infused cumulatively with the essence of the person who owned them. As a whole they show you a picture of who that person was. And then people come. They look at the "things." You tell them the price is $20. and they offer you fifty cents. You say no.

Because to you, it’s not just a brooch. It was the one they wore when you went to see the “Jungle Book” when you were 5.  Remember when you had to come in from playing in the sandbox and she combed the tangles from your hair, and you cried so hard? But then you saw Baloo and  Mowgli for the first time, and you smiled, and you forgot the tears.

The Bear Necessities. The bare necessities...  So after they leave thinking you so unreasonable, you take the brooch from the box, and you put it into the ever growing pile of things you will not sell.

My Mother wore many shoes.

My Mother filled many shoes.

She always had to be older than her years, even as a child. She often took care of her two younger sisters. As a young adult she went to secretarial school to improve her future. She excelled at that. She got a job at East Texas Motor Freight where she met my Dad. They married. I see the picture of Mom and Dad in their wedding clothes in Maw Maw's front yard.  Happy. Unaware of what the future would bring. You want to say to them,  "Don't worry. SO much of it will be good. " The mid-calf blue satin dress she wore is still folded neatly in the closet. I wonder where the little high heel pumps are? But like so much they were absorbed by time...

After trying for so long, she finally had her first child, and then two more. She always wanted to be a mother.  I was the third, and her last attempt to have a daughter,.

If you were to ask her what her greatest accomplishment was, she’d always say “My kids.”

I hope I was what she hoped I would be?

She took a job at Sears, and worked her way up from secretary to Personnel Manager— a high position for a women in her day. And she had such delight in giving people their first jobs. In helping when she could.

A gentleman stopped by the sale yesterday. He asked “Are you Erma’s daughter.”  Yes, I said. "I worked with her at Sears. I was in automotive," he continued.  "We loved your Mom. We knew that if there was a problem to just go to her, and if there was a way to solve it, she would.”

I thanked him for his kind words.

I wonder if life was what she hoped it would be?

I never judge my Mother.  Her life was a result of her own unique recipe of circumstances. But I never was hungry. I always had clothes. I was given an education. I knew I was loved. I inherited a strong will— probably too strong to her chagrin. If she made mistakes, I don’t dwell on them... it's only fair...as she hardly ever dwelt on mine.... In fact I don’t think I could name her's as true mistakes. Yes, she was nosy, and opinionated, and tried to tell me what to do ALL the time. But I miss those things now...

She was the one they all came to when they needed a loan co-signed, a car bought, a problem addressed, money borrowed… sometimes folks would pay her back even. But she’d never ask. She was the one that would worry herself sick. Called at inopportune times. She was also the one who would get dressed, put on her shoes and come to you at any time of day or night.

She was my Mom.

So I watch… as people pick up a coffee cup here, a jacket there. And the whole becomes parts, and the picture starts to separate. Like a kaleidoscope turning.... It was one image. Now the picture breaks up. To become something entirely new.

Once when I was a teen I was selected to go on a trip called “Paint the West.”  Myself and other girls my age from all over the country went to Montana to paint landscapes and learn more about art. I drew alot in those days. My Mom was very supportive of course, and sent me off on this great adventure.

I don’t think she knew we’d be killing the rattlesnake under my tent and cooking it for dinner, but well, that’s our secret.

I remember that on the trip we visited a western museum and our assignment was to draw something we saw there.  It wasn’t a hard decision for me.  I gravitated towards  a pair of old cowboy boots. They were cracked and sun-baked, shriveled. creased, slumping to one side.

And I imagined that they were  perhaps just as they were when that cowboy took them off for the last time after -- The last ride--The last roundup--The last pony broken. After how many years? And so they sat, and they dried, and they remained.

Just as they were.

A whole history was there— in their  cracked visage if you looked hard enough. To me they were not just boots. They were that story. Of a man. His life. His hardships. An artifact as sure as a fossil I dug from the ground.

I suppose that’s why I picked this pair of my Mother’s shoes to show... The ones you see.

They are not the prettiest. Those she kept in a box and wrapped in tissue paper in case she wore them for some special occasion again. Maybe a wedding. Maybe a dinner if someone took her (but be warned that even if you did, she'd only order a bowl of soup because she didn't want you to spend the money). They were not the newest. They were not even the most expensive even when new.

But they were the shoes she wore the most.

Her joint on one side of a big toe jutted out and after awhile the leather started to stretch. The seam to burst. The sole is worn a little more in places she favored when she walked. The creases formed from constant use tell of the many hours she worked standing, walking, going to church.

They tell a story of a long life. Of a beautiful, hopeful girl, who grew up to be a wife, a  mother and an executive and tried to balance it all. They tell the story of a woman who worked hard, and loved strong, and who even after she retired, and her husband died, decided to go back to work as a salesperson at the very company she had once helped run... Because she was lonely, and it “kept her mind sharp.”

When my Grandmother, Maw Maw, was a teenager, she was thrown from a carriage and broke her back. She was told she’d never walk again. Instead, for a year, while her family worked on the farm, she would drag herself around the house and she taught herself to walk again. There was no  "can't" in her.

My Mother came from strong stock.

Those are my Mother’s shoes.

Today a lady came to our sale. My Mother’s sale. She walked slow. She’d pause from time to time and reach for something to steady herself. I asked if she needed a chair. She said “No, I’m okay. I just need to take it slow.  I'll get there.”

Among the newer things in the offing, a pair of silver shoes . The kind my Mom liked-- leather, comfortable-- most important to her in later years. I had bought her numerous pairs of these shoes and she’d worn them out! She loved them so much.

These  I had given her for what would be her last Christmas. She never got to wear them. Not even once.

“What size are these?” the lady  asked

After my father passed in 1993, I kept a few things. A red flannel shirt he always wore that still smelled like him, a handkerchief with his initials that he kept in his pocket, some items from the Post Office-- his hat... pair of black leather work shoes, he’d ordered but never got to wear, still in the box.  I had looked at those shoes that morning, but I could not find him there… and I was surprised.

“The silver shoes are so pretty,”  she said. “But. I’d be pampering myself too much.”

"And you should!" I replied.  But she never asked the price. Just looked, and touched the seam of a  loafer and held one up to the sun to watch it shine.

She picked out a few things, some dresses with a floral print, a red lacy top, and paid for them “That’s about what I can afford today,” she smiled.   I thanked her and she slowly walked away with measured, planted, steps.

And I realized  why I did not see my Father in his leather work shoes. The ones wrapped in a box. It's because of course, unlike the picture above, unlike the boots of the unknown cowpoke,  they had never walked with him. They never propelled him through this life. They were a blank piece of paper. An unopened book. A match never struck.

Mom would never walk in the silver shoes either. The ones that shined in the sun. She would never crease them or cause the seams to pop out or wear the edges of the sole on the side she favored.

I went after the lady and I gave her...