There are so many ways to have Joyclynn Lew on panels at your shows. Just read her amazing story below and image how she'd fit in and add her grace and wit to any podium. For booking information contact Pros & Cons Celebrity Booking at: evaink@aol.com 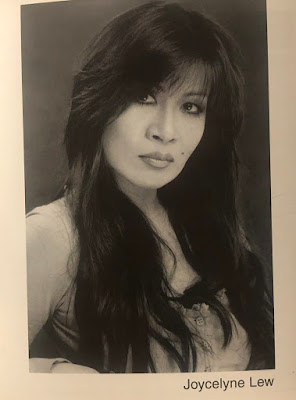 Joycelyne Lew It is not often that a convention gets to book someone for whom memorable roles in the all-time legendary film”The King and I” with Yul Brunner and the martial arts classic “The Big Brawl” with Jackie Chan are just two highlights if an extraordinary, diverse resume. But that’s what you’ll be getting with Joycelyne Lew. Under contract with 20th Century Fox at the age of 8, Joycelyne will be able to regal attendees with tales of Hollywood’s true Golden Age. There is her role as Princess Ying Yaawolak in the aforementioned “King”. She can also talk about being carried off into the sunset by Rock Hudson in “Battle Hymn of the Republic”; singing while Humphrey Bogart played the piano in “Left Hand of God”; her role as a reporter in “Wrong Is Right” with Sean Connery and starring with George Hamilton in “The Happy Hooker Goes To Washington”. Oh, and her first film was with a guy named Ronald Reagan. An inductee of the USA Hall of Fame, Joycelyne’s mist famous roles are arguably in martial arts projects. She played a bombshell in one of Jackie Chan’s biggest films, “The Big Brawl”. She also had the largest role ever written for a woman in the iconic “Kung Fu” series starring David Carradine. Additionally, she played a geisha in “Blade Runner”, a ninja fighter in “Big Trouble in Little China” and the mistress in “Samurai Cop 2”. She is a member of the television academy, further making her name in some if the biggest shows of the past few decades: classics like “Golden Girls”, “The Jeffersons”, “The Fall Guy” and “Married..With Children” as well as soaps like “Days of Our Lives”, “The Young and the Restless” and “General Hospital”. She currently spearheads an entertaining cooking show called “Cooking In With Joycelyne”, during which she makes inexpensive, nutritious dishes with guest celebrities. Speaking of guests, Joycelyne was a guest on mire than one occasion at the famed Playboy mansion – and to this day puts out a pinup calendar annually. Her sex appeal and penchant for comedy combine when she assumes the role of Mae East, a quirky version of Mae West in which Joycelyne writes her own jokes ” with an Asian slant”. A skilled voice actor and impressionist, she has pulled off everything from a convincing 50 year-old on Cartoon Network to baby voices in Japanese cartoons. As a hand model, she has poked the Pillsbury Doughboy. As a leg model, she doubled for Kim Basinger’s limbs on a huge billboard that was placed on the Sunset Strip. Having filmed 3 movies in the past year, Joycelyne shows no signs of slowing down.
Posted by Eva Ink Artist Group / Pros and Cons Celebrity Booking / HappySpacePOPCon.com at 5:34 PM