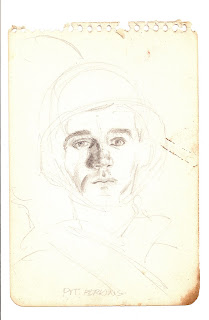 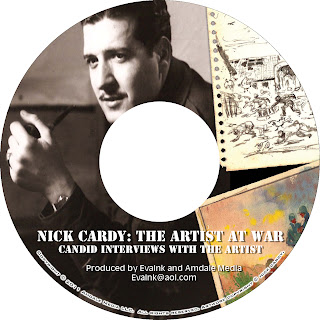 Writer, Tim Lasiuta recently reviewed the new Eva Ink Publishing book, "Nick Cardy: The Artist at War." Here is what he has to say. And if you are interested in reading more from Tim, here is his blog: http://timlasiuta.weebly.com/ --Renee

This is the case with “Nick Cardy: The Artist At War” by Nick Cardy and Renee Witterstaetter. Measuring in a 6 x 9” format, hardbound and profusely illustrated and annotated, “Artist At War”, is a compelling tour de War.

Nick Cardy, Nick Viscardi, to most comic readers, is closely associated with DC Comics Teen Titans, Bat Lash, Aquaman, and a host of other titles. His unique style immediately identified his work, and thusly, helped define the bronze age of DC as much as Joe Sinnott defined the Marvel age. This book is not about that.

“The Artist at War”, is truly that. An alternate title might be “Scenes From War”, but Renee and Nick have chosen well. Already a published, accomplished, working artist Nick was drafted and served in the 66th Division, later he served as an Assistant Tank Driver. Other than the horrors of war, Nicks’ constant companion was his sketch pad, pencil, and brush. Off and on duty, post and pre VE Day, the artist’s eye captured scenes to be put to paper, sometimes from memory. Even on the operating table, he was contemplating a picture! Now, that is an artist.

What you hold in your hands is a book that is like no other. This is real. The scenes represented on the pages, Nick saw, recorded, felt, and smelt. In his minds’ eye, he can probably tell you what happened after and who was around him. He can tell you the temperature, and hear the sounds. Photographs are that way. For Nick, and us readers as we absorb the text around the images, we too can be there.

I love the layout of the book, with pages centred, as opposed to filling the page. It is as if Nick himself is with you, showing pages on his black kitchen table, having a conversation. “Tim, take a look at my sketches. I drew this in…This was a tough day…The gunk on his head was the brains of the tank commander…”

As a bonus, a CD of candid interviews with Mr Cardy is included. If you are so lucky, Renee and Nick will sign theirs. The sketch edition would be the book of choice though.

Thank you Renee and Nick.