My Kingdom for a Teleporter!: Calgary Comics Expo and Wizard World Philly Start this Weekend! 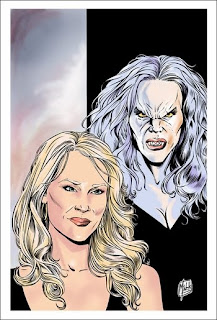 Coast to Coast! Golden, Scott and Jusko in Calgary AND Oosterveer in Philly!


Philly/Calgary-- Well, we don't expect you to go to both shows really, but you could! Yet... even if you decide to only hit one, this weekend is offering up two amazing shows: The Calgary Comics Expo and Wizard World Philly. And we've got great artists in both places!

The Calgary Comics Expo is welcoming back acclaimed artist Michael Golden for his second appearance at this fast growing convention. Michael is the co-creator of Rogue and many other characters. His stellar storytelling work can be seen in "G.I. Joe," "The 'Nam," "Doctor Strange," and much much more. He is currently working on several projects for IDW and DC Comics.

Michael will be joined by Batman artist Steve Scott, who will be making his first appearance at the show. Steve's four issue Batman story arch is on it's second issue-- to amazing reviews-- joining his credits of pencil work on such characters as X-Men, She-Hulk, Hulk, Razor, as well his production art on the television show "Smallville."

Each year, the fine folks that run the Calgary show publish a collectible book to commemorate the event, a portion going to charity. This year, Golden, Scott and Mark Texeira (who will attend the show next year), all have pieces in the hardcover volumne. Be sure to pick one up and bring it by their tables. As well as signing their book, you'll also receive a discount on some of their merchandise from Eva Ink Publishing.

For more information on the Calgary Comics Expo, go to: www.calgaryexpo.com

As for the East Coast, we certainly haven't forgotten you, as Wizard World Philly marks the first ever US appearance of artist Minck Oosterveer. Oosterveer is known for his work on "The Unknowns," "Zombie Tales," "Nicky Saxx," and currently on "Ruse" and a Spider-Man project for Marvel Comics.

Minck is also providing an exclusive Buffy print that is part of the Buffy VIP package for Wizard Philly. This limited print is also available at Minck's table in artist alley while supplies last. Talk to Constance at Minck's table for more information.


Basically, no matter which show you find yourself at, you just can't go wrong!


For more information on Wizard World Philadelphia go to: www.wizardworld.com

For more information on any of the featured artists, contact evaink@aol.com
Posted by Eva Ink Artist Group / Pros and Cons Celebrity Booking / HappySpacePOPCon.com at 11:30 PM