Bagels I Have Known and Loved (Spoiler: Not really about bagels at all!) 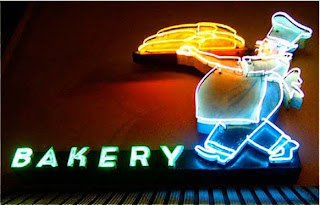 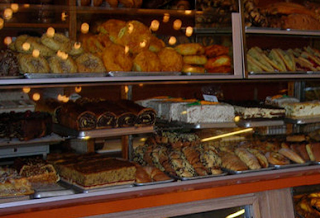 It's funny how things take on a certain patina in your mind.

For year's I've been extolling the virtues of Canter's bagels. You may have heard me lament when I've had to settle for Thomas's or some horrible dry, nameless variety, in my travels.

But then, it's no secret: A good bagel is really hard to find, ya know.

For many years, for me, the only REAL bagels came from Canter's on Fairfax in Los Angeles.

Yes, yes, I know all the New Yorker's out there are crying "sacrilege." "Burn her at the stake."

I'm unmoved. They say this every time.

I'm not being disparaging to H&H or Murray's or Ess-a-Bagel. Calm down.

But, hey, I lived in NYC for 15 years before moving to LA.

That's what I'd say.

I first became introduced to Canter's bagels when I moved to Los Angeles to work in film production full time in the 90's. I lived with my roommate, a wonderful guy named Jerry, on Genesse in Hollywood, near the intersection of Melrose (just down from the great old location of Golden Apple comics, by the way.)

It was a typical 2 bedroom LA bungalow. I could see the Hollywood sign from the front yard. On hot days, the shrubbery that embraced the old house, kept it cool, as if on ice, and shaded in a lazy, lovely way. I could never figure out where the breeze came from...Most of my fives years in LA, I'd leave the bungalow before the sun even came up, headed off to a commercial, a music video or a movie set. Whatever new job had fallen at the door... The 411 and a book of maps at my disposal.

Oh for a GPS back then!

I remember the house was a weird color-- some sort of avocado green. And the ancient beautiful Polish lady next door use to make a desert with pasta and raisins that smelled like heaven.

It was a good place.

Jerry was the first to take me to many places in LA to ensure my proper education now that I think of it-- The Formosa, the Hollywood Bowl, Barney's Beanery... and to Canter's for chopped liver and matzo ball soup.

Canter's is an LA institution, founded in 1931. And for my NYC nay saying friends, it has it's roots in Jersey City. After losing his deli in the 1929 stock market crash, Ben Canter moved to California with just $500, and opened his new deli.

I love a place with history.

Jerry, first became acquainted with Canter's when he managed bands, who would often play in the adjacent bar added in 1961.

The Kibitz Room, as it's called is still jammed with local bands every night. You'll even find Jeff Goldbloom there playing form time to time. Back in the 60's groups like The Doors and The Byrds along with Frank Zappa and Arthur Lee would meet at Canter's to exchange stories, food, and as the folks at Canter's joke "girlfriends." (Kibitz is the Yiddish world for wisecracking.)

Yup, Jerry had all sorts of tricks up his sleeve about the best places to go in LA, and I was certainly blessed to have him as my guide to old Hollywood. But then from the first time I met him, he had great advice. Thinking out of the box as it were.

It was on the set of "Rush Hour." I was visiting a friend in the movie, and Jerry was working with the crew. As I scoped out the craft service table for a snack, and picked up a bagel, Jerry came up and offered.

"Ya know, those are really great with cream cheese and salsa instead of jelly."

A light bulb went off in my head. Synapses fired.

"Really!" You don't have to tell me twice about a new way to use salsa. I tried it. It was good.

But it seemed especially good on Canter's bagels.

Later after moving to LA full time, making friends and connections, and working at numerous production companies in the area, nearby Canter's was always the place to stop to get food for production meetings and the like. And I admit that maybe sometimes I stirred the lunch choice in that direction for my own selfish ends.

Yup, I'd never walk out the door without snagging a bag of the egg/onion/poppyseed variety to take home as well. My favorite.

And, in truth, a part of my staple diet. And a great way to wake up before a 4 a.m. call. My habit developing, I'm sure, because I at the time, missed New York.

Ironically, after moving back to NYC in 2003 to become an artist agent and resume building my publishing company, I'd often think back to Canter's and long for my bagel fix. Funny how that happens.

Convinced utterly that these were the best bagels ever in the whole world.

I even entertained the idea of having friends in LA fed-ex me a box, just so I could put them in the freezer. "Oh... to have an egg/onion/poppyseed with cream cheese and salsa again...."

Finally, after a convention in San Jose just a few weeks ago, I decided to take a road trip down Highway 1, visit some friends in Ventura, then fly to my next gig in Phoenix.

There was something about the salty breeze and the way the light shines in California, that had me thinking about my old haunts again.

My friends found it a little funny that I insisted on driving out of the way from our lunch in Van Nuys, all the way to Hollywood!! Believe me, it's not that far, but getting anywhere in LA by car is always an adventure.

My purchase: Five egg/onion/poppyseed, and two pieces of marzipan. (These I always had with a glass of wine after a long day on a movie set. Just one piece. All good things in moderation.)

And now the rub.

I hate saying this. It's like the time I took my two nieces, Rachel and Amanda, to see the Statue of Liberty for the first time when they were younger, and their response was "It's not as big as I thought it would be."

But they weren't. They just weren't as good. Something had changed...

I tried... I took them to my Phoenix appearance, had them for breakfast each morning. I brought them back to NYC, thinking if I toasted them in my own toaster it might do the trick. But.... no....

For one thing: They WERE smaller. Granted the Statue of Liberty has never shrunk. (Sorry Rachel and Amanda.) But my Canter's bagels sure have! I use to cut them in threes. I could barely cut these in twos. Secondly, the taste just wasn't the same. Even the marzipan seemed gritty? Or different. Or something! Darn it!

A new recipe for my old faves? I don't know.

But, as the days went by and I gave it some thought, I realized something.

Maybe the bagels hadn't changed all that much. Maybe I had.

I think back to the mornings in that little Avocado green stucco bungalow in Hollywood, the sun filtering through the windows, shadows from a palm cutting the floor, and myself sitting on that baby blue sofa in a completely quiet room, doing my morning ritual of drinking coffee and eating my bagel/salsa concoction. Thinking about the day and what was ahead.

(Mornings are always that for me. Time to be in my own head...no talking... I love the serenity for that time when the world is coming into view.)

I think about the weekends on my boat in Marina Del Rey-- the vintage one that I was always fixing up. And having a little brunch of bagels and scrambled eggs and mimosas out on the deck. A fish hook in the water. Sea gulls overhead.

(After I sold it, I hear the boat sank. I've always missed that wonderful Fairliner...wooden hull, but when I had her, as leak proof as steel. Oh, but she was grand!)

And later, when I moved outside LA to the desert, and the landscape would slowly reveal each morning like a blanket being slipped away, I had the same breakfast...always...although timing getting to Canter's was a bit more difficult. But I did, the giant kitchen in LA as the scene of prep, replaced by a little country job overlooking brushy foliage, the quiet times punctuated with the roar of lions, bellowing from the animal preserve near by, like a symphony of feline virtuosos. This one baritone. This one the tenor.

(They are so vocal in the morning, lions are. As if to say, "Hey, here I am. Where are you?" And honestly, one of the most beautiful, mournful, yet optimistic sounds I have ever heard, or was privileged to have as my morning wake-up call.)

The floury boiled discs of dough were just a prop or a character, that happened to be in the same scenes as I. I loved them by association, and the senses they brought to my mind.

That explains why, in some strange way, when I ate them now, they made me feel just a little... I don't know... melancholy.

But then, there really is no reason to be, is there?

Life is such a lovely thing... One adventure leads to the next...seeing what each day will bring. The surprise. Making new things happen.

But... you do miss people that are gone.... Your old homes like a living thing are always evolving and welcoming new energy to live within it's walls...someone else puts their shoes where yours once were, their clothes on the old rod... Animals come into our lives with unconditional love, and often leave us too soon...

Time continues to propel us forward...

Nothing much one can do about that.

Today, when I toasted the last bagel from my Canter's jaunt, albeit smaller. ( I KNOW it is!) I ate it slowly, with care, not dwelling on what I perceived as it's shortcomings or imperfections, and I gave a coffee toast to those lovely templates of place it helped me so vividly recall.

Now I know, it wasn't the bagels that I missed so much. Maybe they were never that special.

It was the time. That's all.