"Joe Jusko: Maelstrom" in Stores Now, And Why I Think You'll Like It! 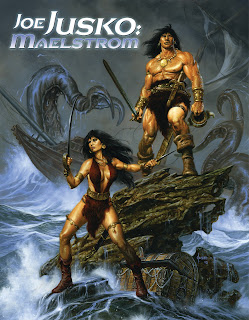 The newest book from Eva Ink Publishing is hitting stores even as I type. If you haven't ordered your copy yet, you still can. Just ask your local store owner. Or, you can order a copy from us at www.evainkartistgroup.com as well.

This is a hardcover, full color book, featuring some wonderful paintings and sketches by Joe that haven't seen print in any other book. "Joe Jusko: Maelstrom," follows our successful sketchbook from two years ago, "Joe Jusko: Savage Beauty."   You can own them both without any duplication of art. An assurance that we like to give you here at Eva Ink Publishing. 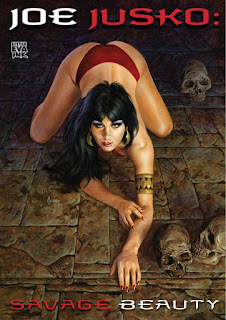 For your ordering info, here are the ISBN numbers for "Joe Jusko: Maelstrom":

So that's the biz info for ya.

Why do I think this would be a great book to own? Well, if you know Joe's work already, then you are someone I don't really have to tell. If you don't know Joe's work, I think you'll truly enjoy seeing it if you like pop culture, fantasy, superhero and adventure art, done with a fine art bent.

But perhaps I can say it best with the actual intro from the book, which appears below. 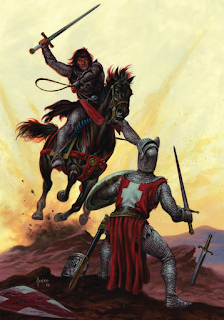 One of the things I treasure the most about having worked in comics as my career is that I’ve had the opportunity to work with amazing people.

My life has indelibly been enriched by the likes of Mark Gruenwald, Jim Salicrup, Craig Anderson-- talented editors and mentors all. And of course, by the artists that I’ve met, hired, and created comics with, along the way.

I love good storytelling-- ranging from Alex Toth , to Will Eisner, to Nick Cardy, to Michael Golden. It’s what attracted me to this medium to begin with… my feeling that a comic, when done well, is like a movie on paper. And as the editor I get to be the director of putting my “film” crew together. Simply put.... it IS fun.

Artistically, I have always been drawn to a myriad of styles: Arthur Rackham, Maxfield Parrish, Norman Rockwell, and the incomparable Frank Frazetta, among them. I do so love the painters… it was such a thrill--when I was starting out as green as moss on a tree-- to work with, and get to know, folks that awed me-- artists like Earl Norem, Jim Silke, Mark Texeira, Mike Kaluta, Dave Stevens… and of course, Joe Jusko.

Sometimes my involvement was small: You may not know it, but those lips on Joe’s She-Hulk Muscle Beach poster. Those are mine. Yup. Red lipstick planted on a napkin, and superimposed. (Not to brag too much though. Of everyone that tried out in the office, the runner up was a GUY! Glenn Herdling. But just the same…I still say it was coup.)

One of the great things about now being an artist agent (since 2003) and publisher (since 1997), is that it has allowed me to book some of these people I really like into conventions, gallery shows, and signing tours. At this point, we at Eva Ink Artist Group, have many a tour and convention under our belts, domestically and abroad. With more planned for the future. Joe is one of the first people I ask. And when his schedule allows him to accept, I’m always happy to know when he will be along for the ride. It adds a bit of Joy. Although, sometimes it also means less sleep. (He is a force of nature. Yup, I have a lot of Joe Jusko stories at this point. And I remember them each fondly.)

I vividly remember being in Paris with Jusko and Michael Golden a few years ago. And our friend Dynamo convinced Joe and I to go out on the town in the City of Lights. “All the places close at 2 a.m. afterall,” he implored.

Hours later, trading stories with Joe and our Parisian friends, during a magical evening of trading stories, where hours seemed to have been lost in some time machine, we were dismayed to see the sun coming up outside the cut glass windows of the Art Nouveau bar near Gare du Nord. It was 6 o’ clock in the morning!

“What? We thought you said all the bars close at 2?” “They do!” Exclaimed Dynamo. “All of them except THIS one.” Joe and I dashed to the hotel, grabbed our bags, and piled into a car waiting to drive us to The Netherlands that day, as Golden sauntered out all bright and bushy tailed from a good night’s sleep. Never a dull moment.

It was on that same trip, as I recall, that we dubbed Joe as “The Cat Whisperer.”

Joe loves all cats, and all cats--at least most of them-- love him in return. He demonstrated this uncanny reality by befriending a stray feline near Sacre Coeur, when within seconds the cat went form hiding under a shrub to following Joe, purring. (I still think he had a can of tuna hidden behind his back. But C’est la via.)

This made it all the more merry a year later in Aviles, Spain, walking home from the convention tent in the quiet of the night, the lights from the Town Hall illuminating the ancient cobblestone square, reflecting in a warm honey hue, that makes you want to linger a bit longer...

Across the square, Joe sees a feral feline, and starts to walk towards it.

I wish I could explain to you… OH...the blood curdling scream that emanated from that cat, echoing off all the buildings, and probably waking even the ghosts therein, as it bolted across that formerly peaceful square like it had seen a Doberman…and how the laughter from all of us--including Joe-- added to the calliope.

I could go on. But it would involve chicken fights, rolling M&M’s, Meerkats, leaning sisters, eggs in coffee pots, waitresses, …and...and... I just don’t have the space.

You notice I’ve not mentioned much about his art. Just a technicality. I really don’t have to.

It’s undeniable that Joe Jusko is a master painter. That’s why I wanted to not only publish this book “Joe Jusko: Maelstrom,” but also our previous tome “Joe Jusko: Savage Beauty.” His talent is evident. A gift that will last long after my memory fades.

What one doesn’t always get a chance to see, however, is the essence of a human being. Who they are--The spontaneous laughter, the intelligence behind even the jokes, the honesty, and a loyalty one finds in only true friends.

But I think that essence of who Joe is… comes through in his artwork in a most substantial way. It’s there. It’s what compels you to keep looking for more and more of his pieces. I’m happy to provide yet a new opportunity with this very book: A perfect storm. A Maelstrom. This combination of intent and execution.

So, without further waxing on my part, here is “Joe Jusko: Maelstrom,” serving as a peek inside the energy, the humor and the sheer power of an amazing craftsman:
My friend, Joe.