19 Superheroes and Their "WTH" Superpowers!


I had to laugh at this one True Believers. The Huffington Post seems to have taken an interest in our crazy world of super heroes (could it possibly be because of the opening of the Avengers movie... Naw.... oh WAIT, they admit that's why!) and done their research to find some of our...uh...stellar cast of characters with some rather unusual super powers.

Well, yeah, to us they make perfect sense. We're use to them. But to the outside world, Matter Eater Lad seems strange. Go figure.

Anyway, here, by way of The Huff, are their top 19 choices for "What The Heck" super-powers (and yes, they used another word, but I'm gentile. LOL).

With "The Avengers" hitting theaters this weekend, superheroes are on everyone's mind. But not all superheroes are as cool as Iron Man, Thor, The Hulk, and Captain America. In fact, some superheroes are just plain bizarre. Sure, most comic book heroes have the abilities of flight and super strength, but how many can vomit acid? Or communicate with squirrels? Or make their own arms fall off?
Well, the 19 heroes below can do all that and more. Some of these characters you just have to see to believe. We don't expect an "Avengers"-type movie with this cast of characters, but we can at least appreciate them for the utterly absurd realities they have created within the comic book universe. 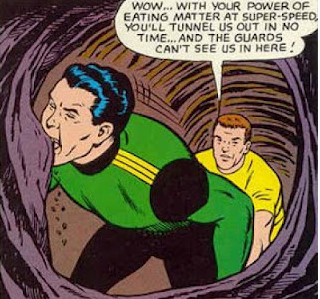 Matter-Eater Lad is from the planet Bismoll, where poisonous microbes made all food inedible, forcing the planet's inhabitants to evolve to have the ability to eat any form of matter. Man-Eater Lad can also eat at super-speeds and consume matter otherwise thought to be indestructible, meaning that theoretically, he could eat Superman. 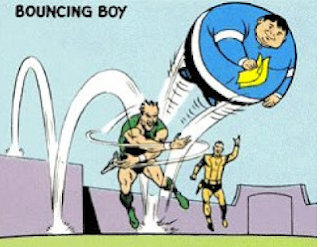 Bouncing Boy made his comic book debut in 1961 after young Chuck Taine accidentally drank an experimental super-plastic formula he mistook for soda pop. He then gained the ability to inflate his body like a ball and bounce around without injury. 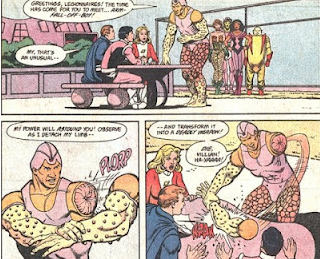 Arm-Fall-Off Boy's power stems from his ability to -- you guessed it -- detach his limbs and use them to beat evil-doers. Sadly, he was denied entry into the Legion Of Super-Heroes, despite the group inducting the likes of Matter-Eater Lad and Bouncing Boy. By all accounts, Arm-Fall-Off Boy was intended to be a joke character, and he very much was.  (Renee's note: Does he really count then? Hum. :-/) 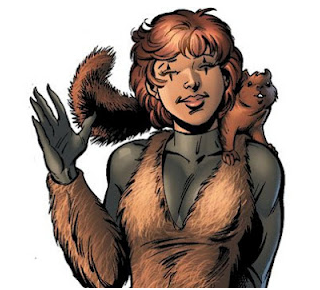 Squirrel Girl: This crime-fighting high schooler can communicate with squirrels, but also has super strength, super speed and a retractable knuckle spike. She consumes macadamia nuts for extra strength and even has a squirrel sidekick. Squirrel Girl's crowning achievement is her defeat of the infamous Doctor Doom after she, umm, overwhelmed him with squirrels. (Renee's Note: I'm surprised my friend Constance doesn't ask for sketches of this one, being the lover of all things squirrel that she is.)

Jazz appears to be a very special case in the X-Men universe due to the fact that his genetic mutation is not a power, but rather a change to his physical appearance resulting in his skin turning blue. He has no other discernable powers or abilities. However, he is an aspiring rapper.  (Renee's note: Eh... I have REALLY never heard of this guy.) 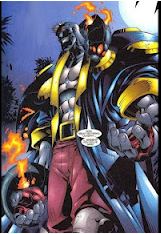 Maggott's superpowers derive from his abnormal digestive system, which consists of two mutant, sentient slugs named Eany and Meany who live inside his body. The slugs are able to leave his body, quickly digest and absorb the power of any object, and then return and transmit the energy back to Maggott. In doing so, the slugs give Maggott superhuman strength, speed and stamina. For the slugs to exit and enter Maggott's digestive system, they need to eat through his skin. Yum! (Renee's Note: If I could get him to go fishing with me, at least I wouldn't have to bring the worms.) 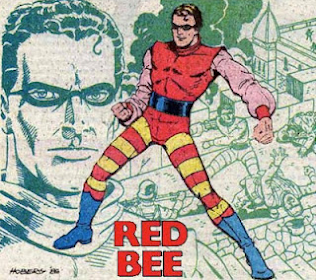 Red Bee: When Rick Raleigh isn't working as the assistant to Superior City's District Attorney, he's fighting crime under the guise of Red Bee. Red Bee has a swarm of trained bees stored in his belt to unleash on criminals at the ready. It is unknown how he trained the bees or how he is able to keep them in his belt (don't ask too many questions) but Red Bee is not to be confused with Yellowjacket,  who can also control bees. 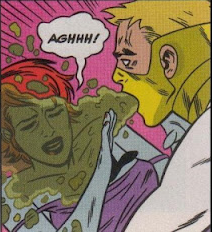 Zeitgeist: Alex Cluney has a very distinctive mutant power which enables him to spew acidic vomit from his mouth. Tragically, he discovered his power while making out with a girl; he vomited acid all over her and burned her face (thankfully she survived). His vomit is highly acidic, able to burn through 10-centimeter-thick steel in less than 30 seconds. Hopefully he also carries mints. 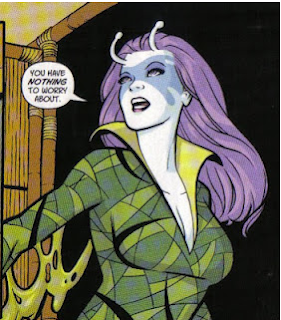 Infectious Lass: Drura Sehpt hails from the planet Somahtur, whose inhabitants can easily infect others with various diseases while they themselves remain immune to its effects. After travelling to Earth, Drura became Infectious Lass and began fighting crime, although her powers sometimes do as much harm as they do good, especially when she accidentally infects other heroes with illnesses. Oops! 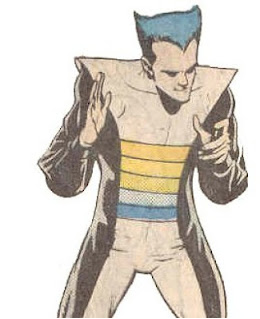 Color Kid: Ulu Vakk was just a normal guy until a beam of multi-colored light from another dimension struck him, thereby giving him the superpower to change to the color of anything he wants. (Renee's Note: You got me. :-/) 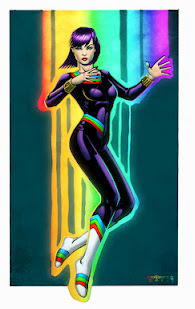 Rainbow Girl: Dori Aandraison, also known as Rainbow Girl, can wield the mysterious power of the Emotional Spectrum, meaning that she has the ability to give herself unpredictable mood swings (ladies, amiright?!). Having always wanted to become an actress, she aspired to join the Legion Of Super Heroes in order to gain notoriety, but instead had to settle for the Legion Of Substitute Heroes. (Renee's Note: Ahh... always the understudy.) 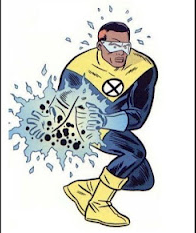 Anarchist, one of the founding members of the X-Statix mutant superhero group, has the ability to secrete acidic sweat. His sweat allows him to project acidic blasts of energy. He and Zeitgeist should probably talk. 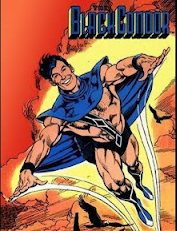 Black Condor: In the 1940s, infant Richard Grey Jr. was with his parents on a scientific expedition in Mongolia when their caravan was attacked. Richard was the only survivor and was adopted by a group of hyper-intelligent condors who raised him and somehow taught him to fly (we don't want to know). Eventually, he would move to America and adopt the guise of Black Condor, the name he adopt the guise of Black Condor, the name he would use to fight corrupt politicians and racketeers. (The Black Condor was later reintroduced as a new character several times by DC Comics, who revised his backstory and changed the origin of his powers.) 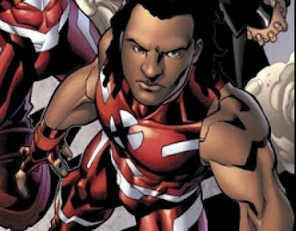 Tag: Brian Cruz's genetic mutation allows him to force people to uncontrollably run away from whatever object or person he chooses, hence the alias "Tag." He uses a psionic signal which forces anyone within a radius of approximately 100 feet to either run away from or run directly at a target source. When applying his power, he always yells, "You're it!". Clever. 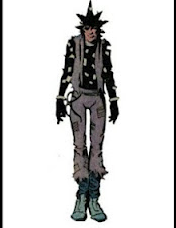 Tar Baby's genetic mutation grants him the ability to secrete an adhesive, tar-like substance, allowing him to stick to whatever objects he chooses. Sadly, Tar Baby was captured by the Weapon X program (known for performing experiments on mutants) and put to death in a mutant concentration camp.  (Renee's Note: This one probably wouldn't have freaked me out so much, except with that name, you really expect a female, no? I guess they were playing against type-casting.) 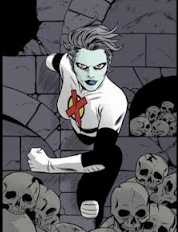 Dead Girl's mutant powers were activated by her death (shocker) which allowed her to continuously reanimate her corpse and come back to life, essentially making her immortal. Additionally, she can communicate with other dead beings, survive without any food, water or oxygen, and control severed parts of her body. And guys, she's single.

Stone Boy: Dag Wentim is a native of the planet Zwen, where people developed the ability to turn themselves into stone for long periods of hibernation. Originally, he was unable to move in his stone form and was only able to transform into an immovable, nearly indestructible statue of himself, which was not very useful in battle (his teammates would sometimes drop him on villains). However, he eventually gained the ability to move while in his stone state.

Brother Power The Geek was originally just a mannequin in a tailor's shop. One day the mannequin was struck by lightening, which somehow not only brought it to life, but also gave it super powers. He may not look very formidable, but he has super strength and is nearly indestructible, though he is portrayed as a pacifist. (The original comic book debuted in 1968 and only lasted two issues before being canceled.) (Renee's Note: I admit it. When I first started working at DC Comic's as an assistant editor-- my first job in comics-- I discovered this character in the archieves and got a big kick out of him. I kept asking to do a trade paperback on him. There were no takers at the time. LOL, but I'm pretty sure he's been embraced by the powers that be since then with some sort of tome. Peace man!)

El Guapo: Robbie Rodriguez, another member of the X-Statix mutant group, has no discernable powers aside from a telepathic connection to a flying, seemingly sentient skateboard. He can control the skateboard with his mind, though the skateboard can also act through his subconscious thoughts. Sadly, after the skateboard falls under a curse, it flies out of control and impales El Guapo through the heart, killing him. Ironic, isn't it?

And that's their 19 picks at Huffington Post, ya'll. Apologies to any of my friends that may have created these characters. I didn't pick 'em... and...I don't know... In the course of working in comics, I know I've come across 19 superheroes with powers just as strange if not stranger than these.  I'll think on it. In the meantime, feel free to tell me your your top 10 would be!