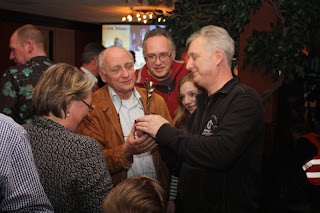 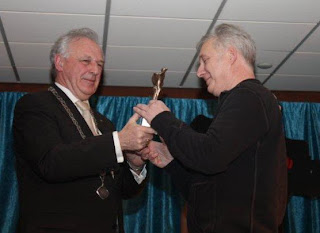 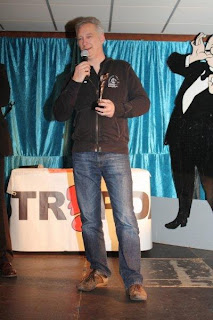 The "Stripschapprijs (Stripschap-award) is the oldest and most important comic -award in the Netherlands, and Eva Ink Artist Group is pleased to announced that extraordinary illustrator , Minck Oosterveer--currently working on "Ruse" and Spider-man for Marvel Comics-- is this year's recipient of this important honor.

Award-winning artist, Minck Oosterveer is just as known outside of The Netherlands, for a plethora of comic strips, movie work, and sequential art. Most notably here in the United States for such books as "Zombie Tales" and "The Unknown" with writer Mark Waid!

Although he grew up in The Netherlands (Holland) with European comics, Minck was soon interested in, and influenced by, American comics, especially the newspaper comics of the 1930s-50s. It was the pulp-ish, direct style and the usage of black and white in realistic artwork that attracted him the most. Film Noir as it were. Oosterveer says his work is strongly influenced by Milton Caniff, Alex Raymond, and Will Eisner.

Major collaborations occurred for Oosterveer with Willem Ritstier resulting in the series "Claudia Brücken" for the Franco-Belgian publishing-house 'les editons Lombard' and Tintin-Magazine . As well as the daily newspaper comic in an American style, "Jack Pott", published in the Dutch newspaper "Algemeen Dagblad."

Since 1996 Oosterveer has worked again with Willem Ritstier on the newspaper comic "Zodiak" for De Telegraaf, and series "Rick Rolluik" for Suske en Wiske-magazine, and "Arachna" for ComicWatch-magazine. He did the art and story for the comic "Excalibur", published by Enigma and artwork for a successful animated movie, '"Mario A".

In 2002, Oosterveer and Ritstier started a new daily comic strip in De Telegraaf, called "Nicky Saxx", one of their most successful comic-series. This was followed by a comic-series entitled "Trunk" (2006), which debuted to critical acclaim. Next they teamed up (2007) as writer (Ritstier) and penciller (Oosterveer) for "Storm", a successful European comic series created by Englishman Don Lawrence, and started a new western-comic, called "Ronson inc." for the legendary Dutch comic-magazine "Eppo"

Minck Oosterveer debuted in US-comics with the aforementioned "Zombie Tales/ Zaambi" written by Cris Morgan and published by BOOM!-studios. Early 2009 until 2010 he collaborated with American writer Mark Waid to draw the mini-series "The Unknown" and "The Unknown: The Devil made flesh" which where published by BOOM!-studios as well. As mentioned, he is currently back in the US, working at Marvel Comics on several wonderful projects, with more to come.

"When they told me I would be awarded the Stripschapprijs this year the first thing in my mind was: Darn... I have to do a speech... than I realized there where a lot of people and colleagues who had recommended me for the award and I felt honored they had given me a place amidst the artists I had admired and considered to be my examples and my heroes," stated Oosterveer.

Currently, Minck Oosterveer is scheduled for several European and US shows in 2011, with more to follow.


For more information on Minck, his commissions, and appearances contact Renee at evaink@aol.com

(Above: Minck Oosterveer with his wife, father, brother and daughter at the event; Oosterveer receives award from Mayor; Minck Oosterveer discussing the importance of this award.)
Posted by Eva Ink Artist Group / Pros and Cons Celebrity Booking / HappySpacePOPCon.com at 9:43 PM