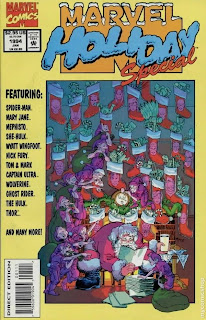 As an editor at Marvel Comics, one of my favorite things I loved to do was write my column, "Witterstaetter's Witticisms," in which, I wrote about... well... just about anything that was on my mind, or touched me in some way. These columns appeared in any book I edited, including the "Marvel Holiday Special," the "Impossible Man Summer Special," you name it!

And, to me the shinning star on top, the cover by my friend Mike Kaluta.

In these books, I was fortunate enough to work with some great talents on short stories that captured the spirit of the holidays and times with family, regardless of ones religious affiliation.

I'm so proud to have been able to start this book at Marvel, and here, without further fanfare, is my column from 1993, which happened to mark a turning point in my own life...and although I may write it differently today with perhaps more finesse and polish, I wouldn't change a thing.

So, here, a little time capsule piece for you...

Last year, a tradition ended. It was a small thing in some ways, but a thing that takes up considerable space in my attic of memories that helped put together the jigsaw puzzle of who I am. The Sears Christmas Catalogue published its last edition.

"What?" you might say, "It's not like the Saturday Evening Post or "The New Yorker" ceased to be. It's not like the Library of Congress burned down." But when I heard the news, it tugged at my heart nonetheless and I began to relive my past holidays with the Sears Christmas Catalogue.

It seems like it was always there just like Mom and Dad and Christmas trees. How can I describe the joy I felt as a child every years when my parents gave me a copy of that book, chock-full of every describable toy--Barbies, Barbie clothes, Barbie airplanes, Barbie buses, painting sets that promised to teach you to draw, chemist sets that let you create your own mini explosions and make plastic jewelry, bikes and plastic dinosaurs and Easy-Bake Ovens. AH!

And boy, did I! I perused every page like a top -notch proof-reader, extolling the virtues of one set of Barbie outfits over and against another. I made charts and graphs, putting down weights, measurements and prices per item. As I tried to figure out just what Santa could afford to buy and if there would be money left over of my brothers.

Of course, any endeavor like this didn't take one day! It took months-- from the first day the catalogue came out to three weeks before Christmas. I had no ideas why Santa needed this deadline, but he did, so that was that! Then, I handed my crumpled, crossed-out, re-written requests to that Santa messenger named Mom, and hoped for the best.

I'd pretty much try to forget about Christmas then, only casually flipping through the dog-eared catalog to review my choices--that is, until Christmas morning when my two brothers and I would rush to the tree, tripping over our pajamas, and stopping short of knocking the whole thing down, to look at our new found booty stacked in our individual sections. A bike here, A Spider-Man bank there, a G.I. Joe camping set there. We'd shout a hoot with delight and immediately begin to play.

All the while, Mom and Dad watched, seemingly tired for such an exciting event Almost like they'd been up all night putting bikes together or something! Go Figure! But Dad would still smile that sweet, understanding smile, make some joke, as I brought each treasure over to show him and explain it's virtues. That's an important part of the memory.

It's funny about that Christmas catalogue. Years passed, and no matter where I went-- college, Dallas, New York--it always found me. Arriving just in time for me to make my list. Oh, I never got everything on my list of course, and I tried to get more conservative with my requests as I got older, realizing that Santa might not have as much money as he used to with kids in college, etc. but the fun was in the doing The fun was having the tradition.

So, I sighed a little sigh for the loss of my previous book of dreams this last Christmas. Maybe, because for me it's also the symbol of a greater loss-- a Christmas that will be the "last" for many reasons.

You see, my Father had a massive heart attack last November, followed by open heart surgery. We all thought he was going to be be fine. He made it home for Christmas sitting in his chair on Christmas morning wearing his red flannel shirt, smiling that same mischievous smile from years ago (though a little weaker) with the sparkle in his eye (though a little duller_. And I showed him each one of the gifts from Santa as if he hadn't seen them before. And he'd say "Gee, you sure racked up! What a haul!" and I'd agree.

Even at 29, I was still Daddy's little girl.

Then, on January 5th, my mother's birthday, my Father passed from this world. As Alexander Woollcott once said, one of the hardships of being on this world past a certain age is watching one's individual world become depopulated.

Yet some things are constant. Memories from my childhood, like drinking hot chocolate on a winter's day, will keep me warm from the inside out The Catalogues will come and go. Toy's will be played with and broken. Comics will be read and re-read, saved or thrown away. But maybe memories live forever.
Posted by Eva Ink Artist Group / Pros and Cons Celebrity Booking / HappySpacePOPCon.com at 7:16 PM