"Spider-Man:The Musical," Hung UP, but NOT Hung OUT to dry! 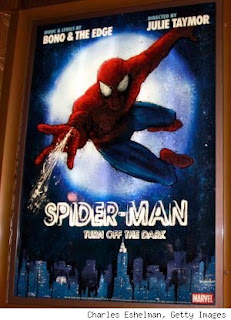 "Spider-Man: The Musical" went into previews last night. Apparently one of the performers has hung out on a wire for 6 minutes while the performance stopped. That would certainly disrupt someones enjoyment of the show, but never the less, I am very curious about the production and plan to go see it. Glitches and all. But, hey that's what previews are for-- to iron out the glitches.

I think "Lion King" is still one of the most amazing things on Broadway, or anywhere (if you haven't seen it, GO), and everyone thought is was going to be a stinkaroo! Boy were they wrong! It's one of the longest living shows in town now. So I have alot of faith in the inventiveness of Taymor. And of course the Elton John music was fitting and superb. As for Spidey.... I'm not a huge Bono fan or The Edge, who provide the music, but I'll give it a chance.

At any rate, I'm happy to see something opening on Broadway that isn't some silly juke box musical that charges $85 or more per ticket and doesn't deliver even on the level of a high school musical (Rock of Ages, I mean you, sucka).

And with the wire work and areal fights, it seems something akin to Cirque du Soleil as well! That would be fantastic!

So, I applaud the new Spider-Man musical, and I'll certainly review it when it hits. Never say never. It "could" be our next Lion King, and if so, I'll be in line more than once.

Launching the biggest show in the history of Broadway can't be easy – especially at a time when the Great White Way has been having a particularly rough go of things. But after years of delays and financial troubles, the makers of 'Spider-Man: Turn Off the Dark' are forging ahead with the mega-musical, whether it's ready or not.

Directed by the visionary behind the Broadway reimagining of 'The Lion King' and with a full-length score by two of music's most iconic figures, Bono and the Edge from U2, 'Spider-Man' is as big a risk as has ever been undertaken in theater, and the stakes are high, according to '60 Minutes': "The danger and risk with 'Spider-Man' the musical is that to stay afloat, to keep running, it has to be as big a hit as Broadway has ever seen."

Despite being pushed back repeatedly over the last several weeks – the show's first planned preview was set for Nov. 14, after having already been delayed from January and February of this year by longstanding production issues – and following word from sources close to the production that it was far from finished, the first preview performance of 'Spider-Man: Turn Off the Dark' went ahead on Nov. 28, but it was far from the flawless spectacle Bono, the Edge and director Julie Taymor likely wanted. Instead, the production had to be stopped five different times to fix technical problems, causing its running time to bloat to just under four hours.

For her part, Taymor has long said that troubles like these come with the territory of mounting such a large and elaborate show. Asked by '60 Minutes' correspondent Leslie Stahl if she was nervous, Taymor – who also directed 'Frida,' the Beatles musical 'Across the Universe' and the forthcoming Shakespearean adaptation 'The Tempest' – said, "If you don't have fear, then you're not taking a chance."


Taymor, Bono and the Edge have been taking chances on 'Spider-Man' for years. Bono and the Edge began working on music for the show not long after the release of director Sam Raimi's 2002 big screen adaptation of the comic, and script readings for the Broadway production reportedly began as early as 2007. But staging the show they wanted turned out to be far more complicated – and expensive – than the creative team thought it would be.

To deliver the show financers and producers expected, Taymor dialed everything up a notch and no expense was spared. Known for her vivid and intense visual style, Taymor filmed sequences for giant LED screens that were built into the already-elaborate set of mechanized skyscrapers, and highly-controlled, if still dangerous, high wire aerial acrobatics became integral parts of the production. (Two acrobats were injured during rehearsals, one of whom broke both of his wrists.)

Before Sunday night's preview performance, producer Michael Cohl told the audience, "I'm hellishly excited, and I can't believe we're actually here and it's actually going to happen." He also asked the audience for patience should the performance be forced to stop as the crew worked through technical problems, and with one notable exception, Cohl got what he asked for. During the second act, when the show was again stopped for a technical problem, one woman exclaimed, "I don't know how everyone else feels, but I feel like a guinea pig today – I feel like it's a dress rehearsal." The unhappy woman, not the production, was booed by the otherwise understanding audience.

The New York Times notes that most of the flying sequences "went off without a hitch" and delighted the children in the audience. However, when the aerial stunts failed, it revealed just how reliant on technical perfection this iteration of 'Spider-Man' truly is, as the show was forced to grind to a complete halt each time it had to contend with a high-wire problem.

The worst of these came at the end of the first act, when Spider-Man was suspended motionless several yards above the audience for several minutes, forcing the act to end prematurely. Unlike film, there are no second takes in live theater.

Being suspended in mid-air with nowhere to go is a feeling the show itself is pretty familiar with. It was nearly shuttered in 2009 before Cohl, a longtime concert promoter and producer who has worked previously with U2, signed on and managed to raise the additional $30 million needed to save the show.

After all is said and done, 'Spider-Man: Turn Off the Dark' will have cost $65 million to bring to the stage. It's the most expensive Broadway show ever, with a budget of more than double the former record-holder, 'Shrek: The Musical.' This 'Spider-Man' also comes with an additional $1 million in weekly operating costs.

Like the singing acrobats who fly through the air in the Foxwoods Theater, 'Spider-Man: Turn Off the Dark' has a history of defying the odds. But it still has to contend with its biggest foe yet: the recession. With the economy still hurting and unemployment high, will the show be able to fill enough seats to recoup its massive cost? The delays have already pushed the show's official opening to Jan. 11, a traditionally weak time for ticket sales and a few weeks too late to take advantage of the onslaught of tourists who visit New York City at Christmastime.
Posted by Eva Ink Artist Group / Pros and Cons Celebrity Booking / HappySpacePOPCon.com at 8:09 AM