New Article about the Mosley Gallery show. I like it that they focus on the Exosquad piece. I was the editor on the series and hired Golden to do the covers. --R. 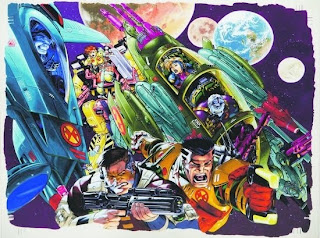 
The exhibition of Michael Golden's comic book art, on view through Dec. 2 at the Mosely Gallery, University of Maryland Eastern Shore, raises important questions about audience, gender and the relationship of images to texts.

Specifically, these images were created as integral parts of stories in comic books or graphic novels, whose readers are primarily male. As such, can they hold the attention of female viewers or viewers who have little knowledge or interest in what Golden has termed "science-fiction/fantasy-adventure"?

Somewhat to my surprise, the answer is "yes." I was struck by the extraordinary skill and expressiveness of these images, despite the fact that I know very little about the characters or narratives depicted in them.

The exhibition has about 40 works, primarily original drawings in black and white for pages and covers of comic books and graphic novels. A few paintings for comic book covers or yearbooks are also on display.

Two works for the cover of "ExoSquad #1" show Golden's working process. One is a brush and ink drawing and the other, a 'blue line' painting. To make the drawing, Golden initially "penciled" or drew the scene. He then laid a sheet of clear acetate over the pencil drawing, tracing its outlines and linear details onto the acetate in black ink with a brush. After that, he "colored" or painted the pencil drawing. He then laid a copy of the acetate line drawing, now in blue, over the painted drawing, creating a composite image. The final image, fusing line with color, thus exists only as a composite.

Golden's approach to making these images reflects, in part, the process used to reproduce them, in which the lines and colors are printed separately. What is unusual, however, is the extent of his involvement, performing tasks -- penciling, inking and coloring -- that are generally done by different people.

The end result is a crisp, clear, minutely detailed image, full of dramatic action, that sums up the key characters and storyline (based on a television series of the early 1990s) of interstellar war between humans (Terrans) and Neosapiens, an artificial race of slaves created by the Terrans who then revolted against them.

Other fantasy-adventure works in the show depict Superman, the Micronauts, Spartan X, Bucky O'Hare and Jurassic Park. Golden's brush and ink drawing for the cover of "Jurassic Park Returns #4" shows his incredible skill in creating a wide-range of illusionistic effects, such as the detailed representation of the immense, open-jawed Tyrannosaurus whose shadow is about to swallow the terrified couple at the right.

The show also includes cover art from Golden's "The 'NAM" series, which deals with the experiences of ordinary soldiers in Vietnam. The example on display shows soldiers leaving hostile terrain by helicopter. Other works in the series depict their interactions with fellow soldiers, the Vietnamese, or civilians in the United States upon their return home.