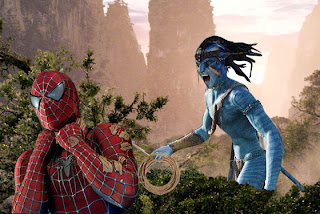 Interesting take on the recent developements. As reported in The New Yorker. You can read more as well as various comments on the link below.

The Green Goblin couldn't kill Spider-Man. Nor could the Sandman, Dr. Octopus, or even that anticlimactic black goo from Spider-Man 3. So how was Tobey Maguire's webslinger finally squashed? Oddly enough, insiders say it was Avatar.

Director Sam Raimi isn't commenting on exactly why he pulled out of Spider-Man 4; Columbia execs are mum, too. But production insiders tell Vulture that after seeing James Cameron's fully immersive film, Raimi wanted all sorts of envelope-pushing CGI (though not 3-D, which the studio was considering). Such effects would take more money and, just as crucially, more time. But the studio, whose corporate parent Sony must answer to Wall Street, had set a strict May 6, 2011 release date, and missing that date would mean depriving Sony of a billion dollars in revenue. “Every movie is a power struggle,” explains one producer on the Sony lot familiar with the fracas. “But the tipping point was that Sam wanted to do certain things that would push the envelope in terms of [special effects] ‘toys’ and other visual stimulation, and Sony didn’t feel that was essential to the franchise.”

The studio is obviously upset about losing such a huge tent pole, and yet script issues with Raimi had them nervous about the project anyway. After three different writers, the Spider-Man 4 script was still a schizophrenic mess, and according to a knowledgeable production insider, the Spider-Man story line championed by Raimi “threatened to torpedo the whole franchise.”

Condensed, it went something like this: Peter Parker gets over MJ, finds a new girl, falls in love. But: Peter also discovers her father is actually the Vulture, a naughty green guy with wings to be played by John Malkovich. Peter is torn between the love of his new lady and taking down the Vulture. Being a Spandex tight-ass, he decides to take down the Vulture, and kills him. This patricide goes down poorly with Peter’s new fiancée, and she rejects him. Despondent, Peter decides to abandon his superpowers, and Movie No. 4 ends with Peter Parker throwing away his Spider-Man mask, and audiences wondering if they are watching Superman II.

Sony’s execs didn’t much care for this dour story line, and its consumer-products division especially detested the villain who, let’s face it, is pushing 60. (But hey, John Malkovich, from one Vulture to another, we think you look great! Really!) Columbia’s toy partner, Hasbro, also worried that suggesting its main character was packing it in might hurt future toy sales. And these days, toys are a key revenue stream, and demand far more forethought than that given to the scripts of $200 million movies. "This is piecemeal, old-school Hollywood mentality," says Jeff Gomez, President and CEO of Starlight Runner Entertainment, which advises studios on how to define their franchises' universes and mythologies for maximum toysploitation. (Past clients: Pirates of the Carribean, Transformers: Revenge of the Fallen, and — wait for it — Avatar!) "Spider-Man belongs to a millennial generation that demands continuity, and that requires long-term and careful design. None of that has existed for Spider-Man since the second movie."

Columbia was about to bring in — yet again — screenwriter Alvin Sargent (who wrote 2 and 3 and is also the husband of former Spider-Man producer Laura Ziskin) to fix things, but by that time it was too late: Raimi had become convinced that even if the script were perfect, he still couldn't hit Sony’s immovable date, and he was out.

Now the studio is scrambling to find something to play in the summer of next year, but it also may be relieved to be rid of such a creatively muddled financial burden. Director Raimi and star Tobey Maguire were being paid a fifth of the film’s gross, and neither seemed to have a clue as to what story, exactly, they were telling.

The planned reboot with younger talent will be far, far cheaper. You can almost imagine Columbia chairman Amy Pascal screaming at her pool of assistants: “Somebody get me that kid from Twilight on the phone!"