The Expendables Face Hell in Graphic Novel
The Expendables are about to face a hellish task in a new graphic novel with story by Sylvester Stallone and Chuck Dixon, and art by Graham Nolan. The trade based on characters from the three-film action series is currently seeking backers on indiegogo.com. Perk levels start at $30 for a copy of the book and a pin-up all the way to $2,500 for variant cover art.

This time their mission will really be hell. Barney Ross is wounded during a mission and wakes up in Hell. He is joined by the other Expendables and some of history’s most formidable warriors in a fight against Satan himself – and villains from thousands of years of warfare.

The graphic novel includes the 50-page main story with three side quests. In “The Bridge,” Barney finds the soul of his still-living friend Tool in Hell, “Christmas in Hell” sees Lee lured away from the team, and in “Barbarian’s Holiday,” Gunner tries to make the best of a bad situation. Art for these stories are provided by Jason Johnson (Team 7), Kelsey Shannon (Norah’s Saga), and Butch Guice (Doctor Strange). 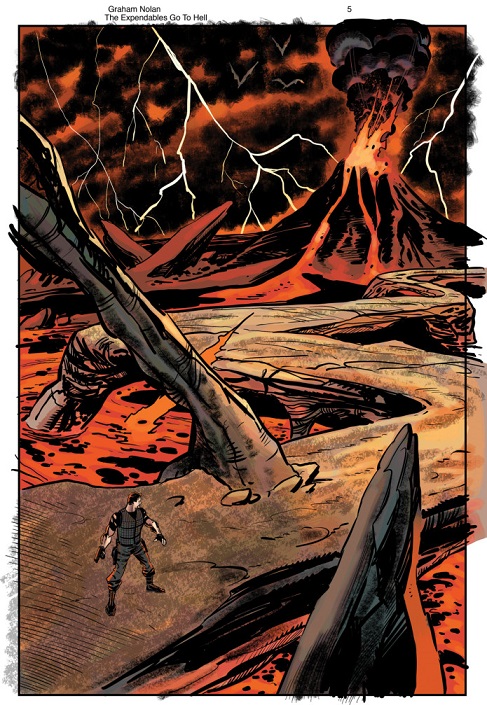 The graphic novel comes with a main cover by Shannon with variant covers by Billy Tucci (Shi), Richard C. Meyer (Jawbreakers), Renzo Rodriguez (Desolation Wave), and Johnson.
Those interested in backing the campaign can do so at indiegogo.com.


For more information on booking Graham Nolan for your event, contact us at: evaink@aol.com
Posted by Eva Ink Artist Group / Pros and Cons Celebrity Booking / HappySpacePOPCon.com at 7:52 AM