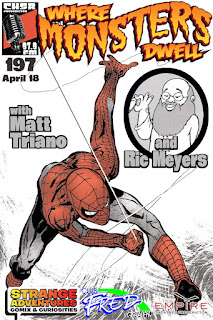 Artist Matt Triano and writer Ric Meyers, represented by Eva Ink Artist Group, live on the Radio Wednesday night. Here's how to listen as Matt talks about his new work at Zenescope and Ric discussing his new movie "Films of Fury!"

"This week on a DOUBLE DOSE of Where Monsters Dwell goodness, we get back to our old ways a bit and bring you two feature length interviews with a couple of interesting dudes.

First is Matt Triano. Matt has written and drawn comics for collections and anthologies by publishers such as Moonstone, DC and Atomic Press. His art can currently be seen in works for Robin Hood Charities in New York, Moonstone (Captain Action), Zenescope (Grimm's Myths and Legends), The Discovery Channel and Marvel Trading cards (Marvel Characters), as well as a Batman story for the "DC Halloween Special."

As if that weren't enough, we then have a special interview with Ric Meyers. Ric was the first non-martial artist to be inducted into the World Martial Arts Hall of Fame for his contributions to the martial arts film industry. He's contributed to Starlog magazine, Famous Monsters of Filmland, he's written novels starring such characters as The Incredible Hulk and Dirty Harry and has more than two dozen other books of fiction and non-fiction to his credit.

If you have a question for Matt or Ric, feel free to post it on our Facebook wall or give us a call at 506-453-4949."
Posted by Eva Ink Artist Group / Pros and Cons Celebrity Booking / HappySpacePOPCon.com at 7:38 PM