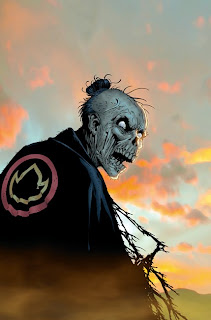 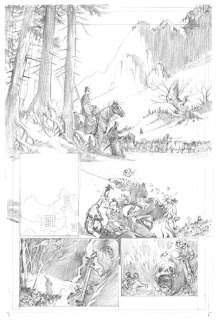 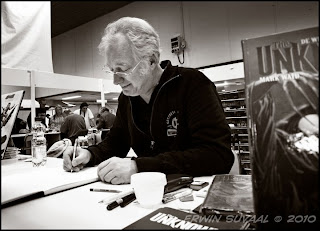 New York, NY-- Okay, to say that Minck Oosterveer is a "zombie" aritst is true enough....BUT far from describing this wonderful talent. We just wanted to get your attention. :-)

In fact, the award-winning artist is known world wide for a plethora of comic strips, movie work, and sequential art. Most notably here in the United States for such books as "Zombie Tales" and "The Unknown" with writer Mark Waid!

Throughout his career, Minck pursued an education to become a master of the arts, and has certainly succeeded.

In fact, Oosterveer's work is strongly influenced by Milton Caniff, Alex Raymond, and Will Eisner. After working for a studio on productions like 'Tom & Jerry', 'Sesame Street', 'Paddington', 'Ovide' and 'Spider-Man', Minck Oosterveer moved more in the direction of another stylistic forte, working with Willem Ritstier on the series "Claudia Brücken" for the Franco-Belgian publishing-house 'les editons Lombard' and Tintin-Magazine .


"From the moment Michael Golden and myself met Minck Oosterveer at a  festival in Lille, France,  we were struck by his witty sense of humor and his ease as a gentleman. After seeing his portfolio some time later, I also became aware of what an incredibly talented and versatile artist he truly is," commented Renee Witterstaetter of Eva Ink Artist Group. "Minck has that rare ability to find strengths in many art styles-- from Film Noir to cartoon, to American and European sequential styles.  The one thing that is never lacking is good storytelling. Is is obvious to me that he is indeed a student of the masters such as Will Eisner and Alex Raymond in that regard. As with any exceptionally good artist, even his covers tell a story. To top that, not only is Minck a consummate professional dealing with deadlines and clients, but he is also the creator of his own intellectual properties.

Currently, Minck Oosterveer is scheduled for several European and US shows in 2011, with more to follow.


For more information on Minck, his commissions, and appearances contact Renee at evaink@aol.com
Posted by Eva Ink Artist Group / Pros and Cons Celebrity Booking / HappySpacePOPCon.com at 10:33 AM