Life for Virginia, AFTER Santa Claus...and the Power of the Printed Word! 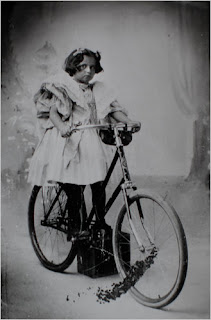 One of my friends rather astutely asked me, after I reprinted the famous "Yes, Virginia, There is a Santa Claus" letter from the New York Sun Times a few days ago, if perhaps Virginia O'Hanlon perhaps felt lied to later in life, about the existence of Santa Claus (which I don't think she really was, you know).

AND, after a little research, on my side of the checkerboard, It seems that she did NOT at all feel deceived, and led a life herself of helping, and answering questions for, children-- first as a school teacher and later as a principal, and attributes the Santa Claus letter as helping her find a good direction for her life.

Not to mention that the letter itself is one of the most reprinted newspaper articles of the last 100 years, read by who knows how many millions! That's pretty powerful stuff!... This goes to show what I strongly believe--that the printed word is of immense importance--in shaping our present and our future, and has the capacity to inspire generation after generation.

I find it of particular interest that the writer Francis Pharcellus Church was a journalist during the Civil War...the first conflict that was truly recorded both in print, and for the first time in pictures, bringing home to the average person, in an unavoidable way, the horror and toll of war and the brutality of death. The fact that he could have seen so much tragedy and still found it within himself to write such inspiring words, full of love and hope is a profound revelation...

I would have liked to have met him...

It also makes me remember, that here at the brink of our digital age, we must find ways to archieve what is important to us. In whatever medium that turns out to be...

Now, for example, It's hard to imagine what a Sarah Berhardht play would have truly been like. What it would have felt like to be in that room? It was art for the moment, hanging in the air for a brief time, never to be relieved or replayed in exactly the same way. A finite commodity. Only so many genies in the bottle. The same can be said of a Caruso concert, which despite a few scratchy recordings, can never be reprised. Lost to us forever. So, what would it have never been like to have a copy of Mark Twain's "Tom Sawyer," or Charles Dicken's "David Copperfield" ...or to have Virginia's letter in a digital file that was deleted because a storage system was at capacity.

It's inconceivable to me.

I love nothing more than to see a post card from 1860, or hold a first edition with tipped-in Arthur Rackham plates, or take a peak at the declaration of independence when in Philly, or see the hand written directions for the famous Jam Cake that Maw Maw--gone nearly 7 years now-- wrote down for me. I remember it being near seven layers thick, with icing made of coconut that was so stiff that you could mortar bricks with it, and it tasted AMAZING.

You know...I never imagined back then, the day when she would NOT bake one of those during the holidays, and it would NOT be sitting under that glass domed cake dish... I still can picture that room in my mind, the table, the people, my Dad and I making sure we had our mincemeat pie, quite happy that nobody else liked it. :-) The debate of whether the dressing had too much sage or if we should put raisins in it or not (I like the raisins).

But I see her recipe, and I remember it all.

It's nice to have it down on paper... I'm sure you have things like that in your own life. Little scarps of paper that may mean nothing to anyone else, but mean the world to you...It's always a connection to our past. And the archieving of our history.

The power of the printed word... And that's only what a recipe can do!

With the power of the printed word, we have the ability to inspire, to influence, to provoke thought, to shape consciousness, as no other art form has the power to do.That is not something that should be casually lost, in my opinion. And I am a big advocate of finding a way of meshing the wonders of instantaneous communication with the beauty of a lasting legacy, finding a way to keep the artifacts of our human experience.

It's something to ponder.(Maybe even write about!)

And now, here is more about the fate of our Virginia, as I do my little part to spread her legacy into new forms of communication.

In 1897, Dr. Philip O'Hanlon, a coroner's assistant on Manhattan's Upper West Side, was asked by his then eight-year-old daughter, Virginia O'Hanlon (1889–1971), whether Santa Claus really existed. Virginia O'Hanlon had begun to doubt there was a Santa Claus, because her friends had told her that he did not exist.

Dr. O’Hanlon suggested she write to The Sun, a prominent New York City newspaper at the time, assuring her that "If you see it in The Sun, it's so." He unwittingly gave one of the paper's editors, Francis Pharcellus Church, an opportunity to rise above the simple question, and address the philosophical issues behind it.

Church was a war correspondent during the American Civil War, a time which saw great suffering and a corresponding lack of hope and faith in much of society. Although the paper ran the editorial in the seventh place on the editorial page, below even an editorial on the newly invented "chainless bicycle", its message was very moving to many people who read it. More than a century later it remains the most reprinted editorial ever to run in any newspaper in the English language.

In 1972, after seeing Virginia O'Hanlon's obituary in The New York Times, four friends formed a company called Elizabeth Press and published a children's book titled Yes, Virginia that illustrated the editorial and included a brief history of the main characters. The book's creators took the book to Warner Brothers who eventually did the Emmy award-winning television show based on the editorial. The History Channel, in a special that aired on February 21, 2001, noted that Virginia gave the original letter to a granddaughter, who pasted it in a scrapbook. It was feared that the letter was destroyed in a house fire, but thirty years after the fire, it was discovered intact.

Some people have questioned the veracity of the letter's authorship, expressing doubt that a young girl such as Virginia would refer to children her own age as "my little friends." However, the original copy of the letter appeared and was authenticated by an appraiser on the Antiques Roadshow in 1998. Its value was appraised by Kathleen Guzman, formerly of Christie's—now with PBS' Antiques Roadshow—at $20,000–$30,000.

Virginia O'Hanlon's full name was Virginia O'Hanlon Douglas. She was born on July 20, 1889 in Manhattan, New York. Her marriage to Edward Douglas in the 1910s was brief, and ended with his deserting her shortly before their child, Laura, was born. Virginia was listed as divorced in the 1930 United States Census.

Virginia received her Bachelor of Arts from Hunter College in 1910; a Master's degree in Education from Columbia University in 1912, and a doctorate from Fordham University. Virginia was a school teacher in the New York City School system. She started her career as an educator in 1912, became a junior principal in 1935, and retired in 1959.

Virginia O’Hanlon received a steady stream of mail about her letter throughout her life. She would include a copy of the editorial in her replies. In an interview later in life, she credited the editorial with shaping the direction of her life quite positively.

Virginia died on May 13, 1971 in a nursing home in Valatie, New York. She was buried at the Chatham Rural Cemetery in Chatham, New York.

Every year, Virginia's letter and Church's response are read at the Yule Log ceremony at Church's alma mater, Columbia College of Columbia University.

The story of Virginia's inquiry and The Sun's response was adapted into an Emmy Award-winning animated television special in 1974, animated by Bill Meléndez (best known for his work on the various Peanuts specials) and featuring the voices of Jim Backus and Jimmy Osmond, and in 1991 it was adapted into a made-for-TV movie with Richard Thomas and Charles Bronson. Another remake, a CGI animated story called simply Yes, Virginia, was first aired in 2009 on CBS with Beatrice Miller as Virginia, Neil Patrick Harris, Jennifer Love Hewitt and Alfred Molina providing the lead voices. In New York City, local television journalist Gabe Pressman has recounted the story each Christmas for the past thirty years.

In 2003 "Yes, Virginia, there is a Santa Claus" was depicted in a mechanical holiday window display at the Lord & Taylor department store on Fifth Avenue in Manhattan.

Virginia, depicted as a young cartoon character, is part of Macy's 2010 Christmas campaign and appears in their 2010 holiday commercials, inviting children to stores to write "Yes Virginia Santa Letters," and at the Macy's department store on 34th and Broadway in Manhattan as the theme for its 2010 holiday windows.

Email ThisBlogThis!Share to TwitterShare to FacebookShare to Pinterest
Labels: there is a Santa Claus, Yes Virginia