"Nick Cardy: The Artist at War" -- From Eva Ink Publishing 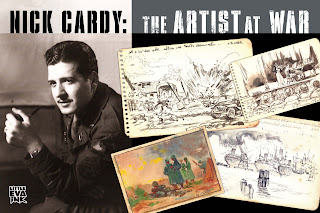 I can't even begin to tell you how excited I am about this new book from Eva Ink Publishing--"Nick Cardy: The Artist at War."

Not only do I consider this book a wonderful tribute to legendary DC Comic's artist, Nick Cardy, but the historical significance is what I love as well. It's a part of all of our histories....

I was that weird kid in Jr. High and High School, who spent most of her time in the library, reading books about the African Campaign and the military strategy in Europe. Why, at Westlawn Jr. High, my 9th grade history project was editing, directing and compiling a 2 hour slide show on the "war to end all wars." I particularly enjoyed writing the script. A lovely lady -- a death camp survivor, whom I'm sure is long gone now.... provided some wonderful narration. I think my teacher, Coach McGregor, was blown away, and ended up keeping the project to show to later classes. I won the History Award that year. LOL

As you can see, I REALLY am, and have always been, fascinated by history.

So, it was no wonder that on a recent visit with Nick, when he brought out a little binder, about 3 inches thick, and invited me to take a look, I was blown away by what I saw--- original sketch after original sketch, chronicling Nick's time in the army during World War II-- from the time he was drafted, through basic, to being dropped, perhaps woefully unprepared, into out and out conflict and mayham!

And this was the original book!

It was a foregone conclusion. I HAD to do this book.

What I love about this project, as I'm sitting here holding the original binder, is how it unfolds like a movie... slowly... the day to day of basic training, the mundane acts of getting your hair cut, or washing your face to go to mass.... plopping down totally exhausted to sleep on a thin canvas cot--surrounded by people, but separated from those you love.... from there, the pages escalate to the young man being shipped overseas, and almost immediately being dropped into towns in Belgium enduring relentless shelling, enemy tanks approaching around the corner, buildings exploding like paper firecrackers, reduced to rubble....and finally, Nick's own exit from the war.

Long before Nick Cardy became lauded as one of the best cover designers to ever work in the comics industry, this was part of his story...

I am so pleased to present this sketchbook in it's entirety, complete with Nick's own commentary, in a hardcover 6x9, 128 page book. Also included in the deluxe edition will be a 30 minute DVD interview with Nick talking about his experience.

In these pages, you can see the same attention to movement of the human body and knack for page design so apparent in all of Nick later illustration work.

So, I invite you to come on this journey--because again, that is surely what it is--one man's journey...during a horrible war...echoing perhaps the experience of millions.

Here is the Diamond Solicit for ordering:

"Nick Cardy: The Artist at War"

Sketch Edition with Original sketch by Nick Cardy and DVD:


"Renowned cover artist and illustrator from DC Comic's golden years, Nick Cardy now in his 90's, has been drawing his whole life. And thank goodness for it, as he contributes now to not only our comics history, but to our history as a nation as well. Before beginning his career in comics post World War II, Nick was one of our young men shipped overseas to take part in the “war to end all wars.” Without benefit of a camera, Nick did what he did best-- carrying a sketchbook and documenting his time in the war from beginning to end. The humor and the horror. What we have at the end of the book, is a chronicle, one man's journey, that speaks for millions. Each sketch and painting accompanied by Nick Cardy's own commentary. A must have for fans of comic art and history as we hear it from the mouth of an industry legend, and see it with our own eyes."

This book can be ordered from Diamond directly or from Eva Ink Publishing: evaink@aol.com
Posted by Eva Ink Artist Group / Pros and Cons Celebrity Booking / HappySpacePOPCon.com at 12:29 PM