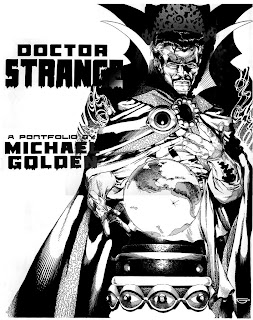 Golden and Texeira Hit the Mark at the "Comic Book Marketplace"
New Art Books Available/ Visionaries Panel Planned
New York, NY-- There is no venue quite like the Big Apple, and with the weather getting a bit chilly out there, here's the perfect chance to warm up, grab your own bite of what the city has to offer, and meet some of your favorite comic book creators in town for this unique one day event, all at the same time!

Mike Carbo’s New York Comic Book Marketplace is set for Saturday, February 27th, from 11am to 7pm, at the Penn Plaza Pavilion, 401 7th Ave at 33rd St, New York City! Admission is only $10 for the day, and the show is sure to feature lots of dealers selling comics, toys, DVD's and more. We already hear that some of our favorites will be there, including Shelton Drum of Heroes Aren't Hard to Find, and our friends at Motor City Comics as well!

In addition, Michael Golden, Bill Sienkiewicz and James H. Williams III will be on the "Visionaries" panel slated for 1:00-1:45, moderated by writer/publisher Renee Witterstaetter.

For more information on this and future shows, visit: http://www.nycbm.com/