The Case of Dr. Who's Possessed Neck Warmer 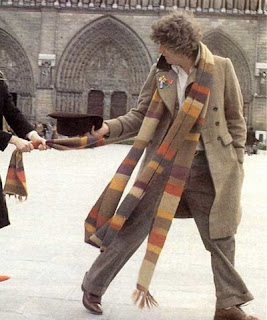 Alas, I have not been a avid watcher of Dr. Who. I know. Forgive me in advance!

But I did find this story fun, nevertheless. :-)

Having been the victim of boots that seem to shrink and grow for no accountable reason. Gloves and socks that disappear and reappear seemingly at will, and cel phones that call people I really have no interest in talking with and at the most inopportune times, I can relate.

When Tom Baker was introduced as Dr. Who in 1974, the costume designer contacted a knitter named Begonia Pope to provide him a scarf. He gave her an armload of different yarns and sent her on her way. Begonia returned with a twenty foot scarf.

Despite the misunderstanding, that the designer simply wanted Begonia to choose a colour and knit a scarf instead of using all the yarn, the icon scarf stayed and was first seen in episode “Robot”.

Over the years, the scarf went through sizing changes as well as color changes without explanation. Costume designer James Acheson was quoted as saying, “it was so completely bizarre, for weeks the scarf would be fine, and then all of a sudden, one day we would come in to work and it would have shrunk three feet. We couldn’t explain it.”

Though the crew was wary of giving too much credit to the strange happenings with the scarf, Tom Baker began complaining that the scarf would become uncommonly clingy and often caught tightly around this throat. At this point both cast and crew couldn’t ignore the behavior of the scarf even if they couldn’t explain it and decided to retire the well known accessory.

Some of the more superstitious crew members went to question Begonia Pope, the women who knit the scarf, but neighbors had claimed she had not been seen for almost seven months and her leaving was quite abrupt as her home was intact, though covered in a thick layer of dust.

In 2005 the strange scarf was auctioned off to Richard Cohen from Long Island. He was more than happy to answer questions about the scarf and has admitted to wearing around a few times but denies having worn it after the first three months. He appeared upset when questions about the odd happenings with the scarf were brought up however. He denied noticing anything out of the ordinary and quickly changed the subject.

_______
(The above was taken off an internet blog site. Can't find the link right now. I didn't write it or report it. But interesting nonetheless.)
Posted by Eva Ink Artist Group / Pros and Cons Celebrity Booking / HappySpacePOPCon.com at 1:26 PM

Email ThisBlogThis!Share to TwitterShare to FacebookShare to Pinterest
Labels: doctor who, dr. who, scarf