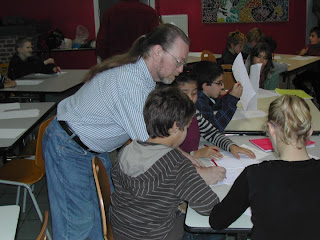 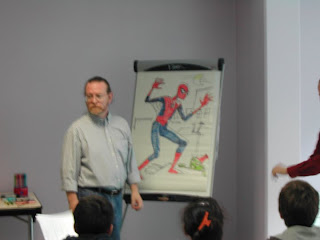 Hi Everyone!
Recently at the Lille Comics Festival, my business partner Michael Golden not only was the Guest of Honor at the show, but he was also awarded a Lifetime Achievement Award by the show as well!
In my opinion, it is richly deserved. Michael's work is....well...simply brilliant!!
And, although I have hired Michael to work for me over the last 2o years during my editor days, I have been honored over the last few years to watch him work up close, step-by-step, at various appearances around the world, as well.
At that is a unique experience. Nobody approaches a page or thinks the same way about a page as Michael Golden!
Just so you know... Michael and myself have also been developing an intensive storytelling workshop that we hope to debut in venues within the next year or so. The 1-2 day course (depending on venue) will focus on the elements of good sequential art craft as well as the business of being an artist. More on this later....
In the meantime, you can catch the truncated course for free at many venues around the nation and the world as we visit various conventions and festivals. Michael has recently taught and lectured at places as diverse as Spain, Belgium, Canada, China, France and domestically in Chicago and numerous US shows.
While in Lille, part of our visit included the customary autograph sessions at stores and sketching at the convention, but Michael also offered to teach a version of his course at one of the local schools as part of the cross-cultural exchange.
Below is the link to some of the photos of this Masterclass, this one geared towards young students:
http://picasaweb.google.fr/spidersim5962/LilleComicsFestival?authkey=Gv1sRgCMrn7eDIqJSdhQE&feat=email#
Congrats to Michael. And check back soon for more information on his future teaching venues.
--Renee
:-)
(Top, Golden at the Lille Festival. Following, several photos from his art class in Lille.)
Posted by Eva Ink Artist Group / Pros and Cons Celebrity Booking / HappySpacePOPCon.com at 5:20 PM