Fo the past four seasons, fans around the world of the Netflix animated series, “VOLTRON: LEGENDARY DEFENDER” have known Neil Kaplan as the evil galactic Emperor Zarkon. 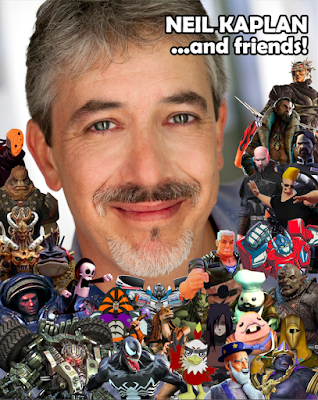 Not to mention (although of course we ARE), Neil Kaplan is also the actor that gave voice to iconic hero Optimus Prime-- one of the most recognizable characters in animation--on the original "TRANSFORMERS: ROBOTS IN DISQUISE."

“DESTINY 2”, the highly anticipated video game sequel has finally been released worldwide. At the center of this epic story is the antagonist, Dominus Ghaul. The fear inducing voice for Ghaul is provided by Mr. Kaplan.

Millions of video game players & fans around the world already know him for his captivating work in Blizzard’s massive hits “STARCRAFT II” and “HEROES OF THE STORM” as the roguish anti-hero, Tychus J. Findlay, as well as Lord of the Forest, Cenarius in “WORLD OF WARCRAFT”. He is adored by “LEAGUE OF LEGENDS” fans as the voice of space dragon Aurelian Sol. “STAR WARS” fans know him as any number of humans, aliens or droids such as Skadge, Governor Adlehard, Boss Ganne, Darth Bandon and Bendak Starkiller from the video games “Old Republic”, “Uprising”, “Battlegrounds” and “Knights of the Old Republic”.

Anime fans loved Neil as Hawkmon on “DIGIMON” and continue to love to hate him as villainous Madara Uchiha on “NARUTO: SHIPPÛDEN”.

He has been the voice of numerous MARVEL characters in such works as: "Spider-Man: Battle for New York," "Marvel Anime: Iron Man," "Marvel Anime: Blade," "Spider-man Unlimited," "Marvel Heros," and "Justice League Heroes." His popular voices include such notables as Green Gobin, Venom, Sabretooth and Gorilla Grod!

Audiobook enthusiasts know him as the narrator for several books including the popular YA series, “I AM NUMBER FOUR”.

Currently, he’ is also the voice of CNNN on Chuck Lorre’s “Disjointed” airing on Netflix.

Neil is available for panels at your show, and even has a few he'd like to suggest. Custom voice work to promote the show is also possible.