A Life in Words-- Interview with Renee Witterstaetter, "Texarkana Gazette," 12-30-12


Renee's Notes: A visit home to Texas this Christmas, included a nice interview with the local newspaper, "The Texarkana Gazette." Back in college, I also wrote travel articles for them. So it was kinda fun to see myself on the front page. A few things I talked about in the interview didn't make it into the final article. So, I'd also like to mention the names of these several folks who were important to me early on, and whom I've never forgotten. Besides of course, going more in-depth about my parents, Erma and Raymond Witterstaetter, who sacrificed so much of their time and energy to raise my brothers and I, there are others... 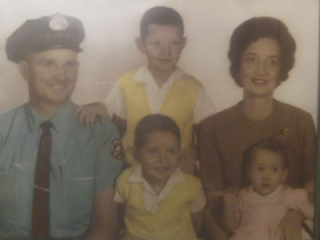 Namely, Coach McGregor who was my history teacher at Westlawn Jr. High School, Mark Gruenwald, my boss and wonderful teacher at Marvel Comics. Craig Anderson, my direct boss at Marvel Comics, and Jim Salicrup, my friend and boss at Topps Comics. All people I feel blessed to know.

Since you have to have a subscription to the paper to read the story on-line, here is the article in it's entirety. 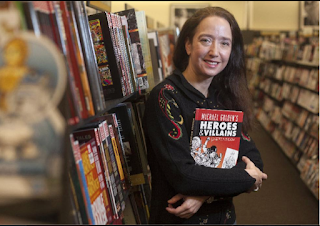 
*Renee Witterstaetter, a writer, comic book editor and color artist who has worked for Marvel and DC Comics, holds a copy of one of her books, "Michael Golden's More Heroes and Villains," on Friday in the graphic novels section of Books-A-Million in Texarkana, Texas.

Witterstaetter, a 1980's graduate of Texas High School and East Texas State University-Commerce, spent her childhood reading, writing and watching old movies. She said her introduction to comics came from reading comics collected by her brothers, Robert and Ray.

"Spider-Man," specifically the issue where Peter meets Mary Jane, by Marvel Comics and DC Comics "Jerry Lewis" books…these were the first comics I discovered as a kid from my brother's collection, long before I knew I'd ever work in comics."

Witterstaetter said she returns to East Texas two or three times a year to keep herself grounded and reminded of the place where she "found the early love of storytelling," including the inspiration from her grandmother.

"(She) was always writing poetry," Witterstaetter said of grandmother Eva Hicks of Texarkana. "She made quilts and used them to remind her of a story from her life with fabric from an old dress or a flour sack." 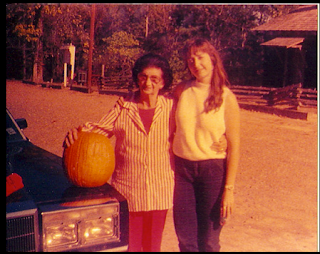 (My Grandmother, Eva Vann Hicks with me right before my move to Connecticut, and below as a teenager.) 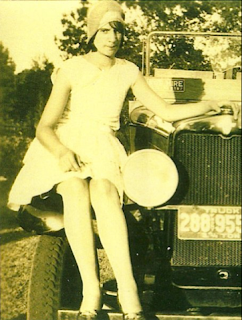 In December, Witterstaetter visited Books-A-Million in Texarkana, which sells a number of graphic novels that list Witterstaetter's name in the credits.

Witterstaetter is the daughter of Erma and Raymond Witterstaetter. She said her influences were many, including elementary teacher Jewel Gwyn; French teacher Sue Kimbro, who encouraged her to got to Paris on a school trip; high school Journalism teacher Connie Penny; and college professor Dr. Lawrence McNamee, who taught her about William Shakespeare and worked with her on writing collaborations. 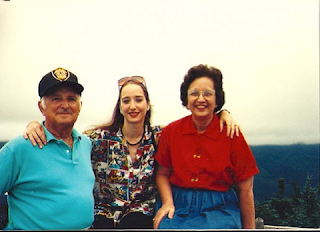 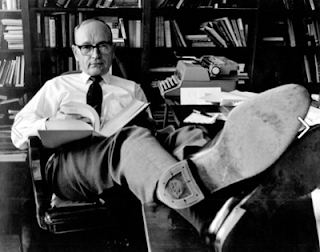 (Above, my parents visiting in Connecticut, and my dear friend Dr. Lawrence McNamee.)

Witterstaetter said she became aware of her creative aptitude when she won an award in Junior High School for a World War II slide show. She recruited a concentration camp survivor to narrate the project. 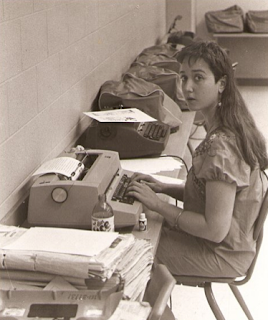 (Working at the East Texan at ETSU Commerce.)

Just after completing college, Witterstaetter left East Texas to work at a company that organized comic book events. Eventually, she became an editor at comic book publishers DC, Marvel and Topps. She worked on "Superman" at DC. At Marvel she worked on the "Silver Surfer," "Conan the Barbarian," the reintroduction of "She-Hulk" and the "Conan Saga." At Topps, she was the editor for "Jurassic Park," "Xena" and "Hercules." She is the co-creator of the comic book series "Spartan X" with artist Michael Golden. 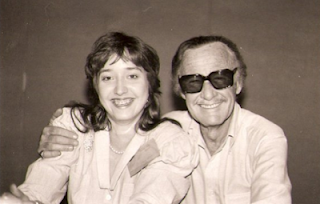 (With the one and only Stan Lee at the Dallas Fantasy Faire, where I was the Co-Chair.) 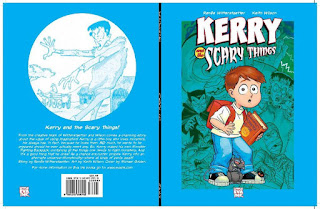 (Children's book, "Kerry and the Scary Things," with cover by Michael Golden, text by Renee Witterstaetter and illos by Keith Wilson.)

Witterstaetter said her career--which took her from working with a Dallas company that organizes comic conventions, to authoring her own books, to working on music videos with Madonna, Usher and Seal--is proof that "doors are always opening."

"When a door opens and it feels right, that's what I do. I am very fortunate and blessed."

"It's a small industry, and everyone knows everyone in the industry."

One of those Witterstaetter knows is Mike Carlin, an editor at Marvel and DC.

"He taught me a great deal about the essentials of telling a good story."

Witterstaetter travels to China, Norway, Spain, Australia, Costa Rica and Hong Kong and other places have introduced her to celebrities, including Jackie Chan, about whom she wrote a book and whom she considers a good friend, and famed comedian Buster Keaton's widow, Eleanor, whom she traveled to Los Angeles to introduce to Chan at one point.

Witterstaetter worked with Chan on his movie "Rush Hour 2" and with Anthony Hopkins on "Red Dragon." 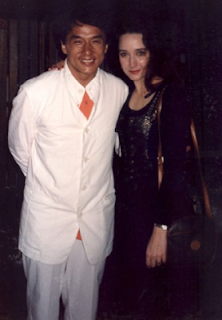 (With Jackie in Hong Kong, on his birthday one year.)

Witterstaetter studied journalism in high school, at Texarkana College and at Texas A&M Commerce. She was the editor of the Tiger Times, TC News and at A&M (Then ETSU)--Commerce's student newspaper The East Texan. She also worked at Citizens Tribune newspaper in New Boston. 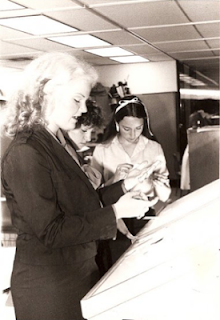 (Working on the school newspaper at Texas High School.)

Witterstaetter said most o the books Eva Ink publishes are limited edition, and some are picked up by other companies for various foreign editions. Her book "Nick Cardy: The Artist at War" recently was picked up by Britain's Titan Publishing. The book can be purchased on Titanbooks.com and will be in bookstores soon.

Cardy is a movie poster artist and a comic book artist on DC's "Tomahawk," "Aquaman" and "Teen Titans."

Witterstaetter said the idea for the Cardy book came after she visited the artist a couple of years ago. He showed her some of his never-before-seen combat sketches of World War II. Cardy, 93, carried his artist tools with him while an assistant tank driver in the 3rd Armored Division. He received two Purple Hearts. 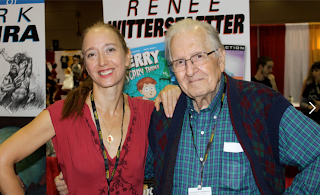 (With Nick Cardy at MegaCon in Orlando, Florida.)

Witterstaetter said despite the popularity of electronic media, there always will be a place for paper books.

"It's a treasure that shouldn't be lost…(It's) an artifact, history of our existence as people," she said.

Witterstaetter, who fancies ballroom and Salsa dancing and still likes to fish in NYC's Central Park, has a number of nieces and nephews in East Texas. She will travel to Russia next year to lecture on comics.

A partial list of some of the books on which Renee Witterstaetter has worked:

*"Dying for Action: The Life and Films of Jackie Chan," Warner Publishing, author Renee Witterstaetter (1998). Updated version due in 2013.