Eating Manhattan: Bombay Talkie! Give Me Something to Talk About 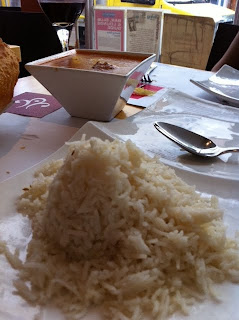 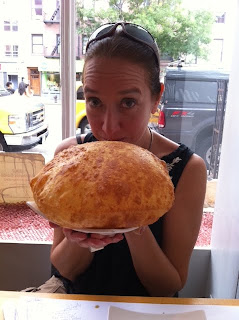 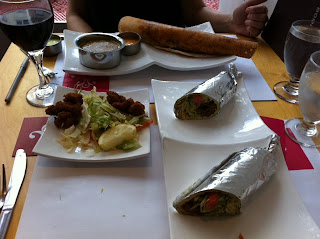 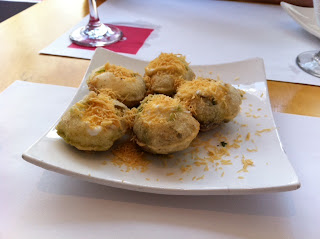 I feel rather guilty...

It is after all entirely my fault.

You see, I had an appointment at the Chinese Embassy to get a Visa, I was rushing to get out of town for Wizard Chicago, but I still wanted to see my friend Ric for lunch, say a belated Happy Birthday, and experience something new on our nosh outings in Manhattan.

But the trek would have meant my having to lug luggage with me across the known universe of the island, and shoehorn it into the usual tiny eateries we frequent.

Then, it dawned on me: I had a coupon!

Not just any coupon, but a Groupon Coupon.

Let me explain. If you don't know about Groupon, it's fantastic. Each day you get offers on restaurants and events in your area, with savings of up to 50% off, sometimes more. I'd seen this restaurant, "Bombay Talkie" on the same street as my office for some time, and had wanted to try it. So, when Goupon offered $30 worth of food and drink for only $15, I bought the deal, and filed it away for future use (always check the expiration dates, they do vary).

I made the suggestion to Ric (because selfishly, it fit my needs), and he was all for it. An adventure is an adventure after all.

The idea of Bombay Talkie did sound inviting. Advertised as a new age Indian restaurant with a hip Indian movie themed decor and menu. I remember when it first opened, wondering how the fare would compare to my regular haunts on East 6th Street (the NYC mecca for good AND cheap Indian food for decades).

I was about to find out.

When you initially walk up to Bombay Talkie you first notice all the awards lining the window. That's a good sign. Right?

Arriving before Ric, I picked a window spot, and glanced at the uber-hip Indian movie related paintings adoring the walls of the tiny place. one depicting a lady getting dressed after what was obviously a tryst.... probably some scene from a movie I don't know... not being versed in Indian movies... but who knows.

Yes... this was certainly not "my mother's Indian restaurant (although I don't think she's ever tried Indian food...)." It was also certainly not one of MY 6th Street eateries either...

I was told that normally that BT has a buffet for lunch line (never the sign of a healthy place), but not today, so we'd need to order from the menu. However, they would let me use my coupon, which was normally just for dinner (I didn't know!). That was terrifically nice of them. In fact, the waiter was nice throughout, I have to say.

It was easy to make our choices. Everything on the menu sounded terrific.

A selection of appetizers (Or "Street Bites", as they called them), seemed in order:

Papdi Chat--Crispy flour purses stuffed with potatoes and chickpeas with a tamarind and yogurt sauce ($7.)

We followed this with one entree to share (Or "From the Curbside" as they called them):

I always start with the negatives, if there are any, and try to leave with the positive. So here we go.

We knew we were in trouble when the Papdi Chat arrived and we bit into something we expected to be hot. It wasn't. It WAS icebox cold, and the yogurt oozed out in a globby mess with each bit. In fact, the yogurt overpowers the purses completely. We were so taken aback by the abruptness of the dish, that Ric asked if it was "meant" to be cold. We were informed that it was.

The Kati Rolls were okay. Somewhat flavorless, but a dab of hot sauce sparked them up nicely. Expected more flavor from the lamb, which seemed pre-cooked. End of notes.

The Ginger Pork Kebobs were no-doubt the worst. The meat had been cooked so long, it was like inedible beef jerky, and resembled dried things I've seen in dusty bins in Chinatown. To add insult to taste bud injury, it was served on a bed of BROWN iceberg lettuce that should have never seen a plate. Really?

And the main dish, the overpriced, small serving of Malai Kofta--presented in a jaunty square bowl to remind us of how hip we were being by not eating on 6th Street-- had the texture of meatballs, not dumplings. These may have been okay (albeit mushy), but all you could taste was the sauce (which wasn't half bad at half the price.)

The only dish I'd recommend truthfully, if you should find yourself sitting in Bombay Talkie for some reason, is the Dosas. I did like this. The crepe was crispy, the lamb tasty and the serving ample. I could see having a few of those with a glass of wine or beer and being happy. They come in varieties of lamb, beef and vegetarian.

The refreshing Lychee/Kiwi drink that Ric ordered, was also great, but overpriced at $7.

Speaking of wallet matters, even with the Groupon Coupon as the bait I needed to walk in the door, the final tab of $70. was spilling over the top for a lunch time stop! Yikes!

Sadly.... and really.... I thought this would turn out differently... one dish out of five, means I just can not recommend Bombay Talkie.

Ric and I paused briefly outside to look over the awards in the window. With closer inspection, I now saw that they started circa 2006, and the last one for the Micheline Guide (which was more just a listing) was 2009. Remembering the scratches and scuffs on the walls, and the lackluster plating with brown lettuce, made me wonder if Bombay Talkie's heyday was sometime in the past as well... If I'd missed something truly extraordinary when it first opened, that had somehow now been lost.

It was as if someone was following a list of ingredients, with no idea what it was that originally took that simple list, adding some secret spark, that would turn it into something wonderful...

Had it been sold? Had the chef left? I have no idea...but something happened here of mammoth restaurant portent.

What I can see this place as being good for is a West Side tapas stop, ala San Sebastian,Spain -- jumping from place to place for one drink and one nosh. And yes, I can only recommend the Dosas for that. The atmosphere might also be great for a quick drink before dinner (somewhere else) or the theatre, or for a business meeting, since the atmosphere was fairly quiet.

Oh,and,the puffy bread was impressive in it's puffiness.

As we left, Ric announcing that he had to head to the Chelsea Market to buy some ice cream to cleanse his palate, said, looking for a silver lining: "Well, just for the record, I didn't totally hate it."

I told Ric I'd pick up the tab.

It was the least I could do.

(Bombay Talkie is located at 189 9th Avenue in Manhattan. Note: Prices on website are lower than menu on premises. Lunch hours available, but not listed on website.)
Posted by Eva Ink Artist Group / Pros and Cons Celebrity Booking / HappySpacePOPCon.com at 10:11 AM