NYCC is Back! Golden, Texeira and Scott lead up to the Big Event with Podcast and Gallery Opening!

Hey Folks-- Don't forget all the events this week. Steve Scott's podcast talking about his new Batman issue is on Wednesday night, and we have a gallery show opening at Illustration House on Thursday night, Oct. 7th!

See you at one of the events in the Big Apple! And I know, this kitty has nothing to do with anything, but Michael photoshopped it, it's cute, and it IS in costume. :-)
--Renee 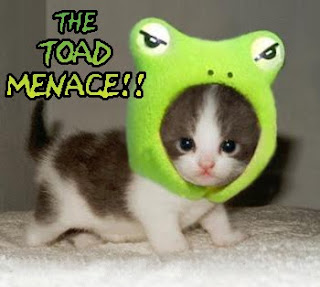 New York, NY-- Get your costumes ready! New York ComiCon is back! This next weekend, Oct. 8-10th, and the Javits Center once again fills up with everything comics and anime! Joining the artistic line-up for the show will be comics creators Michael Golden, Mark Texeira, and Steve Scott, leading up to the big event with a podcast AND a gallery opening!

Michael Golden is known for many titles in his artistic legacy, notably as being co-creator of Rogue, Bucky O'Hare, Spartan X, Marionette, Bug, and more beloved characters. His storytelling work is touted in such books as "The 'Nam," "Doctor Strange," "Avengers," "G.I. Joe," and much more. You can see his recent work on covers for Marvel Comics, and more storytelling is in the works as well, starting off with pages inked over the legendary Neal Adams in their recent Batman collaboration. Michael will be located at table G-1 in Artist Alley.

Fine art painter and storyteller Mark Texeira is known for his stunning covers on so many Marvel comics, it would be hard to name them all. Titles routinely associated with his name include "Ghost Rider," "Black Panther," "Moonknight," and much more. Recently, Mark just completed a Punisher mini-series that will hit stands soon, as well as a few other projects for the Big M. His covers have also recently appeared as frontage for Vampirella and numerous other titles. Mark will be located at table G-3 in Artist Alley.

Artist Steve Scott will be on a special podcast the Wednesday before the NYCC, Oct. 6th, of "Where Monsters Dwell." Go to wheremonstersdwell.ca to find out more, as Steve will be talking about his exciting new Batman project that should be hitting the stands just before the convention! Steve will be located at table G-4 in Artist Alley. Known for his work on "Indiana Jones," "She-Hulk," "Hulk," "JLA," and much more, you can see a preview of Steve's Batman project on newsarama at:

Writer, editor and publisher Renee Witterstaetter will be joining the guys to sign copies of her new books "Excess: The Art of Michael Golden," and "Tex: The Art of Mark Texeira," both published by Vanguard Productions. She will also have copies of her film book "Dying for Action: The Life and Films of Jackie Chan," as well as copies of her numerous comic book work to choose from, including "Spartan X." Coming up for Renee is the impending publication of her new book "Kerry and the Scary Things." Stop by Renee's table and talk to either Renee or Constance, as well to inquire about commissions from any of the fellas above. Renee will be located at table G-2 in Artist Alley.


AND, don't forget, all three artists are being honored at a gallery opening in Manhattan, and YOU are invited. Eva Ink Artist Group and Illustration House are hosting an opening for Golden, Texeira and Scott at Illustration House on Thursday night, Oct. 7th, from 6-8. The address is 110 West 25th Street.

With podcasts and gallery shows galore, what a great way to lead up to the NYCC. See you there!


For more information on the artists and commissions contact Renee at: evaink@aol.com
Posted by Eva Ink Artist Group / Pros and Cons Celebrity Booking / HappySpacePOPCon.com at 9:05 AM