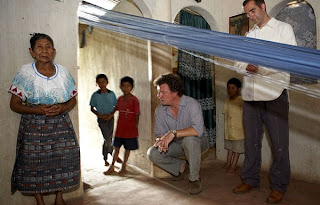 Hi All--Just in time for Christmas, I found this interesting article on how a Bronx priest is having locals in Guatemala spin cotton, which is then turned into trendy threads by folks in the Bronx, and which now is hitting the fashion world because the clothes are organic and sustainable. I particularly like this story because the non-profit helps folks in Guatemala earn a living, while also providing jobs in the Bronx and helping those in need including underfunded schools in the community. This is one example of people out there trying to make a difference in this crazy world, and I salute them. Check 'em out a bit more below from the NY Daily News article, from December 7th.

Bronx Priest in the Fashion World

Ahalo is not an accessory one envisions on Anna Wintour.

Yet the Vogue editor's discovery of a fashion designer who happens to be a priest is causing miracles in his Bronx parish and beyond.

"It was an act of God, it really was," says the Rev. Andrew More O'Connor - the fashionista priest of Holy Family Church in Castle Hill.

"I was helping a young woman and her fiancé prepare for their marriage and she said I'm an editor at Vogue; I'd really like to see your clothing line."

That would be Goods of Conscience, made from organic soft cotton cloth hand woven by the Mayan Indians in Guatemala - O'Connor calls it "social fabric."

Seamstresses tailor it right there on Castle Hill Ave. into unexpectedly chic wraparound blouses, black sheaths and even men's suits.

So the bride-to-be, Devon Schuster, Vogue's market editor, went down to the workshop to take a look. "The next day, this is where the act of God comes in," O'Connor says, "Anna Wintour told her staff, 'We can't do the dresses we were planning on for our Cameron Diaz cover story.'"

Cameron is the Queen of Green and only wants clothing made from sustainable grown fabrics - something that's hard to find in the high-fashion market. So Schuster piped up and told Wintour about O'Connor's line of clothes.

"So they called me up and Vogue picked up some of the collection and flew it out to Los Angeles," O'Connor says. "It was all dependent upon whether Cameron Diaz wanted to wear it.

"She did. She loved it. You can see it in the photo. She looks so happy and comfortable, which I liked. And Ms. Wintour wrote a very generous editorial on us."

In her editor's note in that issue, Wintour declared that of all the clothing Diaz modeled, "the neat pair of checked shorts from the charitably minded fashion company Goods of Conscience [is] my personal favorite."

Sales - which ran around 350 pieces a year - spiked. In two years, the company has earned tens of thousands of dollars. Another major star has chosen to wear the comfortable yet elegant clothes in her next movie, the priest hints.

Designer Tory Burch is another O'Connor fan. "I will support anything Father O'Connor does," Burch says. On Dec. 10, Burch's staff will hold a Christmas party and give gifts to all the kindergartners in Holy Family School, which, despite having non-donating multimillionaire Jennifer Lopez as an alumnus, struggle to pay the tuition.

If you're picturing multicolored serapes, re-envision.

At a show at the Greg Lord Studio on W. 26 St., the other night where Swift Technique played, fashionistas sporting $300 shades raved about a cowlneck blouse that reverses to a bateau; khaki trousers draped like gabardine with a peekaboo of tattersal; a man's deep blue shirt with indigo and the very cool "Bronx Blazer," with lapels that snap over the throat.

O'Connor isn't doing all this to compete with Marc Jacobs. The nonprofit Goods of Conscience is creating jobs in the Bronx, funding domestic violence projects in the parish, and helping cure desperate poverty in Guatemala, where the 48-year-old priest was stationed on a religious retreat. "There is 80% malnutrition among the Indian communities of Guatemala, the worst in the northern hemisphere, even worse than Haiti," O'Connor says. "A lot of people wonder, how can I help the poor? People wearing these clothes, they're helping, but not in a condescending way. They're glorying in the workmanship. And the craftsmen and women are earning a living."