RIP Davey Jones... Another Little Piece of My Heart 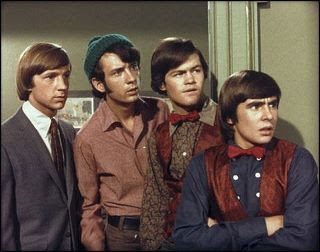 I'm going to try to put this in context so that those of you that only know the last 20 years on this earth, will understand the import: When I was a kid, there was no internet, no extensive radio network, nothing "digital," or MP3. Those were things of "Star Trek," or a Science Fiction that those of us with imagination could conceive of perhaps, but probably didn't ever think would ever really be. Can you imagine, a flip top talking devise you could hold in your hand. Yeah, that'll happen.

As you can imagine, growing up in that time, my musical associations in Texas were rather limited. Relegated to Sunday church and whatever I could find using my own devises.

My first love though had to be Elvis… me and so many others right?

My Aunt Lana always liked him too, (but I didn't know that until later.) I discovered Elvis by watching the mid-night movie, totally enjoying every moment Elvis was on screen when I was 7 years old.

The movies didn't seem silly to me. They still don't. I love 'em. (And years later, when I found Elvis's boat from "Blue Hawaii" for sale in a marina in Los Angeles, it was such a hoot to sit on it and think, "yeah, this is cool.")

It was a monumental day, flashing back to being a kid, when I found a whole stack of Elvis LP's in the big stereo in the living room--you know, the ones as big as a buffet table--and listened to them all. I remember how I loved his version of "Crying in the Chapel, " "Hound Dog," "All Shook up" ( l learned to play that one on the piano later.)

Now, I was a chubby kid. Southern food and all. Very shy. I spent a great deal of my time reading books, writing, drawing and watching old movies. One of my incentives when I decided to lose weight was my Mom saying if I reached a certain goal she'd buy me a 2 album set of Elvis's greatest hits! I met my goal. And it was terribly exciting when the LP's arrived in the mail, COD. (That means "collect on delivery")

Yeah, I loved Elvis. I was still a kid when he died. I had made a "Mississippi Mud Pie," and was at a church picnic when I heard. I cried. I didn't really understand that he wasn't the same as the guy on TV any more. You know, the one in the black leather suit, singing in the "comeback" special.

I sent a sympathy card to Graceland, and his Uncle Vernon wrote me back.

Later my musical horizons widened a bit. But, still confined to what my brothers had on 8-Track tapes, LP's or what I could find on the transistor radio.

One day I stumbled across "Yellow Brick Road" on the static filled transistor and have loved Elton John ever since, and when I found Three Dog Night's "Jeramiah Was a Bullfrog" on a scratchy 45, and Hank Willaims' "Jambalaya" on an even scratchier 78, from that old stereo drawer, I played them over and over again. I got my first taste of something called "rock" with Led Zepplin via my brothers, and I liked that too. (I adored "Jeremiah" actually come to think of it. My Southern Baptist Mom use to sing it sometimes with me, and that was really funny, and would make me giddy. I don't' think we listened much to the words.)

I really was put on my ear though, when I found a 45 with a green apple on it, by a group called The Beatles. The track was "Hey Jude."

Which brings me around to the Monkees. I never discount how much I liked the Monkees when I was young.

We had three TV stations, and "The Monkees" was way into reruns by the time I was rushing home from school every day and watching afternoon TV. Most often it would consist of Godzilla movies, "Gilligan's Island," "The Brady Bunch," "Hogan's Heroes," and "The Monkees."

I loved the humor, loved the hijinks, and loved the music. It became an every day thing to have my tape recorder handy (it was huge, probably out 6x8, not a small one), and record the songs at the end of each show. It was easy to figure out when the songs were about to start. They telegraphed that a mile away. LOL Before long, I had my own homemade Monkee's Greatest Hits.

"I'm a Believer," "Daydream Believer," "Valerie," "Last Train to Clarksville,"... great Neil Diamond, Carol King, Neil Sedaka songs in there, done as only the Monkees could.

I'm sure that homemade tape is still in my bedroom somewhere at my Mom's house. And I listened to it almost every day. And danced around the room like a jumping bean.

I'm not sure I had a favorite Monkee. Davey was cute, no doubt.And so charming on that guest appearance on "The Brady Bunch" when he took Marsha to the prom! I tended to like the shy, silent types too though, so I always liked Mike as well. I was too young to think about it much more than that, but I knew I liked the chemistry of the group and their music always made me smile.

Later, I got into Steppenwolf, BTO, The Tubes, more Elton John, rock, and of course "The Beatles." "Abbey Road" was on my tape player every day on the way to school.
I have always loved "discovering" music … and isn't it so much easier now. I'm very much into Salsa music and the sexy strains of albums like "The Buena Vista Social Club." I love to dance Salsa too. See… still jumping around the house.

But one of my first and still enduring musical loves where those groups I discovered as a kid.

Later on in life, working production in LA and now attending many public appearances for signings, I have met two of the Monkees. Would have probably met Davey this year… I don't ask for autogrpahs since many times I'm working with these folks in a professional capactiy, and I always refrained from saying "Hey, I watched you when I was a kid." I'm sure they get that a lot afterall. I wonder if it bothers them? If they get tired of hearing it?

It's hard to know what to say to someone that affected you though anyway, in any genre, isn't it--influenced your tastes, gave you joy, brings back scenes of your own life when you hear a certain song... words sound hollow...never really carrying the import that something...mattered...in some substantial way.

So….Not like he'll know it or anything...but I'll say it now since I won't have the chance: Thank you Davey Jones, for being a part of the soundtrack of my life. It was, and is, important to me.

Davy Jones, who gained fame as a member of the music group The Monkees and star of the TV show for which they were created, passed away Wednesday, February 29, 2012 from a heart attack at age 66.

Teamed with fellow actor Mickey Dolenz and musicians Peter Tork and Michael Nesmith, Jones and his band mates managed to transcend the pre-fab circumstances which brought them together and develop a genuine following that lasted decades. In various forms they reunited over the years and toured extensively.

“David Thomas Jones was born on Dec. 30, 1945, in Manchester, England. A child actor, he appeared on Coronation Street, the British soap opera that went on the air in 1960 and is still running, and in the police drama Z Cars. After his mother’s death when he was a teenager, he abandoned acting. Slight of build — he stood not much more than 5 feet tall in his prime — he began to train as a jockey,” The New York Times reported. “Lured back into the theater a few years later, he played the Artful Dodger in the West End musical “Oliver!” When the production moved to Broadway in 1963, he reprised the role (billed as David Jones), earning a Tony nomination as best featured actor in a musical.”

“Jones rocketed to stardom in the 1960s as a member of The Monkees, a made-for-TV rock band patterned after the Beatles. Though the television show lasted just two years and the group ultimately broke up, they have endured with such chart-topping hits as ‘I'm a Believer’ and ‘Daydream Believer,’” CBS reported.
Posted by Eva Ink Artist Group at 9:09 PM