It's a Done Deal for Disney! 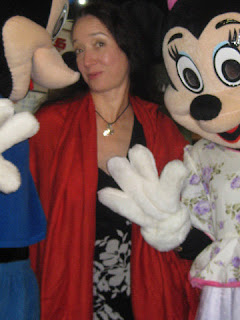 I for one think this is pretty exciting news. Below is the blurb from Diamond's current newsletter. (Above, Mickey and Minnie share the news at my Comics and Animation forum in China!)
--Renee
:-)

This just in--Marvel Entertainment’s shareholders approved the company's acquisition by The Walt Disney Company on December 31, 2009 as expected. The $4.3 billion acquisition gives Disney control of Marvel’s more than 5,000 characters.

While most of the characters counted in that tally range from obscure to, well, very obscure, a select handful have been the basis for blockbuster movies, cartoons and video games in recent years. Additionally, Disney believes that if they find even a few money-makers among the second, third and fourth tier, the deal could well end up being a steal.
Posted by Eva Ink Artist Group at 12:57 PM