Why I eat Black-Eyed Peas for New Year's? --and the history of the tradition! 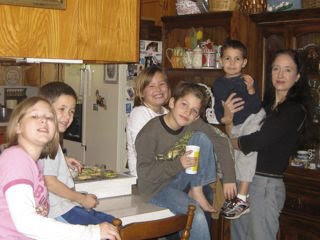 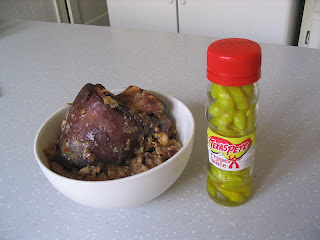 As long as I can remember, Mom insisted that we MUST eat Black-eyed peas, collard greens, onion and chow chow relish on New Year's day...along with some homemade cornbread, of course. NOT that she had to twist our arms. We loved the stuff, topped off with a heap of my Maw Maw's aromatic pepper sauce!

The reason, according to Mom, and my much missed Maw Maw was that it would bring us prosperity in the New Year. Mom would say "The more peas you eat, the more money you'll have in the New Year."

I don't know....there have been plenty of years that I filled my gut with black-eyed peas and that translated into stomach upset more than into prosperity! LOL ... But what I DO have is plenty of memories-- of Mom soaking the peas overnight, adding all the ingredients necessary to complete our yearly ritual, and the SMELL! The smell of simmering black-eyed peas and spices filling the whole house, the taste of real butter on hot, coarse-ground cornbread...and most of all... ALL of us-- my brothers Ray and Robbie, my Mom, my Dad, all taking our usual seats around our little dinner nook--four chairs wrapping around a central bar, connected to the kitchen, giving us a vantage point to watch Mom as she got everything ready. Her seat was the tall bar stool near the stove, where she sat watching us continue a tradition of chowing-down frenzy that no doubt she'd done every New Year's as a child.

These days stand out as staccatos in my memory...the days when, for a brief time, the stores were closed, the streets were quiet, and everyone, you knew, was safe. And time stood still.

I know why these days were important for my Mom...she was a career woman. Worked outside the home her whole life. Was a high ranking manager at Sears, efficiently working her way up from a shop girl at Newberry's to overseeing the employees at the local Sears store. To this day, she still has people come up to her and say. "Thank you. Thank you for believing in me and giving me job." I've always been so proud of her. She doesn't consider herself a great cook, but what I think she's always enjoyed most about those times of cooking for the family was that for her--since she couldn't always be there-- it was a way of connecting and showing her love--singular times within our four walls. She still enjoys cooking Christmas dinner for as many folks as will come...in fact, I think she is most happy when there are children and family in the house. I wish her much more of that.

The passage of time happens so quickly, doesn't it...Dad is gone now. Maw Maw too... Some of us (including me) are dispersed, or too caught up in the every day of life to consider these simple things.... how a repeated little ritual can come to mean SO much more than it's parts...

For me, the simmering of New Year's peas and co-mingled aromas trigger images, sounds, smells and..Voila... my Dad is here again and none of us are so gray or half as cantankerous (oh wait, maybe we always were. LOL). Times are not so hurried. We stopped.

I close my eyes and the time traveling always brings a smile...

As my nephew's lovely wife Elodia said about one of our group Christmas pictures of our little gaggle of young-uns, "This is the type of picture that you look at and it melts your heart 5, 10 year's from now." Funny, but smells too, have always painted those pictures for me in my mind as surely as a camera.

Over the year's I see my tradition's falling away... We all used to gather on Christmas eve and open presents--first at Maw Maw's then Mom's then Aunt Lana's, later it was shuffled to Christmas Day. Now it's a miracle if we are all in the same room together at any given point in time to say hello. Sunday meant the whole family converged on Maw Maw's house (you did NOT say no) and then my Mom and Dad's house for Sunday dinner after church....often that meaning a fish-fry of catfish or perch that Daddy had caught and scaled himself (he loved the invention of the fillet knife!), while Mom made the hush-puppies. Easter meant that all the kids were in ONE place hunting eggs. No excuses. And those too old to hunt did the hiding. I always remember when I was really young, my cousin Johnnie doing those honors. He hid 'em good too. :-) These things don't seem to happen any more....everyone together...I guess it's the normal passage of time(?)...something I have NEVER liked, to tell you the truth.

So, for me, I will continue my own little tradition...like my Mom...like her Mom before her...THAT I can do. We can always pay tribute to our roots, can't we? It's what makes us who we are.

So, YES. On my stove for New Years you will always find the bubbling pot of Black-Eyed peas. The cornbread in the oven. Hot sauce at the ready... The little symbols meaning more than their parts.

I wouldn't have it any other way.

The "good luck" traditions of eating black eyed peas at Rosh Hashana, the Jewish New Year, are recorded in the Babylonian Talmud (compiled ~500 CE), Horayot 12A: "Abaye [d. 339 CE] said, now that you have established that good-luck symbols avail, you should make it a habit to see Qara (bottle gourd), Rubiya (black-eyed peas, Arabic Lubiya), Kartei (leeks), Silka (either beets or spinach), and Tamrei (dates) on your table on the New Year." However, the custom may have resulted from an early mistranslation of the Aramaic word rubiya (fenugreek).

A parallel text in Kritot 5B states that one should eat these symbols of good luck. The accepted custom (Shulhan Aruh Orah Hayim 583:1, 16th century, the standard code of Jewish law and practice) is to eat the symbols. This custom is followed by Sephardi and Israeli Jews to this day.

In the United States, the first Sephardi Jews arrived in Georgia in the 1730s and have lived there continuously since. The Jewish practice was apparently adopted by non-Jews around the time of the American Civil War.

In the Southern United States, the peas are typically cooked with a pork product for flavoring (such as bacon, ham bones, fatback, or hog jowl), diced onion, and served with a hot chili sauce or a pepper-flavored vinegar.

These "good luck" traditions supposedly date back to the Civil War, when Union troops, especially in areas targeted by General William Tecumseh Sherman, typically stripped the countryside of all stored food, crops, and livestock, and destroyed whatever they couldn't carry away. At that time, Northerners considered "field peas" and field corn suitable only for animal fodder, and didn't steal or destroy these humble foods.

(Karah, Benjamin, Ally, Ryan, Randall and I making Sugar Cookies, December 2009, at the dinner nook in my Mom's kitchen in Texas. The site of many a plate of Black-eyed Peas in the past!)

(Black-Eyed peas with ham hocks, and side order of Texas Pete, o' course.)
Posted by Eva Ink Artist Group at 9:14 AM