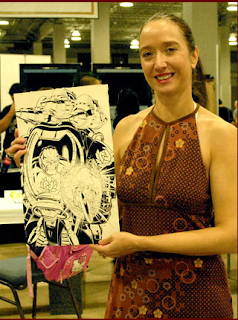 Hi Kids-- While I was at the wonderful Wizard Miami last week, I met a gentleman at the show who has a pretty cool blog pertaining to everything robotic. Micronauts, Rom, ExoSquad, you name it.

I was the editor of the short-lived ExoSquad at Topps Comics, which produced some fantastic Michael Golden covers--two of which were sadly never printed-- as a comic cover anyway.

But, nostalgia reigns supreme, and apparently, this comic has a cult following! Who knew!


My part of the interview begins around the 16 minute mark after the interviewer, Steve De Anda, does his intro.

If you are into all things robotic, this may be of interest to you. I also talk about other things. :-) As Steve says:


"The 24th seal of the Roboplastic Apocalypse is pulverized instantly like a Tyrannosaurus getting kicked in the face by Jackie Chan when special guest Renee Witterstaetter demolishes the Kingdom Roboplastico! Join me my fellow Macrocranians as I talk to this prolific writer, author, colorist and editor about her career spanning multiple artistic disciplines and numerous roles within and beyond the comic book industry. Thrill to stories from behind the scenes at Topps Comics during the production of the ill-fated ExoSquad book and other fascinating tales like why the powers that be at Marvel weren't interested in doing a Jurassic Park movie adaptation. It's all here and more in this THE ONLY CELEBRATION OF EXOSQUAD'S 18TH ANNIVERSARY WE'RE GONNA GET edition of the Podcastalypse!"


Thanks to Steve for the great conversation!

(Image: Unpublished original ExoSquad cover. For sale in my gallery on Comicartfans.com)
Posted by Eva Ink Artist Group at 7:47 AM