The Magic that IS MegaCon starts Friday--Artist Michael Golden Conjures Badge for the Event! 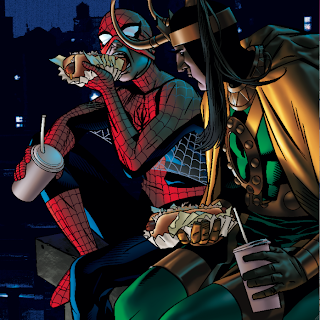 Orlando-- Disney and Universal will still be there on Monday, but the magic that is MegaCon, comes together like a spellbinding oasis for only three beautiful days a year. And it's starting this Friday!

In addition, artist Michael Golden will also be making a return to MegaCon after several years, and is looking forward to the experience himself. "I always feel this family run show combines the best of pop culture with a large focus on comics and illustrators" he said. "A well orchestrated mix. That continues to grow every year. They are doing it right."

Adding to that mix this year will be Golden's own artwork that will be featured on badges for guests, special groups and retailers at the show. The piece features Loki and Spidey, but with the volume of Golden iconic pieces out there, it was hard to focus on just one.

Michael is renowned for his ground breaking art and storytelling on such books as "Doctor Strange," G.I. Joe," "The 'Nam," "Avengers," "Bucky O'Hare" "Spartan X" and far too much to mention in a short press release.

His class on storytelling is sought after by universities and colleges worldwide, while his artwork has recently been exhibited in places as diverse as New York, Barcelona, China, Antwerp and Gijon, with Lifetime Achievement Awards from the Lille Festival and the University of Maryland Eastern Shore.

Michael Golden and Steve Scott are scheduled for panels throughout the weekend. In addition, the artists will be at the event all three days in artist alley with writer Renee Witterstaetter, signing books, sketching and offering show exclusive prints and books. Including Michael's sketchbook "Michael Golden: MORE Heroes and Villains," and Renee's new children's book "Kerry and the Scary Things."

So get in on the magic while the conjuring is in full swing for these three unique and wonderful days!

For more information on Michael Golden and his work, go to: www.evainkartistgroup.com
Posted by Eva Ink Artist Group at 7:33 PM