Finding the Big Easy in the Big Apple, and a remembrance of New Orleans past.... 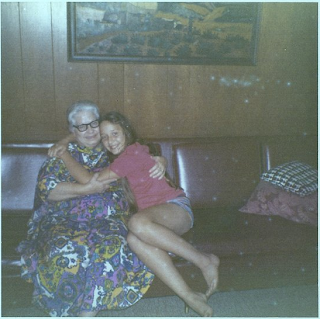 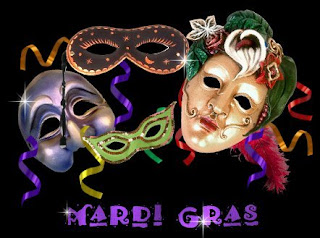 Hi Ya'll-- As a kid, I spent all my summers in New Orleans with my Aunt Margaret-- the best Cajun and Creole cook that ever lived. I attest to the fact of my remembrances of etouffee, jambalaya, gumbo and piles of crawfish spread out on newspaper on the dinning room table.

It was fantastic! I think I gained 5 pounds every summer.

It's funny how fragments of our times there stick in my head--Ray being caught with a fishhook, someone being sunburned pretty badly...was that Ray too! The crescent shaped scar I have from roux splattering, the crabs jumping out of the boiling pot, the solider on the steps of some attraction in Biloxi telling my Mom how pretty she was, and me wanting to chase him away, LOL...

It all comes to mind.

The picture in my head of Aunt Margaret right now though, of her particularly, is of her standing in the kitchen over the stove, all the ingredients neatly chopped and ready to go, a bright orange GIGANTIC Creuset cooking pot before her--the only type she used-- stirring the roux for the gumbo until it was just the right golden brown, all the while talking in her throaty voice and letting out, every now and then, a laugh that shook her belly and filled the kitchen with something I can only describe as pure joy.

I loved that woman.

She was the first to explain "female things" to me in some understandable way, and the first to hand me a Mason Pearson. "Never Skimp on a hairbrush," she'd say.

And I never have.

In truth, Aunt Margaret, was a force of nature walking around the house in a dizzy array of kaleidoscopic mumu's, billowing behind her confident stride, and I can still hear her voice the way she said my name with a amalgam of an accent that resonated Boston, Texas and New Orleans all at the same time-- she'd lived many places and seen many things before settling down with Uncle Al-- a through and through Cajun and ex-policeman in New Orleans-- and learning how to make a proper oyster po-boy.

"Ya gotta stop being wild sometime," she once told me about deciding to get married, "And I knew nobody was going to treat me better than your Uncle Al."

Funny though, a painting she had of a dancing girl, torso up, full cleavage and a mischievous smile is always one of the things I remember being in her home, even after she moved to Beaumont years later before her death. And I knew there was a story there. Perhaps one she never told, but oft hinted at. A gift, perhaps?

A gift...material ones have a meaning only as long as the person alive remembers it, perhaps. But the shadows are still there.

I guess that's why I'm writing this. To flesh out my shadows.

Right before she left, only a few months after my Dad, Aunt Margaret gave me a beautiful Victorian couch with green velvet cushions bought from an antique shop in the French Quarter a lifetime ago. I always feel like it harbors secrets and stories from it's 200 year plus history that it wants to tell, but doesn't know how. But I listen anyway. It sits now with two silver chairs and a painting of the Louisiana swamps, and I cherish them all.

Before she died, I was visiting Aunt Margaret one last time. She made my brother Ray and I a huge pot of Gumbo again in the bright orange Creuset pot. For her, good food= love, and I can't deny I think the same thing. "Don't' use anything else but this pot," she'd say. "It won't taste the same." And she was right. It never does.

After dinner, she showed me a gown that she planned to be buried in someday. Still in the box, wrapped in tissue paper.

"I'm saving it for that special occasion she said. It's too pretty to just wear all the time. And that's what I told your Uncle Al when he gave it to me" she matter-of-factly-explained. "I can't see myself in some pantsuit in the casket, anyway. Just not me." She was a character and unique until the end.

That was Aunt Margaret, though, and her attitude about death so New Orleans, which has always been a place embracing both sides of the fence all at the same time, anyway. The very above ground cemeteries with the family crypts, places not to mourn, but to celebrate, the past, present, future and bloodlines. The streets of the place, they say, even teeming with spirits (no doubt shaking their heads at our modern day Mardi Gras shenanigans.)

And yes, she was buried in the pink lacy gown.

But I never really think of her being gone.

I remember all of this when I think of Mardi Gras....it was part of my fabric even before I knew what it even was, I guess. Not the drinking and bawdiness of Bourbon Street. I don't give a hoot about that. Something else though. A sense of place.

Aunt Margaret often gave me Mardi Gras parade medallions and beads that had been thrown from the floats, and regale me with stories of the krews and the costumes and the parades and the politics.... I loved having those colorful mementos and always put them in my little box of treasures--things I collected that made me smile--when I got home to Texas.

I'd pull out that box on rainy days, and take each thing out and inspect it closely, I don't know, looking for WHAT, exactly, but they were my cigar box object d'art. And I remember the history of each little thing from the little colored parade discs to the razorback that Uncle Arthur carved out of a peach pit.

Years later, when living in NYC, my friends and I decided to pile into a car and drive non-stop to New Orleans to experience Mardi Gras for ourselves. It would be my first time-- after all those years of summering in Louisiana--all those times of making the 10 hour drive with my Dad, Mom and two brothers, didn't make a road trip seem that alien. All those times of studying the various medallions and wondering what it was all about.

And, why, miracle of miracles, my friends and I even found a whole Victorian house to rent in the Garden District. What luck?!

So we did it too-- Driving for 24 hours straight. I think there were 5 of us.

(I'm still kinda that way actually. And happy for it. I'd have missed some wonderful things if not.)

Now I know from experience: New Orleans is a CRAZY place for Mardi Gras, especially if you are on Bourbon Street. I think someone threw a lighted cigarette down my shirt from one of the balconies if I remember correctly. BUT, If you want it a little calmer, you can have a wonderfully good time staying off that main drag and hitting places like the Gumbo Shop and any place with live Zydeco music. We love dancing to the Zydeco music!

And a side note.... my favorite time to be in New Orleans is actually for Halloween. Wonderful parades without the madness. High energy without too many way too far in-their-cups. The pet parade is an absolute hoot!

But there are two things that Mardi Gras ALWAYS brings to mind for me, in addition to my always remembering...and missing....:

So, I'm gonna look for both in NYC. And I'll help you too!

As my own little public service announcement, here are some places to celebrate Mardi Gras in the Big Apple, since we can't be in the Big Easy today. (In the past I've gone to a place named Philip Marie, where my friend's band had a gig every year. Due to budgeting cuts, that isn't happening this year. Darn it!) But, never fear.

Plenty of great places to go:


Feel free to share this with your friends to help you plan your Mardi Gras festivities.

So, whatever you do, have a great Phat Fat Tuesday, ya'll.

This day, as on many days, but especially this, I have a bit of my Aunt Margaret in me. And I don't know anything more important to say about a person than that.