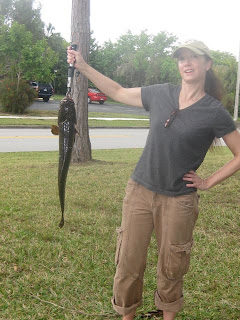 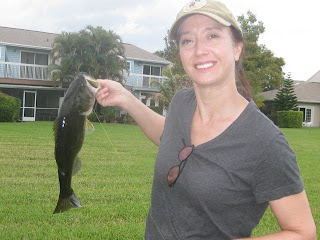 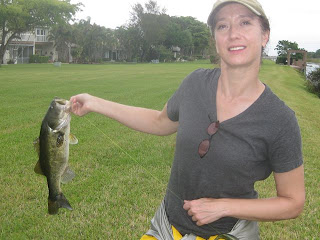 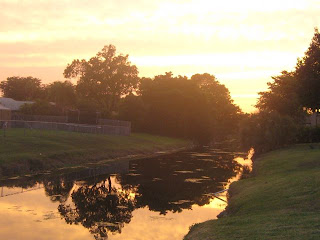 Well, being the avid anglers that we are, from the moment we first saw the episode of "River Monsters" and fishing in the Florida canals, it's been on the list of "things to do."

Wizard World Miami, gave the perfect opportunity and excuse for a little fishing R n' R, and directly after the show, the next stop was Lauderdale-by-the-Sea... and you guessed it-- prime Snakehead fishing territory.

All of Broward County is known for the evasive species. And opinions are mixed. Some say they are killing the native fish and competing for food, others say they have very little impact on the environment.

There doesn't seem to be any debate however on one fact: They are excellent eating!

That's why they are in this part of Florida to begin with. Apparently some enterprising folks had some corralled in the C-14 Canal to raise as food. Hurricane Andrew came along and set 'em free, and before you knew it, the C-14 and all canals connected to it have been pioneered by Snakeheads.

Another undeniable fact: They are excellent fighting fish when hooked.

It was that appeal that had us looking for these monster fish. What we didn't realize is just how hard they are to catch, especially during spawning season, which sadly, we happened to hit.

Several days were spent walking up and down swampy mucky, canals, traversing behind folks houses, navigating through tall weeds, jumping over duck poop, not to mention the noisy critters themselves. Cast after cast we looked for the elusive Snakehead, but to no avail....

What could be wrong? We were in the right place. Using the right bait--plastic frogs. And even though spawning, they do still bite this time of year. :-/

Where was the fish of legend with the body of reptile (thus the name) and razor sharp teeth!

It was time to call in an expert, and after a bit of research on line, I found Captain Shane, who explained EVERYTHING we were doing wrong!

First of all, Snakeheads live RIGHT along the shore. I mean RIGHT there. They love the muck and the mud and the sawgrass. They burrow into the river banks practically and set up their homes there. Being very territorial, they'll lash out at anything that invades their area.

So, Hint #1: Cast as close to the shore as possible. This leads to many a frog landing on the ground first, but as Captain Shane says, just pop it back into the water. Looks natural that way anyway.

But that's not all. Snakeheads are very skittish fish. If they see you, they'll disappear and you'll never see them again. Darn those fish have good eyesight. Numerous times we accidentally walked up on a few, they see us, and skedaddle.

And, as a side note. If a Snakehed takes your line. Secure that hook quickly. Once it strikes at your bait once. A Snakehead, unlike a bass, will not strike again.

In fact, after 8 hours out with Captain Shane, I felt like I'd run a marathon. Stepping into a pile of fire ants in my sandals didn't help either. But hey, it happens.

This is obstacle course, commando fishing.

All in all at the end of the day, there were Snakeheads to be had. And the rumors are true. They are amazing fighting fish. And just to round things out, a bass or two as well-- on those we did catch and release.

It's illegal they say to throw the Snakesheads back into the canals, but part of me wonders if the Captain didn't just want to take it home for dinner, and if they taste that good, who can blame him. :-) His wife called several times just to see if we'd caught anything, LOL.

So, that's my Florida fishing report. Now that I know the secrets of catching the elusive Snakehead, I'll be back again.

At one point, I had three gigantic Snakeheads on my line. One SO large it snapped the line and took the bait... yeah... I'll be back.

Besides, the sunsets are beautiful.