A Word About the HeroesCon Art Auction-- This Weekend! 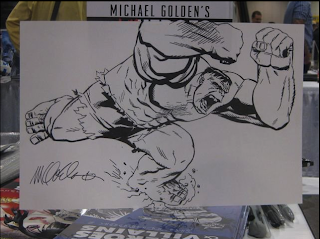 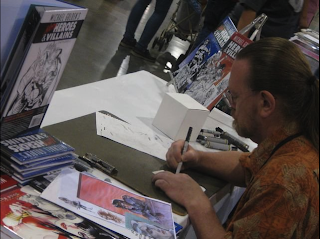 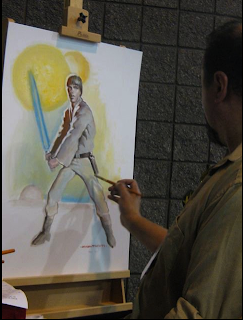 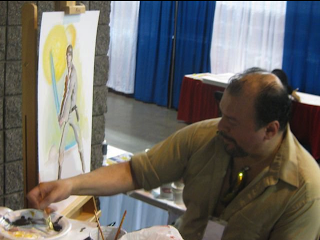 Hi Ya'll-- I'm gonna throw my two cents out there to put in a word about the upcoming HeroesCon, run by our friend Shelton Drum. Shelton also owns one of the best comic shops we've ever been in, Heroes Aren't Hard to Find, in Charlotte as well.

This is certainly one of our favorite shows, and fate willing, we never miss it. This year, I'll be there with Michael Golden and Mark Texeira. Other friends of ours will be in attendance as well! Yeah! And I have to say, it's one of the most purely comic and comic art shows still alive today.

To help this great show's bottom line, many of the artists in attendance donate art to the con's auction. These funds go to helping bring the creators you want to see, back every year.

As a result, you art collectors out there can snag some incredible deals on one of a kind pieces. I know that both Golden and Texeira will be contributing this year. I'll also put some of my new books in the auction as well.

While I'm at it, let me mention that I'll also be debuting my new book "Nick Cardy: The Artist at War," at this convention, and Nick Cardy himself will be in attendance! There is also a panel scheduled on Friday night to talk about Nick and his careeer. More on that in my next press release.

In the meantime, below is Allison Sohn's shout out to all you artistic types. And for you collector's out there, this event is not to be missed!

A SPECIAL MESSAGE FROM ALLISON SOHN

…and Yes, I said Legends. You know who you are. But just in case you don't know who I am, I'll take a moment to introduce myself. My name is Allison Sohn and I have run the HeroesCon art auction on behalf of Shelton Drum for the last few years. Many of you may know me better as Adam Hughes' wife, or that bossy redhead that runs Adam's table at conventions.

I'm dropping you this email today regarding the upcoming HeroesCon art auction. Many of you have attended before, so you know the drill. However, for some of you, this may be your first time attending HeroesCon -- or maybe it's just your first time in 10 years. Either way, I thought it would be helpful to everyone if I sent out this letter.

The HeroesCon art auction is held on Saturday night, in one of the Westin's ballrooms. Last year the auctions as attended by approximately 800 people. It has become a must-see event for fans and professionals alike, and the biggest party of the show! But it wouldn't happen if not for the donations of artists like us. I'm emailing today to ask those that may not know, and remind those that do, for a donation of a piece of original artwork for our auction. Donations can be done from home, done at your table while fans admire your work, or done on one of the several stages HeroesCon will have set up for artists to work on. There will be an assortment of art supplies on hand for everyone to use, or you can bring your own. You can see photos of many of the guests painting on stage, as well as pictures of last year's auction in HeroesOnline's own flickr account, found here:

Many people ask what the auction's proceeds benefit. The short answer is "Us". The proceeds from the auction help to pay for invitedartists’ travel and accommodations for the event, while allowing HeroesCon to keep their ticket prices some of the lowest on the convention circuit. Art donations frequently transform an “attending professional” to an “invited guest.” The more money raised in the auction, the bigger the budget is for next year’s show. For those that weren't aware, a three day pass for the show is only $30, and children under the age of 12 get in for free. Prices this affordable allow whole families to attend the show, bringing in a new generation of fans along with the old one. And its all possible due to the donations of original artworks by the attending artists for the art auction.

The art auction has 2 different aspects to it: a Saturday night live auction an all-day Sunday silent auction. I, with the help of a handful of HeroesCon staffers, divide the art donations into the two groups. The truth of that matter is, we get so many donations it is impossible to include everything in the Saturday night event. We will often choose smaller sized pieces that might be difficult to see at the live auction, donated prints, and art that arrives too late for Saturday night's event for the Sunday afternoon one. We will also save several of what we'd call the "premium" pieces for Sunday, so that fans are drawn to the silent auction as much as they are the live one. Either way, a piece of art in the auction serves as a nice promo for the contributing artists and sometimes, especially with really dynamic pieces, brings fans and pros alike to your artist alley table to buy commissions.

I think that about covers it; what the HeroesCon art auction is, and what you can do to help make it a success. I look forward to seeing you all in Charlotte in a few short weeks, and to personally auctioning off your donations!