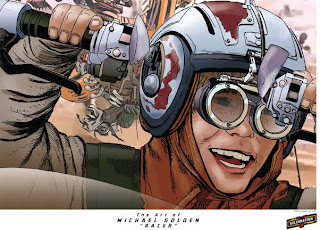 The Making of a print!

While traveling in Europe last year with one of my artists, Michael Golden, we were amused and bewildered to discover that Michael has his own cult.

We were staying at a lovely little boutique hotel that I frequent in Paris, near the Seine and Notre Dame, and not too far from my friend's comic shop, where Michael was making an appearance, when one morning we received a call on the lobby phone in the breakfast room while having croissants and fresh squeezed orange juice (which miraculously appeared out of this clever device that looked like a tennis ball pitching machine).

The 'bling' 'bling' from the black block with the rotary dial seemed to pierce the otherwise quiet scene I was gazing at -- cobblestone streets drenched with a morning mist, a man walking with a gross of bread from the boulangerie down the street, each crusty bite destined for a sip of wine and piece of cheese...all the patrons with couched unsaid looks, curious as to what could possibly be so urgent at this time of the morning?

A voice mysteriously crackled across the line... "Is this Michael Golden."

And Michael's reply as always "Why? Does he owe you money?"

Of course, as one knows, humor does not always translate. Michael quickly replied "Yes." And we found out that our caller was a reporter with one of the Paris newspapers, and he humbly wanted to do an interview with the visiting artist, Mr. Golden.

As the agent, Michael handed the phone to me, I stopped peeling my croissant (I have this weird thing I do of peeling it off in layers, you see), and within hours a dapper little man--seemingly a bit nervous--and his film crew showed up in our eclectic inn's waiting room.

Pleasantries were exchanged, introductions made, cafe au lait ordered, and the interview commenced.

Up until this time, the rather curt lady who ran our B n' B, mostly typing with a frenzy in a corner by a wine vault cul de sac, really didn't pay us much mind: Just more American tourists, BOTH with pony-tails, perusing the guide books and maps at breakfast each morning before heading out on some adventure, which may have seemed blase to her by this point.

I remember that one of the guests mentioned that they were going to take the "DaVinci Code Tour" of Paris, and her disdain was so evident, I think I felt the wave of the whiplash way over in my corner nook. Middle-aged with short blonde-ish hair and ample endowments, I remember how her bosom rose and fell with her intake and outtake of air as if to emphasis her point, while her sculpted hair remained completely in place.... My point being, she did her job, shall we say... with the warmth of a sea captain on a slave ship.

I think her name was Nicole.

Anyway.... Nicole seemed mesmerised once the reporters appeared, and lavished us with attention. I quickly summed up her type and made a note of it: Dab of the "wanna be actress" dramatics in her. Good to know for future reference. But, in this case it did get our cafe au lait and vin rouge to us very quickly without the usual wait, as she listened in on the conversation.

And I found it pretty interesting as well.

One really could not have picked a better spot to be talking about art. The cozy reception room of the hotel, centuries old wooden beams overhead, was nailed floor to ceiling with original little paintings, some framed in gilded wood, crackled and dark with age, others simply mounted on a wood form, frayed around the edges, and precariously slanting on rusty hooks. Where there was space in between, little ancient objects, their uses long forgotten in time, dotted the wall.

I noticed a few such ceramic bowls with notches cut out on one side and pastoral scenes painted in the crater centers, and wondered the reason for their invention. I was pleased to figure it out myself when I saw one with-- instead of horses or flowers--scissors and a comb of all things, as it's decoration.

The now attentive Nicole confirmed my guess that they were for the tonsorial profession. i.e. shaving bowls.

Anyway, there's an interview going on! I have to pay attention!

Our reporter, dressed oddly like Columbo, had a long list of things to ask the artist, and with the morning free, we were happy to oblige. There's nothing more lovely than sitting near the Seine, drinking coffee, and hearing the bells of Notre Dame, after all.

But, as the interview progressed, Michael and I were both rather stunned when the bulk of the questions seemed to be about one issue of Star Wars that Michael drew, Issue #38.

Why? Golden's done so much work other than that one comic. Doesn't he want to talk about anything else?

Doing his best to be well-rounded, Golden would try to steer the conversation on to current projects, current art books, the current signing tour, even. But again! The reporter seemed to really want to know every nuance of this Star Wars thing!

True, it is a great story. Luke and Leia trapped on a living space ship. A stand alone story that caught the imagination. An iconic cover that is immediately recognizable. But...

"Why all the interest in Star Wars #38," Golden finally asked in his usual direct way.

Our Columbo then proceeded to explain that not only is "Star Wars #38" one of the most popular single issues of a comic in France. But, there is a whole CULT built around it, it seems! Fan clubs, re-enactments, costume clubs, merchandise frenzies no doubt etc. etc. Apparently, except to me AND the artist who drew it, this is widely known.

And Michael continued the interview, trying to remember everything about the issue and it's creation that he could, in order to please our patient visitor.

In the end, the interview turned out marvelously--- see one never knows what may happen when one picks up the phone-- and I have to say that our service at the hotel was amazing after that as well. Nicole was our best friend, and I've seen her on numerous visits since. (Although that didn't stop the maid from accidentally throwing out a whole folder of drawings, thinking they were trash... but that's another story.)

So, long story longer, it seemed like a perfect fit this year, when Golden was accepted to take part in Star Wars Celebration 5 in Orlando, Florida. And was also picked as one of only 40 artists to do limited edition prints for the show.

Michael choose to do a piece of Aniken on the space scooter (and forgive me if I'm not getting the terminology correct). He wanted to portray the sheer joy of being a kid on such a contraption. Which I think he did very well. I liked the little bit of humor as the villain chasing him has a little mishap (which humbly, was my idea. LOL). The print measures 11x17 on Irish Linen art paper.

As for the Star Wars experience: The whole show itself was amazing as well.

All Star Wars, ALL the time.

My friend Ken even showed up in an unbelievable Darth Vader costume that he fabricated himself. The costumes all around were utterly outstanding. Although they tended to be heavy on the Slave Leia's. But what fun! I have a bit of nostalgia myself having seen the first Star Wars movie as a kid and thinking it was the best thing I'd ever seen in my young life! So, the festive atmosphere was great! George Lucas, Mark Hammill, Carey Fischer, etc. were also on the floor, adding to the energy.

Disappointingly enough though...I did not however, see any mysterious trench coat clad, derby wearing folk about, lurking in the shadows behind blister packs of Obi-Wan and Yoda, pad in hand,as I half expected.