Review: "Nick Cardy: The Artist at War" By Jason Arnold 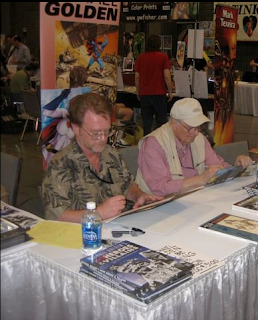 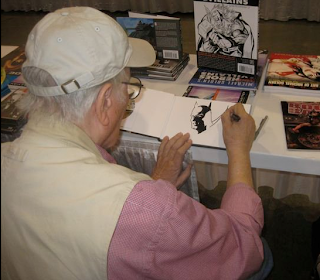 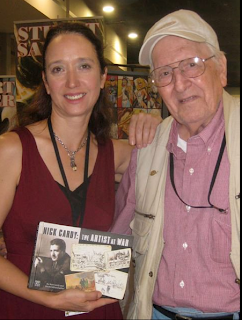 And a store owner tells me what he thinks about our new book, "Nick Cardy: The Artist at War." Thank you Jason!

In these photos as well, Nick Cardy and Michael Golden at Heroes Charlotte, 2011, Nick sketching in the new book, Nick and I with our current project on his war journals.

Right off the bat, I've got to say that it was my pleasure to purchase, read and review Artist at War. You guys did a great job putting it together and I'm all too happy to recommend it here in my shop, Strange Adventures in Fredericton, New Brunswick.

Like many comic fans, I was familiar with the name and a portion of Mr. Cardy's tremendous body of work, but his interview on Where Monsters Dwell was absolutely compelling! So when I learned of the book you were publishing, I just had to have it!

Thanks again to you and everyone involved in compiling Mr. Cardy's work for this beautiful production.

Nick Cardy, like many from his generation, has provided us with plenty to be grateful for. His work in the comics industry has been legendary and an influence on many since its golden age. If the name isn’t ringing bells yet, just check out some of the work he did alongside the likes of Eisner, Schwartz and Infantino, just to namedrop a few. It’s his service in World War II though that is the focus of the highly recommended, wonderfully presented, illustrated autobiographical book “Nick Cardy: the Artist at War”.


A fresh faced, 20 year old Nick Cardy was drafted to serve in the war on April Fools’ Day of 1943 no less. Starting right at basic training, Mr. Cardy deftly and clearly captured many sincere, telling moments from a young man’s experience in the army. His illustrations continued all the way through to the end of the war and a selection of these have been beautifully presented to us by Renee Witterstaetter and Little Eva Ink in a 128 page, full colour hard cover gem. I’m lucky enough to have purchased an edition with an interview disc and autograph from Mr. Cardy himself.


To say Mr. Cardy’s recollections are compelling would be an understatement to say the least. The chosen text for the book and the video interview glued me to my seat. The life he manages to capture in his sketches, drawings and paintings is the kind only described by the thoughtful eye of an illustrator/painter. While the photographer takes a moment to freeze a moment, the contemplation of the pencil, pen and brush (as brief as it might be in such a volatile situation) somehow gives me a greater sense of connection as a human being to the individuals and events surrounding Mr. Cardy in the service.


The images range in mediums, techniques and intensity, but the constant beat of the notepad format (thank you for not cropping!) gives the read a steady rhythm. It’s easy to see an evolving view of a world-scale event through the eyes of an individual, due in no small part I’m sure to the selection and arrangement of the chosen pieces.


All in all, this handsome book is worth the price of entry and then some. The subject was a monumental event that changed the world and the intimacy that “Nick Cardy: the Artist at War” gives it is riveting. It’s an honour to have read it/heard it from the gentleman himself and on the off chance that you are reading this Mr. Cardy, I sincerely thank you.