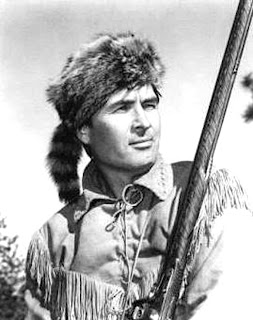 A few years ago I was fortunate enough to spend an evening with Fess, his wife and a group of friends for a small gathering at his winery in Los Olievos, invited by an actress friend of mine at the time.... To hear him sing folk songs and interact with friends while we had wine from his local vintage... it was such a magical night. Not to mention that he was such a grounded and nice person. All you could want from one of your childhood heroes. RIP, Mr. Parker. I will always remember you. Not only as Davey Crockett and Daniel Boone, but as a kind and sincere man.

PS--Below, a few words about the impact of this show, in case you didn't grow up during the frenzy. :-)

The mid fifties television production of Walt Disney's "Davy Crockett" struck a nerve in the physic of American children. This three part TV mini-series launched the "Davy Crockett Craze", a phenomena that swept the Nation for some time.

Davy Crockett collecting cards, coonskin caps, toys, other assorted memorabilia, and the ever popular recording of the "Ballad of Davy Crockett", were only some of the outward signs of it's vast popularity. Actors, Fess Parker, as Davy Crockett, and Buddy Ebson as his sidekick, Georgie Russell became popular with almost most every child in America, practically over night. The show was so successful that the original three part series was clipped together and released to theaters as a full length movie. Then the Disney Studio produced a two part TV sequel the following year.

There is little doubt that by today's standards there was nothing special about it's plot, or dialog, or the acting, etc. Some critics might go as far to say it was rather silly, childish, and a mediocre production at best.

Perhaps that's all true, but it would miss the most important point. Seldom has any TV production cause so many young people to love a couple of screen characters so deeply, and with such spontaneous joy. In this regard it is a Classic and holds a special place in the history of television art.
Posted by Eva Ink Artist Group at 8:48 PM