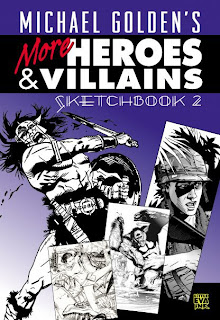 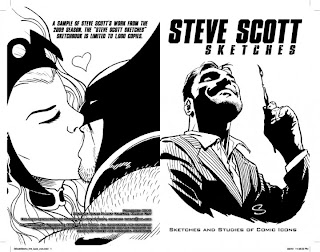 Kansas City-- Finally, the long-awaited and much anticipated, second in a series sketchbook, from artist/creator MICHAEL GOLDEN is NOW available! "Michael Golden: MORE Heroes &Villains," is in the house! And Planet ComiCon, being one of Michael's favorite shows, will be one of the first places where this book is offered!

Now for some bad news....somehow 420 of this already limited volume have disappeared somewhere between the printer in Hong Kong and our warehouse in New England--less than 600 available worldwide!

A follow up to the popular "Heroes & Villains," sketchbook of last year, this new volume is a must have for collectors of Golden's awesome storytelling and spot on illustration. Co-creator of Rogue from the X-Men, Bucky O'Hare, Spartan X, and illustrator on "Dr. Strange," "The 'Nam," "G.I. Joe," "Avengers," "Marvel Fanfare," and much, much more, none of Michael's art in this new book appears in any other art book or sketchbook on the market!

The volume itself is album sized, full color, and 48 pages in length, and features many of Golden's sketches from the 2009 season and some old favorites as well.

MORE good news for you fortunate few: If you do snag one of these books, it will be even more collectible. Be sure to get your order in now, or catch us at PlanetComiCon! Be One of the 600!

Comic artist STEVE SCOTT is debuting his new 32 page sketchbook as well, "Steve Scott Sketches," at PlanetComiCon to celebrate his first time appearing at the show! The book is limited to 1,000 copies, and comes in either signed editions or original sketch editions.

Steve's work can currently be seen on the upcoming "X-Men Forever" series with writer Chris Claremont. Not to mention that Steve is also the ONLY artist tapped by DC Comics to do any work relating to "Batman Forever," depicting the now legendary turn of Heath Ledger as The Joker. Look for Steve's work in the Blue-Ray disc release of the movie!

Steve is indeed certainly no stranger to media tie-in's. His work has also often been seen on the television show Smallville and in other special projects for DC Comics. As well as doing some darn good likenessess for the recent "Indiana Jones--Tomb of the Gods," comic book series for Dark Horse to tie-in with the recent Harrison Ford movie! In fact, George Lucas liked Steve's work so much that he purchased most of the originals to keep for himself!

Recently returned from a signing tour in Belgium, France and the Netherlands, and Spain look for more of Steve's work on "X-Men Forever," "Green Lantern," as well as some surprises to be announced soon!

For more information on Michael Golden and Steve Scott and their work, contact: evaink@aol.com

For more information on PlanetComiCon taking place this next weekend, visit: http://www.planetcomicon.com/

But, be sure to pick up a copy of their new sketchbooks while supplies last!
Posted by Eva Ink Artist Group at 4:47 PM