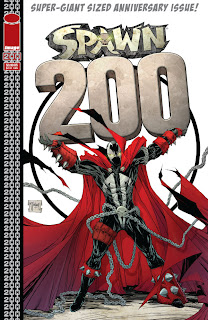 Our friend Richard Boom at Broken Frontier, recently published this great article about the success of "Spawn #200," which features artwork by Michael Golden. In fact, Golden did the layouts for most of the book. In addition to Michael, the rest of the artist line-up is also top-notch.

Congrats to Todd McFarlane on the success of his series, and being one of the only independent comic books to ever reach the 200 mark! I think the world of Todd, and I'm so happy to see this!

It's an issue too large to contain -- and an issue too hot to keep on shelves! Spawn #200, the landmark issue of the top-selling independent comic of all time, has sold out at the distribution level!

Image Comics is rushing comics' best value in years back to the presses. The second printing of SPAWN #200 will be in stores February 9, so mark your calendars if you missed the first printing!

"Obviously, it's great to have any book you create sell out," says creator Todd McFarlane, "but given the high initial orders of the first printing of SPAWN #200, combined with the fact that this is our big bicentennial issue, it only makes the sellout that much more rewarding. I'd like to thank both the fans and the store owners for making this possible."

In this landmark issue, the most ruthless villain in the Spawn universe returns. Can Jim Downing survive a face-to-face confrontation? Downing will battle his most fearsome opponent yet and get answers from an astonishing source, as two fan-favorite characters make a glorious return in this double-sized issue.