How to Survive a Comic Book Convention! By Colin Anderson 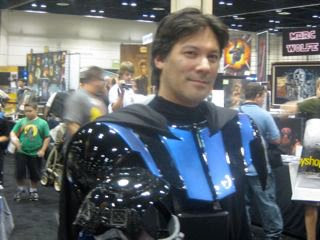 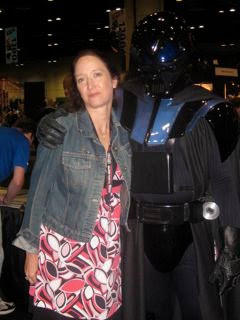 Howdy-- I found this article on Comicbookbin, and it gives some good solid advice on how to get through those rough and tumble conventions-- you know...the ones where it's like salmon swimming up stream! Here's the original link:

You can check out more of Colin's tips and articles there. And, for those of you that say that you spent all of your money by the time you find our tables, well, all I can say is: Come to us first! :-) It's the only way to support the artist and buy sketchbooks or commissions directly from the source!

PS-- That's my friend, Ken, in a Star Wars costume he made himself, and wore around Star Wars Celebration in Florida, even though it was amazingly hot! He did a terrific job on creating this piece from scratch. Wow! And the other pic is Ken sans sweat-box helmet--which was very much a production to remove. (He looks a bit like Richard Hatch, no?) He was willing to take the heat for his cosplay? Are you?

More on costumes at conventions below! I think they are GREAT!

And now, on to tips for you and your convention enjoyment, as well!

So this past weekend, despite my 15 years of comic book collecting, I attended my first comic book convention (Con). In some groups this is practically blasphemy, but this was the first chance I really had, so three friends and I traveled to New York City for the weekend to try it out. As you know (or might imagine if you’ve never attended a con), it is one of the most crazy experiences you’ll ever have. Somehow, I doubt I’m the first one to be so awed by all the that’s going on during my first trip, so I thought I’d give some tips for people thinking about attending their first convention from a man who just came from his first.

If there’s one huge mistake that I made going into the NYCC it was being completely disorganized about everything. There are so many panels, spotlights, and booths to visits that it is entirely too easy to lose track of time. That panel you really wanted to go see? It can easily fly past you without you every noticing. You might get too caught up looking through back issues of comics or playing unreleased video games or even just taking pictures of people in costume. Whatever it is that distracts, it takes no effort to completely forget there was something you ever wanted to see. What you need to do is check the schedule of all the events and plan everything out ahead of time and STICK TO IT! Even if you plan everything out, which I tried to do, if you decide to skip even one item on your list, you’re much more likely to skip them all. Instead, create a schedule where you leave time to explore the floor but prioritize what you most want to see most and try to deviate as little as possible from it.

This goes for both people planning to come in plain clothes and those that plan to cosplay, though I am admittedly much less versed in the arts and techniques of cosplay. Now I want you all to picture something; imagine a place where tens of thousands of people and literal tons of computers and televisions screens are all packed into one place. How hot do you think a place like that could get? If you answered pretty darn hot, then you’d be right. Though not as bad as it could be, the Jacob Javits center where NYCC was held could get quite uncomfortable and hot at times. Though I brought a sweatshirt to fight the cool New York fall morning, I soon had discard it and shove it into my backpack to prevent my body melting. I find khakis and a T-shirt to be ideal for the convention.
This leads me to next point: bring a sturdy bag that isn’t too cumbersome. Odd are, if you’re attending Comic-Con, you’re going to end up buying things. Possibly many things. You will also likely be there for upwards of 5-7 hours a day. So unless you think carrying all of the stuff you buy and all your free schwag sounds like fun, I would strongly suggest you bring something comfortable to carry it in. Also, make sure that whatever bag you bring isn’t too bulky. As I said before, there are thousands of people moving around and you will have to fight your way through them and it is really easy to get your bag caught on someone else or something. If you get it caught on the wrong thing, it could easily be expensive too. In fact, at one point this past Saturday, my girlfriend’s backpack got hooked on someone’s costume and she was nearly pulled down a flight of stairs. Try to avoid that.


Which leads me to the costumes. Now, I suck at sewing and wouldn’t know where to start anyway, so I don’t claim to know anything about cosplay. What I will say is, it seems horrendously uncomfortable to carry Pyramid Head’s, well, head around for hours at a time. Not only am I sure it’s as hot as the sun, but it just looks hard to see and move around in. If I were going to make a costume, I’d make sure it was agile and relatively cool. Now that being said, there are endless numbers of people out there that know more about the subject than me and, I’m sure that if you’re willing to make a perfect replica of Deadpool’s costume, then you’re prepared to take the heat and get stopped for pictures every few minutes. I’m not one to stifle creative thought, so don’t let my suggestions stop you from making that fully-functional Iron Man costume you’ve been designing, it’s just my thoughts of the subject.


Tip 3: Bring Money. And Lots of It (Or, How To Spend As Little As Possible)

As with nearly every event I’ve ever been to in America, be it baseball game or carnival, things can get expensive fast and New York Comic-Con is no different. Between the booths selling everything from comic books to corsets to body pillows (if you don’t know what these are, just Google “Japanese body pillows,” preferably not at work) to the food vendors, you can practically watch the money fly out of your wallet. I even bought a comic I already have two copies of exclusively to get it signed. Even if you’re just tagging along with a friend and you don’t like comics, movies, or video games, you’re still highly likely to find something that you want to buy. And don’t expect to find water bottles for anything less than four dollars, Anyway you play it, you will hemorrhage money so make sure you bring plenty. However, if you are on a budget, like me, there are some steps you can take to at least help the flow of your hard-earned cash.
First of all, set up some sort of budget for yourself. Take out a limited amount of money before the first day and hide your cards. Try and make yourself make that money last for all the days you’re their. In may case, I took out 100 dollars for the weekend and limited my spending to only things I really wanted and wasn’t likely to find elsewhere and managed to make it last me almost exactly for the trip. You might be surprised how just not letting yourself take more money out might save you some money.
Secondly, one thing that saved me a lot of money was eating right before going into the convention itself. Any food you get within the convention itself will be approximately four times as expensive than if you bought it anywhere else. Eating one good-sized meal before going in can save you a lot of money. If you find you’re intensely hungry during the day, don’t be afraid to leave the building to hunt down a restaurant; it’s not that hard to get back in (just make sure you check your schedule beforehand so you don’t miss any of your planned events.

Third, explore your options in all areas. Just because that one dealer has that piece of Mario memorabilia that you so desperately desire, doesn’t mean it’s the only one that does. Shop around and check everywhere; someone else may have that exact same piece for significantly cheaper. In my experience at NYCC, most of the dealers that set up shop at the con are actually really nice people. So if you’re worried that something might sell while you’re shopping around, just ask them to please hold onto it until you come back. Odds are, they’ll be willing to pull it from the shelf for a little bit to help you out. Also make sure that you check out your travel options. If you’re close enough to wherever the Con is, walk there. It’s goof for you and saves money, so why not. If you really need a ride check out whatever options the convention might provide. At least at NYCC, they had buses leaving for major areas of the city every fifteen minutes. I probably saved twenty or more dollars just riding these to within five blocks of where I was staying and walking the rest of the way.
Lastly, follow your instinct when making purchases. You’re bound to see dozens, if not hundreds, of things that you want to buy while touring the floors, but that doesn’t mean you need anything you see. Especially if you have budgeted in a way like I suggested, there will be many things you want that you won’t be able to get. Follow your instinct in deciding what items are actually worth spending money on. I know that that $100 dollar live size Pikachu cut-out is screaming for you to but it, but that doesn’t mean that you should. Now, if there’s a comic book you’ve been searching cross-country for years for and you finally find it in a bin of a small dealer for ten bucks, then that might be worth it (and for me it was).

This last tip probably sounds incredibly lame and cliché, but it is important to remember nonetheless. There are likely going to be times where you’re going to encounter someone that rubs you the wrong way or something just plain goes wrong. Maybe you someone bought the last copy of a specific issue you wanted or some took the last spot in a panel you wanted to attend. It’s easy to get angry is these situations, but just remember, you went to the Con to have a good time and hang out with people that have the same interests as you. So even if something doesn’t go the way you want, just move on and find something, or someone, to have fun with. There will always be something else for you to do or someone else to me, so just go have fun and don’t let anything ruin your experience. I hope that, at the very least, this list of guidelines for first time Con-goers will help you make the most of your first convention.
Posted by Eva Ink Artist Group at 8:15 AM