Spider-Man Foils Would be Thief! 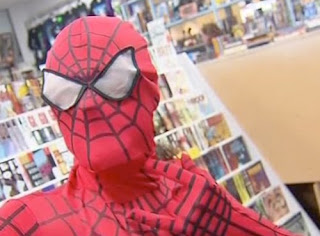 No, it's not a comic book plot but the scene which unravelled in a Australian book store on Saturday.

The 45-year-old called for back-up and the hapless thief was surrounded by superheroes within seconds.

Mr Baulderstone said: "We had about 40 people dressed up as their favourite superheroes to celebrate International Free Comic Day, so he didn't have much of a choice but to hand the comic back after a little bit of a scuffle.

"Everyone in the store thought it was a play, that it was street theatre of some sort. It wasn't until I said 'call the police' that people started to realise.

"One of the funniest things about the incident was that I called for people to stand near the door and it just so happened we had people dressed as Jedi knights there blocking the exit, the Flash was there at some point too.

"It was a bit serious at the time, but now we're looking back laughing at what greeted police."